Dr. Dana Johnson was honored for her contributions in Quality this spring by the American Society for Quality.  She received ASQ’s 2016 Gryna Award for co-authoring the paper, “SEM of Service Quality to Predict Overall Patient Satisfaction in Medical CLinics: A Case Study,” published in 2015 in Quality Management Journal, Vol. 22,  No. 4 pp. 18-36.  The ASQ Gryna Award is for the largest single contribution to the extension of understanding and knowledge of the philosophy, principles, or methods of quality management.  Dr. Johnson’s co-author, Dr. Roberta S. Russel, is a Professor of Business Information Technology at Virginia Tech.  Both authors thank Elizabeth MacInnes, V.P. Quality, UP Health Systems Portage and James Bogan, UP Health Systems Market President for providing access to the data necessary to complete this research.

ASQ is a global community of people dedicated to quality who share the ideas and tools that make our world work better. With millions of individual and organizational members of the community in 150 countries, ASQ has the reputation and reach to bring together the diverse quality champions who are transforming the world’s corporations, organizations and communities to meet tomorrow’s critical challenges. Celebrating 70 years in 2016, ASQ, with its world headquarters in Milwaukee, Wis., USA, operates regional centers in the U.S. and Canada, North Asia, South Asia, Latin America and Middle East and Africa. Learn more about ASQ’s members, mission, technologies and training by visiting the ASQ webpage.

On Monday, April 18th fifteen students and one faculty member were inducted into  Michigan Technological University’s chapter of Beta Gamma Sigma.  The ceremony was lead by Chapter Advisor and faculty, Sheila Milligan.  Beta Gamma Sigma was founded in 1913 as the first national honor society in business, and was a merger of three separate societies established to honor academic achievement in business at the University of Wisconsin, the University of Illinois, and the University of California.  Today Beta Gamma Sigma is an international honor society that provides the highest recognition a business student anywhere in the world can receive in an undergraduate or graduate program at a school accredited by AACSB International. 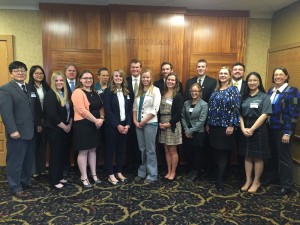 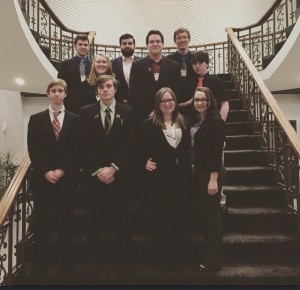 tudents from Michigan Tech’s chapter of Distributive Educational Clubs of America (DECA) attended the State Career Development Conference over spring break. The competition has three different types     of events which include case studies, business simulations, and prepared events. The students are given thirty minutes to an hour to prepare the event depending on the type, and then present their findings to judges who grade them based on specific performance indicators. For the business simulations and case studies, no outside materials are allowed. The competition is designed to take the knowledge students learn inside the classroom and apply it to real world problems. The judges are professionals from that specific area meaning that the judge typically works for a firm within that industry and/or holds certifications which makes them competent to judge the event. This year, eleven members from Michigan Tech attended the conference, and nine qualified for the International Career Development Conference. Ken Arndt placed third in the corporate finance event, and Cassandra Barry (pictured below) placed first in the accounting event. In Michigan Tech’s chapter of DECA, placing first in any event had only occurred three times, once when the chapter was established, and twice in 2013. 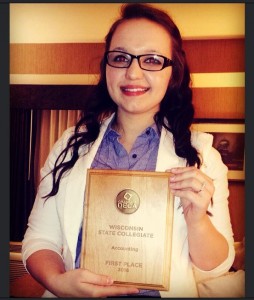 Superior Filament, led by Cedric Kennedy, Aubrey Woern and Jos Krugh, brought home a $10,000 Best Technology Award, as well as another $1,000 for Best Pitch and the $250 Audience Choice Award.

The student-run company is developing filment for 3-D printers from recycled plastics to support growth in the 3-D printing industry while reducing environmental impact.

We Inspire, led by Arick Davis, won the $10,00 Korson Family Highest Growth Potential Award. We Inspire is developing an online system and community to help students make informed career choices by connecting them with profiles and feedback from practicing professionals.

The Pavlis Honors College helped sponsor the event financially.  The student teams received support from Michigan Tech’s Innovation Center for Entrepreneurship, the School of Business and Economics and the MTEC SMartZone.. 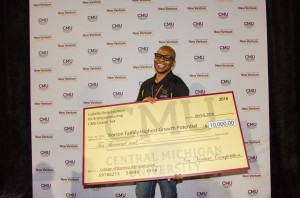 Outstanding students, staff and a special alumna were honored on Friday, April 17th at Michigan Tech’s 21st Annual Student Leadership Awards Ceremony. The event’s keynote speaker was also the winner of, perhaps, the most prestigious award presented. Britta Jost, ’02, ’04 received the 2015 Outstanding Young Alumna Award. Jost is senior engineer in large structures design engineering for Caterpillar. In her remarks, Jost recalled the changes that have occurred since her days as a student, most of them in technology and social media.

“Back then, if a speaker looked out and saw the audience looking down, she would have thought they were bored or disinterested,” she said. “Now I know you’re posting my remarks on Twitter.”

Jost said the most important aspects of a Michigan Tech education have not changed since her time here a decade and half ago.

Perhaps the most prestigious undergraduate award, the Presidents Award for Leadership, was presented to Kim D’Augustino, a double major in Materials Science and Engineering and Biomedical Engineering. President Glenn Mroz cited D’Augustino’s numerous accomplishments including serving as vice president of the biomedical engineering society, mentoring students through the Wahtera Center and the ExSEL program and acting as event coordinator at the recent, highly-successful, campus Relay For Life.

Dallas Linville, was the recipient of the Vice President for Student Affairs and Advancement Award for Service, Nate Peterson received the Exceptional Leadership in Student Governance Award, the Exceptional Enthusiasm as Student Leader Award was presented to Luke Dalton and the Student Employee of the Year was awarded to Taylor Driscoll.

The Rising Star of the Year, presented to a first or second year student showing great potential for leadership, was awarded to Keagan Fortier. Britta Anderson was named Outstanding Future Alumnus or Alumna. The award is presented to a student already living the Alumni Association’s motto of “Celebrating Traditions, Creating Connections.”

Other awards handed out included:

This article was originally written by Mary Wilcox and posted in the April 22, 2015 edition of Tech Today.