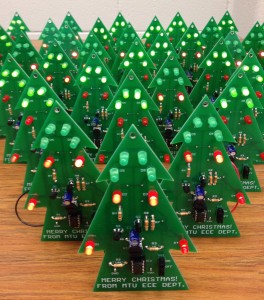 I wish I could say I wrote the poem below, but alas, all I did was look it up on the Internet. I don’t know what is more remarkable – that someone can be so creative that they can come up with stuff like this, or that we have created a world in which at 11pm the night before a column is due, one can search on “electrical engineering night before Christmas” and something like this instantly appears. Either way, I wish all the readers of this blog a joyous holiday season and the happiest of new years. Enjoy! – Dan

Twas the night before Christmas and all through production,
We were measuring current and checking induction,
Capacitors mounted, diodes seated with care,
In the hope that the circuit soon would be there.

All ICs positioned, each pin seated right,
Our soldering irons were turned off for the night,
Transistors were stowed, not a circuit was shorted,
And resistors all packed, by ohms they were sorted.

But still one more task lay ahead, just for me –
Another few hours on my new PCB,
Just for good measure I gave it a poke,
And the 15 volt rail went up in grey smoke.

Electrolytic capacitors popped and went bang,
Resistors went meltdown, connectors snapped with a twang,
The PSU – open circuit, the current killed diodes,
So I snatched up the solder and reached for my probes.

I pulled out my meter, I prodded and twiddled,
First blew out the ground rail, then re-routed and fiddled,
An inductor coil here and there a resistor,
Transplanted an IC, cross-connected transistor,

A diode reversed and an upgraded cap,
A little more solder to bridge a small gap –
My tolerances tiered to the umpteenth degree,
But still it lay lifeless, that damn PCB!

Then out in the main lab I heard such a clatter,
I tore off my wrist strap to find what was the matter –
In the anti-stat bay a fine sled had appeared,
With reindeer and earth-strap and a man with white beard.

His fine stamping reindeer were led, I did see,
By one whose bright nose was a red LED;
Trimming their harness were components and bits,
Bright coded resistors and surface-mount chips.

The white-bearded man tipped open a sack,
And like jewels some components trickled out of his pack,
With a nod and a wink he heated my iron,
And laid down a fresh circuit of finest gold wire.

Some ICs he placed with great care on the board,
Along with transformers from his own gleaming hoard,
The board was soon finished, held up for inspection,
All test points in place, all power rails checked on.

Then he gathered his meter, his twiddlers and tools,
Scooped up the components which lay like bright jewels,
Gave me a handful and said with a wink,
“I’ve twiddled the RF, please see what you think.”

His sled with its diodes all flashing and bright,
Clattered out of the anti-stat into the night,
Just ‘fore he vanished he reached over his shoulder,
Threw me a new wrist-strap and a big reel of solder.

“On Henry! On Farad! On Voltage and Ohm!
On Ampere, Transformer, reverse-fitted Diode!
We’ve surface-mount circuits and more things electronic!”
As he took to the skies and he went supersonic.

But I heard him exclaim as he vanished from sight,
Merry Christmas to all, and to all no short-circuits!! – author unknown