The Jackson Center for Teaching and Learning (CTL) will recognize Chris Middlebrook (ECE) and Josue Reynoso (COB) as co-recipients of the 2022 CTL Instructional Award for Curriculum Development and Assessment on Tuesday (Nov. 8) at 3:45 p.m. Middlebrook and Reynoso were selected for the award after being nominated via the Deans’ Teaching Showcase during the spring 2022 semester.

Please plan to join us in recognizing their accomplishments by registering for the event.

From the abstract:
Why Michigan Tech? Why go to school there? Why hire Michigan Tech engineering grads? What skills do they possess that are lacking in other engineering grads? A consistent answer to these questions is the hands-on laboratory experience students have throughout the engineering curriculum. The response is echoed with the hundreds of companies that continuously recruit Michigan Tech Engineering students. Laboratory experience increases student knowledge retention and fosters a deeper understanding through direct concept application. However, the creation of a new course with a laboratory component can often be a daunting task to faculty and staff given the amount of time and the number of resources that are often required. In this talk I will share my experience with the creation of a formal course and laboratory on Printed Circuit Manufacturing utilizing prior research equipment coupled with existing infrastructure and corporate participation and in-kind donations. The outcomes and ancillary activities associated with the course and lab, such as the building of the new Plexus Electronics Maker Space, will also be discussed.

By the Jackson Center for Teaching and Learning.

The Institute of Computing and Cybersystems has announced the winners of the first Computing[MTU] Showcase Poster Session. Among the winners were electrical and computer engineering graduate students Evan Lucas and Steven Whitaker for “Active learning with binary feedback on multiclass problems,” who were tied for second place with Suresh Pokharel of Computer Science.

An active learning approach is often used for multiclass classification problems, where predictions are made on new data and a human user is used to determine if the predictions are correct. Typical approaches may ask a human to select the correct class if the prediction is incorrect. This work attempts to use a binary feedback on the predicted classes to save time and allow maximal use of a negative prediction on a partly trained model.

Anna Browne was selected to receive the President’s Award for Leadership. Brown is pursuing a degree in electrical engineering with a concentration in electrical power. She has shown excellent success during her time as a student. Her involvement and contributions to Michigan Tech’s campus are numerous and cast such a wide net as shown in her 13 nominations.

Anna, who has had multiple internships at Black & Veatch and Westwood Professional Services, has served in project and team leader roles with the Alternative Energy Enterprise on projects like the Baraga Community solar and the on-campus mine water geothermal system. She’s been an active part of the residence education and housing services community as a senior student resident assistant and resident assistant for three years.

She’s also been a valuable contributing member to the Center for Diversity and Inclusion community. Anna has left a mark on Michigan Tech’s community. In her essay she writes how she strived to be a role model for others through community building.

She wrote, “Through my Michigan Tech Experience, my values of leadership, community, openness, and integrity have been demonstrated through every aspect of my involvement. In trying to create a supportive community, I have strived to give a sense of comfort and belonging to those without a place. Michigan Tech has helped me find my values and my identities, and I hope through my involvement that I have left a positive mark on Michigan Tech as it has left on me.”

By Student Leadership and Involvement. 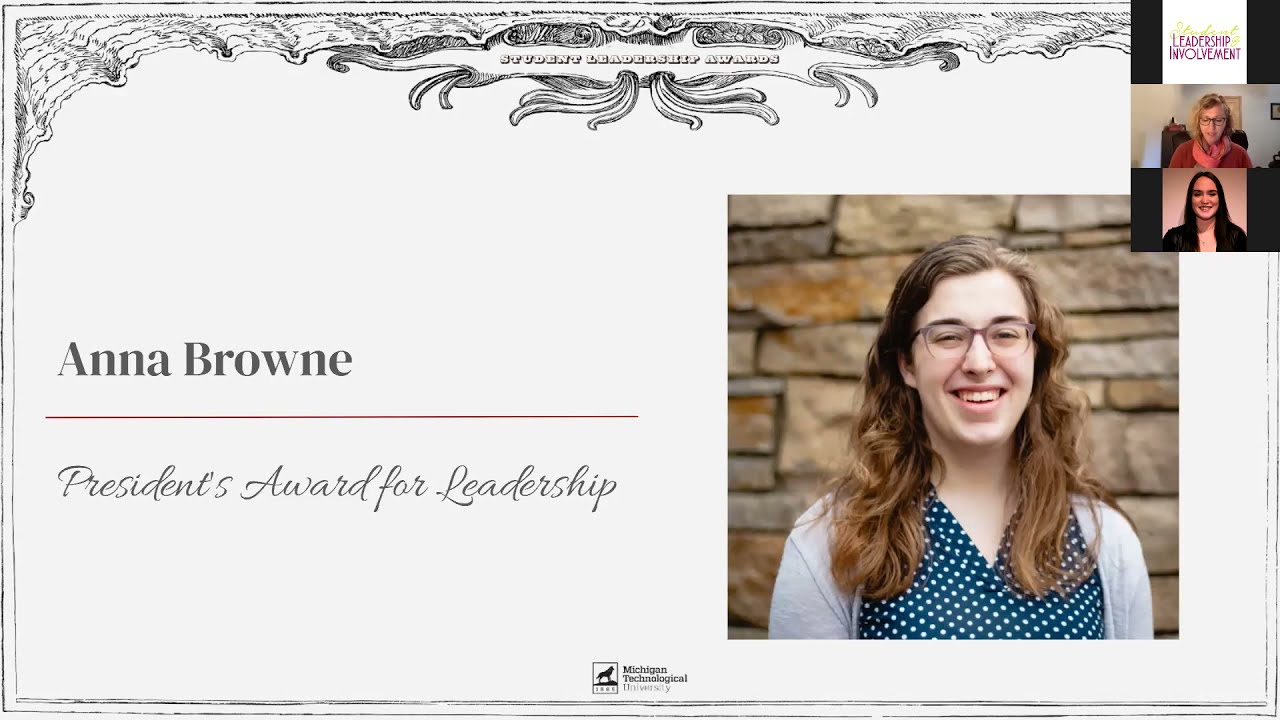 By Student Leadership and Involvement. 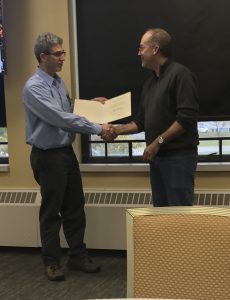 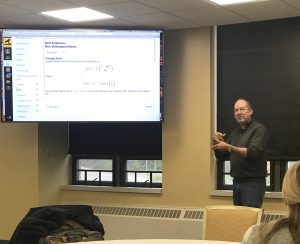 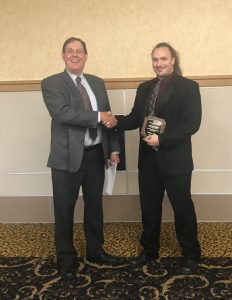 James Davis is the 2019 recipient of the Jonathan Bara Award, an award given each year to an outstanding teaching assistant in ECE. This endowed award was set up by the family of Jonathan Bara, a 1975 electrical engineering master’s graduate who suffered a heart attack and passed away at the young age of 25. The award was presented at this fall’s Graduate Student Banquet held on September 23rd. 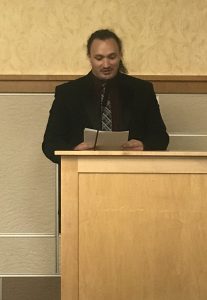 James then accepted the Matt Wolfe award on behalf of the 2019 recipient, Wyatt Adams.  The award was set up by the family of Matt Wolfe, a 1992 BSEE graduate and MSEE candidate who was tragically killed in an automobile accident. 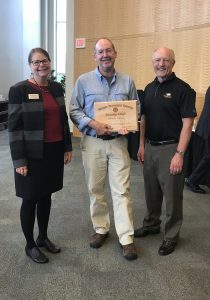 The Department of Electrical and Computer Engineering held its Spring 2019 Senior Banquet on Thursday, April 18. Sam Solverson was the winner of the 2019 ECE Departmental Scholar Award, given to a senior who best represents student scholarship at Michigan Tech. This outstanding student is considered excellent not only by academic standards, but also for participation in research scholarship activity, levels of intellectual curiosity, creativity, and communication skills.

Sam was nominated by instructor John Pakkala. “He took an informal, voluntary, but strong leadership role in the Fall 2018 Design Fundamentals course. I have witnessed his good work in both Chamber Choir and in Wind Symphony. And his GPA is hard to beat!” Associate professor Roger Kieckhafer says, “ In EE 3173, he scored THE highest grades in the class. He even installed Quartus on his own laptop (which makes him a braver man than me). In EE-4173 and EE-4737, he is currently scoring a perfect 100% in both classes. He has installed IAR Workbench on his laptop and is purchasing the eZ430 development hardware. He found a typo in one of my lectures, because he actually read the datasheet in the references. I think Sam completely embodies the best that we can ask for in a student.” Academic advisor Judy Donahue noted, “He’s been very helpful with ECE recruiting events – all of them! And he is a member of the Aerospace Enterprise.”

The 2019 ECE Woman of Promise was awarded to Katelyn Rhue.  The goal of this program is to recognize women at Michigan Tech who go “above and beyond” what is expected of them in terms of being a well-rounded student – one who has demonstrated academic achievement, campus and community leadership, good citizenship, creativity, etc. In short, women who exemplify the early-on criteria that would be considered when selecting future inductees to the Presidential Council of Alumnae.  he departments’ Women of Promise are recognized at the annual Presidential Council of Alumnae (PCA) Induction Ceremon/Luncheon held during the Fall semester. Recipients are also invited to other PCA activities where they have the opportunity to provide input on a variety of topics.

Katelyn was nominated by assistant professor Jeremy Bos. Jeremy noted, “Katelyn is the current student director of Robotics Systems Enterprise. Last semester Katelyn was assistant director and took on as her management project a RSE team bonding activity. Katelyn organized and executed the event so that the enterprise was involved and included; we had nearly 100% participation. During the actual event, she facilitated the activities and made sure they were actually social. This is Katelyn’s third management position in RSE having started as outreach coordinator. In every position she has been the example to her peers on how to do the job. Katelyn is a natural leader and the ideal candidate for the Woman of Promise award.”

The 2019 Carl S. Schjonberg Outstanding Undergraduate Student Award is awarded annually to an outstanding undergraduate student who exemplifies a dedication to learning and a commitment to the University. Professor Schjonberg was a faculty member in the Electrical Engineering Department from 1936 to 1970. He contributed significantly to the growth and development of the department and was dedicated to the education of electrical engineering students. This endowed award was established by his wife as a memorial to his long and dedicated career as an educator. This year, the award was given to Lucas Simonson.

The ECE External Advisory Committee (EAC) is a collection of volunteers from many different industries whose goal is to ensure the ECE academic program is aligned with industry to produce graduates companies would want to hire. Each year at their spring meeting, the EAC members observe ECE’s senior design and enterprise team presentations and poster displays and select a team that best meets or exceeds specific criteria related to today’s industry needs. The Larry Kennedy Industry Innovation Award is given to the senior project that shows the highest level of project management, applied engineering and application to industry. Larry Kennedy served on the EAC for many years and succumbed to illness while serving as chair.

Each year, the Eta Kappa Nu Honors Society (HKN) polls the ECE student body to select the winner of the Professor of the Year award within the ECE Department. This fun event at the end of the Spring semester allows ECE students the opportunity to thank and encourage outstanding ECE faculty. The award is presented at the Spring Senior Banquet.  The 2019 HKN Professor of the Year was awarded to Kit Cischke – again! Kit also won HKN Professor of the Year in the 2012-2013, 2013-2014, and 2015-2016 academic years.  Says Warren Kretteck, HKN president, “Kit is an exceptional professor who always breaks down difficult information in a way that is easy to understand and fun to learn. I have had him for a few classes  and it is no surprise that he has won the Professor of the Year Award before. With the way he teaches and his involvement in the department, you can tell he is dedicated to student learning.”