Fridays with Fuhrmann: Under the Radar 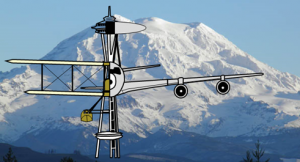 Greetings one and all from beautiful Seattle, Washington, where I have been attending the 2017 IEEE Radar Conference. It has been a nice change of pace to immerse myself in a technical environment, catch up with some old friends, and think about some problems that I have not visited in some time.

Radar is an interesting field. In many ways it is the perfect field for EEs, since it covers just about everything that is electrical engineering and includes almost nothing that is not. To understand radar systems one needs to understand electromagnetic wave propagation, electronics, antennas, amplifiers, signal processing (a lot of signal processing) and computing hardware. As in almost all technical fields the computing piece is becoming more and more important, since the advances in speed and reduced size and power of the electronics, combined with advances in computational intelligence, are making possible applications that no one would have thought possible 10 or 20 years ago. Radar is also a pretty weird field to study from the academic side, since most of the applications to date have been in the military and defense world, and not being in that environment all the time one is never sure if the theoretical work is fully relevant to real applications. That hasn’t stopped me from moving ahead (in fits and starts, admittedly) and it hasn’t stopped some of my colleagues outside of academia from showing interest in my work over the years.

Conferences like this are a nice mix of the technical and the personal, and often drive home the point that it is the people that get the work done. On the personal side there were two very nice moments for me. One was seeing Dr. Marco La Manna, my first PhD student at Michigan Tech, present our joint paper on hybrid-MIMO radar signal processing. Marco is just starting out his career as a post-doc at the University of Wisconsin-Madison. He did a fine job with the presentation and fielded questions well; I was happy and proud of him. On the other end of the career arc, one my first PhD students back at Washington University, Dr. Frank Robey, was recognized for being elevated to IEEE Fellow status. Frank is my first PhD student to reach this milestone, so again I was happy and proud. I made IEEE Fellow myself back in 2010, and ironically our joint work that was part of Frank’s PhD dissertation played a big role in that. Our paper “An Adaptive Matched Filter Detector” published in the IEEE Transactions on Aerospace and Electronic Systems in 1990 with two other authors, is my most-cited paper, and Frank is the first author. Frank has gone on to a very distinguished career as a radar engineer for MIT Lincoln Laboratory, and he knows a lot more about how radar really works than I ever will. I was Frank’s advisor for four years, but he has been my advisor ever since. It is great to see him get the recognition he deserves.

Coming to a conference like this is like putting on an old shoe. There is a familiar cast of characters: the curmudgeon who stands up and says that your work was done 50 years ago, the young engineer who is nervous and shy, the older seasoned engineer with too many slides, and the guy who gets unnecessarily positioned about the superiority of one technology over another. There are an awful lot of talks that appear to be a new mix of a lot of old concepts and buzzwords, and one is never quite sure if the speaker is really moving the state of the art forward or just reinventing the wheel. What is clear is that technological progress never moves in a straight line. There is a lot of going around and around in circles as the level of understanding in a technical community reaches critical mass to actually make something new happen.

I couldn’t help but notice one change in the conference dynamic which is a result of the ubiquitous smart phone. There is a lot of good conversation in the hallways as there always is, but there were also a lot of people off to the side checking their texts and e-mail. A lot of people were doing the same during the talks, usually at the back of the room when the talk got a little boring. I caught myself doing it too! Staying fully present in this environment is actually quite difficult, for me anyway, and cell phone addiction does not help.

A conference like this can be considered a success if one comes away with at least one new idea or the recognition that the field has changed in some significant way. The most striking thing for me was a presentation on the Google Soli project, which is putting micro-radars into small personal devices like smart watches, to track finger and hand gestures as part of a user interface. Just do a search on “Google Soli” and you can see all about it; it is very cool. This project demonstrated for me the potential that exists in the commercial world for moving technology forward. Even though I did not see much in this conference about automotive radar, it did make me think that there could be a lot of advances coming to support autonomous vehicles also. Given our level of interest in robotics, control, and automation in the Michigan Tech ECE Department it would probably be worth my while to find out as much as I can. The presentation itself on the Google Soli project totally raised the bar in terms of speaker polish and audio-visual aids. It put the rest of us PowerPoint hackers on notice that we need to raise our game if we are going to stay competitive.

Back in the office next week, and with luck it will be spring in the Keweenaw. Hope springs eternal, as it does at the beginning of every summer, that some of the inspirations from this week will turn into concrete results before the start of a new school year.