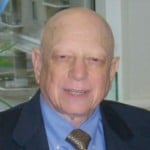 Dr. George A. Hazelrigg is the Deputy Division Director of Civil, Mechanical & Manufacturing Innovation (CMMI) at the National Science Foundation. He presented two special seminars at Michigan Tech on Thursday, September 24 for faculty and students. His visit to Michigan Tech was sponsored by the Department of Mechanical Engineering-Engineering Mechanics, and the College of Engineering.

See the Video: Engineering Michigan Tech Channel on Vimeo Video: The Engineer as a Decision Maker

Abstract:
While the overall success rate for proposals submitted to the National Science Foundation and other Federal agencies tends to be rather low, for well written proposals, it can be rather high. Furthermore, it is rather easy to identify the key elements of a well written proposal. Top among these for NSF are a well written and concisely stated research objective and a plan to accomplish the stated objective. Although this sounds both obvious and simple to achieve, surprisingly few principal investigators meet this requirement. This talk will focus on how to frame a research project in a way that will dramatically increase the PI’s probability of success. It will distinguish between science, mathematics and engineering, and discuss the nature of fundamental research underlying each. It will then present templates for framing research projects.

GEORGE A. HAZELRIGG
Bio:
George Hazelrigg enjoyed designing and building things when he was young, so he decided to go to college to study engineering. He obtained a BS in mechanical engineering from Newark College of Engineering (now New Jersey Institute of Technology) and went to work for Curtiss-Wright. There he found that his education had utterly destroyed his abilities to do engineering design. So he felt it necessary to get a master’s degree. Hecompleted an MS in mechanical engineering, also from NCE, but still hadn’t regained his design abilities. While getting his MS, however, he did some teaching and liked it. So he figured that if he couldn’t do design, the next best thing would be to teach it. Five years later he had obtained MA, MSE, and PhD degrees in aerospace engineering from Princeton University. Now, in addition to not knowing how to do design, he couldn’t teach it either. For the next 25 years he roamed industry and academe in an attempt to understand the theory of engineering design, including time spent at the Jet Propulsion Laboratory, General Dynamics, Princeton University and a consulting firm of which he was a co-founder. He also spent a year in Korea helping to found the Systems Engineering Department of Ajou University. He joined the National Science Foundation (NSF) in 1982 as program director for the Engineering Design program, providing support to others in the field. In January 1996 he did a stint as Station Science Leader of the US South Pole station. In 2004 he became Program Director for the NSF Manufacturing Machines and Equipment program, and then Deputy Division Director of NSF’s Civil, Mechanical & Manufacturing Innovation (CMMI) Division. He also served as Program Director of the Sensors and Sensing Systems program. For relaxation he spends his weekends soaring over the Shenandoah Valley as a certified flight instructor in gliders (CFI-G) with about 1,800 total flying hours.