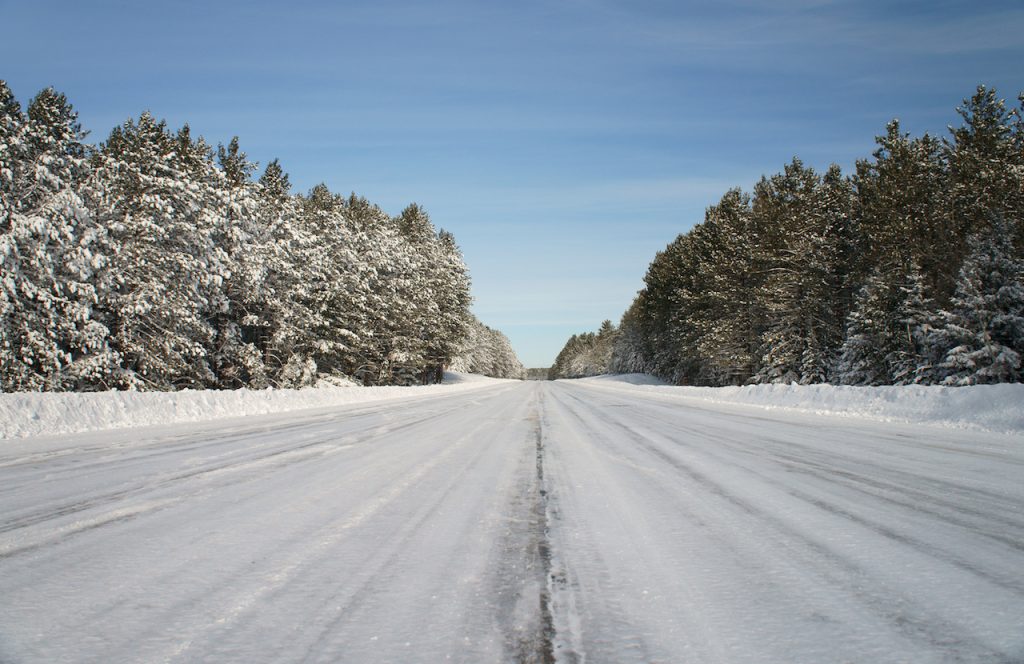 It’s the first week of March and so far we’ve had 175 inches of snow in Houghton County, with another couple of feet expected before the spring thaw. Despite all the snow, we manage to get around pretty well (most of the time). Snow scientist Russ Alger ’80, ’81 explains just what goes into the UP’s ‘secret sauce’ for safe winter roads.

Russ Alger knows about snow. The head of Michigan Tech’s Institute of Snow Research is one of the world’s go-to guys for research on cold climate driving issues, with more than 25 years of experience and counting. Since earning his BS and MS in Civil and Environmental engineering Michigan Tech, Alger has developed a snow grader that can “pave” snow trails in Antarctica, and a product called SafeLane, an epoxy-aggregate mixture that is applied to roads, bridge decks, walkways and parking lots to give the surfaces better traction by reducing snow and ice. SafeLane is now marketed by Cargill and used widely, saving untold lives.

You are a snow scientist. How did you come to choose this path, or did it choose you?  My father, George Alger, was a civil engineering professor at Michigan Tech for many years. His expertise was in ice-covered rivers and cold regions engineering in general. Growing up in Dollar Bay and working with him on outdoor projects, as well as being an outdoorsman myself, pointed me down that path at a young age.  In 1976, my Dad, along with Michigan Tech civil engineering professors Ralph Hodek and Henry Sanford established a curriculum on Cold Regions Engineering. I started with them that very first year.

Are there best practices for using salt on roadways in winter? Road supervisors and crews rely heavily on the weather forecast.  Air temp, pavement temp, temperature trends, precipitation rates and total amounts, wind, time of day, and more all play into the decision making process. For example, if it is going to be below 15o F, it is likely that crews would consider adding something like calcium chloride to the mix since it is better at colder temps. They might just use sodium chloride above that temp since it works well and is much cheaper.  The amount of deicer needed also increases as temperature decreases and there is a point where it doesn’t pay to use deicer at all except for maybe as a “kicker” for sand applications.

Combining salt and stamp sands seems to work pretty well to help us get around amid all the snowfall here in the UP.  What all goes into it? Each maintenance entity uses a sand that is easiest in their operation. It depends on availability, and cost—where cost is actual material cost and transportation to the central staging areas. As it turns out, in most of Houghton County, stamp sand is used. It’s abundant, and the County owns some stamp sand property. On top of that, stamp sand is actually a pretty good ‘grit’ for this purpose. The grain size is right to result in traction, which is the purpose of sand. It isn’t too dusty, and most importantly, it is crushed rock, so it is angular. That means it has sharp edges that help it dig into icy pavements and grip tires. The addition of a small amount of deicer, mainly NaCl and CaCl2 liquid helps the sand piles from freezing up, but is also very effective at helping the sand particles to stick on the ice surface. A small amount of deicer makes the sand particles melt into the surface and stick, making a layer that acts like a piece of sand paper. This is a pretty effective way to increase grip of tires on the surface, which is the end goal of this operation.

“Winter road maintenance is a science in itself, a very complicated undertaking. Each geographic location has its own challenges and ways of doing things that have evolved over the years. That said, there really is no miracle method.”

Are any elements of winter road prep unique to this area? As you drive across the UP and into Wisconsin and Lower Michigan it is evident that each entity has its own way of doing things.  Driving west through Twin Lakes and into Ontonagon County this is also quite evident. Each group has its own way of using deicers and each has a unique type of friction course (sand) that they use. The northern UP is also quite unique, as we get so much snow. Heavy snow areas are sometimes difficult areas in which to use deicers, since it takes so much chemical to keep up with the amounts of snow.

Within Houghton County a number of different entities perform our snow removal operations. MDOT takes care of the State and Federal trunklines, Houghton County takes care of all secondary roads, and some of the larger cities in the area take care of their own streets. Each of these entities have their own way of doing things. In fact, across the UP, there are counties that even take care of their own State and Federal Roads. There are some major difference in operations as you drive across the UP in a storm event.

Do you see any room for improvement?  There are always ways to improve, but in my experience traveling across the US and Canada through numerous storm events, our local entities have gotten really good at dealing with the extreme amounts of snow that we get. It always amazes me how well we can move around the Copper Country during and very shortly after a snow event. Hats off!!

Why does it seem that so many places elsewhere in the country are unprepared and shut down when even a few inches of snow falls? In areas that don’t get much snow, and not very often, it is hard to justify spending a lot on winter equipment and supplies. That has been a big problem this year since so much of the country is getting record snows.  On the other side of the coin, some areas, including some wealthier Detroit suburbs, the public has pushed for roads to be bare pavement at all times. These areas spend a lot of money on snow removal.

Could our method(s) be replicated and shared with other cities and towns? As researchers we always want to share or work and ideas with others. I’ve done a lot of deicer research over the years, some of which is public domain and some is for private companies.  We have also done a lot of work on methods over the years such as when to put deicers out, how to put them out, how much, how often, how to predict, and more.