Above and Below the Mackinac Bridge: Kim Nowack and Amy Trahey

Amy Trahey and Kim Nowack generously shared their knowledge on Husky Bites, a free, interactive Zoom webinar hosted by Dean Janet Callahan. Here’s the link to watch a recording of his session on YouTube. Get the full scoop, including a listing of all the (60+) sessions at mtu.edu/huskybites.

These two extraordinary fellow civil engineers and friends who each know the Mackinac Bridge, aka Mighty Mac—one of the world’s leading suspension bridges—like the back of their hand. Together they explain just what it takes to properly care for such a huge gem, the single greatest asset of the state of Michigan.

Kim Nowack is executive secretary of the Mackinac Bridge Authority. Amy Trahey is president and founder of Great Lakes Engineering Group. Both are graduates of Michigan Tech, too: Nowack earned her BS in civil engineering in 1985, and Trahey earned hers in 1994.

Nowack is ultimately responsible for its safety, operation and maintenance. Putting it mildly, Nowack has vast experience and familiarity with the Mackinac bridge, nearly 20 years worth, and then some.

Prior to her tenure at the bridge, Nowack held several positions with the Michigan Department of Transportation (MDOT), including stints as a general engineer with the department’s construction division in Kalamazoo; project design, construction and assistant resident engineer in St. Ignace; and delivery engineer at MDOT’s Newberry Transportation Service Center (TSC).

Nowack frequently gives presentations about the bridge to fellow engineers, aspiring engineering students, and middle and high school students interested in the STEM fields. Recently in recognition of that effort, Nowack received the 2021 Felix A. Anderson Image Award from the American Council of Engineering Companies (ACEC) of Michigan, noting her contributions to enhancing the image of the engineering profession.

“I’m thrilled to have been selected for the Anderson award,” she said. “It’s amazing to be the first female honored this way. It’s been so rewarding to be an ambassador for the bridge and the civil engineering profession throughout my years at the Mackinac Bridge Authority.”

Trahey nominated Nowack for the award. “Kim is the epitome of why civil engineering is so awesome,” she said. “Kim has been an inspiration to me personally as a fellow civil engineer and to many others in the industry, too.”

At age 28, Trahey founded Great Lakes Engineering Group (GLEG), a civil engineering consulting firm. GLEG’s core business: everything bridges. The firm has been successful in providing bridge design, bridge inspection, and bridge construction engineering services for state and local governmental agencies as well as private clients. Trahey has worked on some of the largest and most complex bridges in the state of Michigan including I‐75 over the Rouge River, the Belle Isle Bridge, the Gross Ile Bridge, the International Bridge, and the Houghton-Hancock Lift Bridge.

In 2012 Trahey, along with other engineers and divers at Great Lakes Engineering Group, performed their first underwater safety and structural inspection of the Mackinac Bridge.

“This opportunity was a defining moment in my career,” she said. “It brought my journey full circle and provided a true sense of fulfillment. If you can dream it…you can do it!”

In 2017 Trahey earned her SPRAT certification (Society of Professional Rope Access Technicians), which means she can use ropes to inspect difficult to access bridges and climb bridges. “It was the most physically and mentally challenging training I have experienced to date,” she says.

“A bridge is a structure that spans obstacles, providing safe passage over something that is otherwise difficult or impossible to cross. It’s a soaring metaphor that captures my spirit.” she says. “I try to see obstacles not as obstacles, but as opportunities to solve problems and connect people. “To me, the Mackinac bridge is not only an iconic structure that resonates with all Michiganders—it proves that engineering has no limits, and it’s all about connecting people.”

Amy, how did you first get involved in engineering. What sparked your interest?

I was born and raised in Lansing, Michigan and lived in the Upper Peninsula for 4 years while attending college at Michigan Tech. I knew I wanted to be a civil/structural engineer, after the years driving to the U.P. over the Mackinac Bridge, seen in all its glory when we would take the ferry rides to Mackinac Island, as well. Chicago also inspired me with its movable bridges along the Chicago River and its soaring buildings. I feel grateful and fortunate to have found my passion (bridges) so early in my career. As a result I have realized my goal to climb to the top, and dive to the bottom of many of Michigan’s most iconic bridges. From the Houghton‐Hancock lift bridge and the Zilwaukee bridge to the International Bridge in Sault Ste. Marie, the Blue Water Bridges, and the gem of the state of Michigan–the Mackinac Bridge.

I’ve been married to my husband, Brian for 22 years and we have 2 sons, Ty and Quinn. We live in Grand Ledge, and share a family cottage on Drummond Island in the Upper Peninsula. I like to hike, ski, dive, bike, travel, and practice yoga and meditation. I also serve on the Michigan Department of Education, Special Education Advisory Committee, a committee that is near and dear to my heart and advocates for the rights of students with disabilities such as my son, Quinn, who is Autistic. In 2012 Quinn started planning family trips to iconic locations across the world. Seeing the world through his unique lens is inspiring and we are grateful for his perspective. He has quite literally, opened up our world.

Kim, how did you first get involved in engineering? What sparked your interest?

My high school teachers lead me into engineering based on my abilities in high school.  I’m so thankful I had forward looking teachers that thought females should pursue whatever they were interested in.  I didn’t know what kind of engineering to go into, but was coached that I had an aptitude to go down the engineering path. I wanted to find a career that used my knowledge and skills to their maximum advantage. And my Mother was very supportive for me to reach as high as I could in life (my father died when I was 11).

I grew up in Grand Rapids and now live in Ignace, close to the bridge. I’m an avid reader, in several book groups. I knit, and I’m in a quilt group, too. I have a daughter, Angela, and two toddler granddaughters. I love spending time with them as much as possible. One of my best memories is with Angela. She was my little cheerleader and traveled with me to Houghton when I taught at summer youth programs. I will never forget her sitting in the lecture hall with the students and giving me a thumbs up before my show when she knew I was nervous. 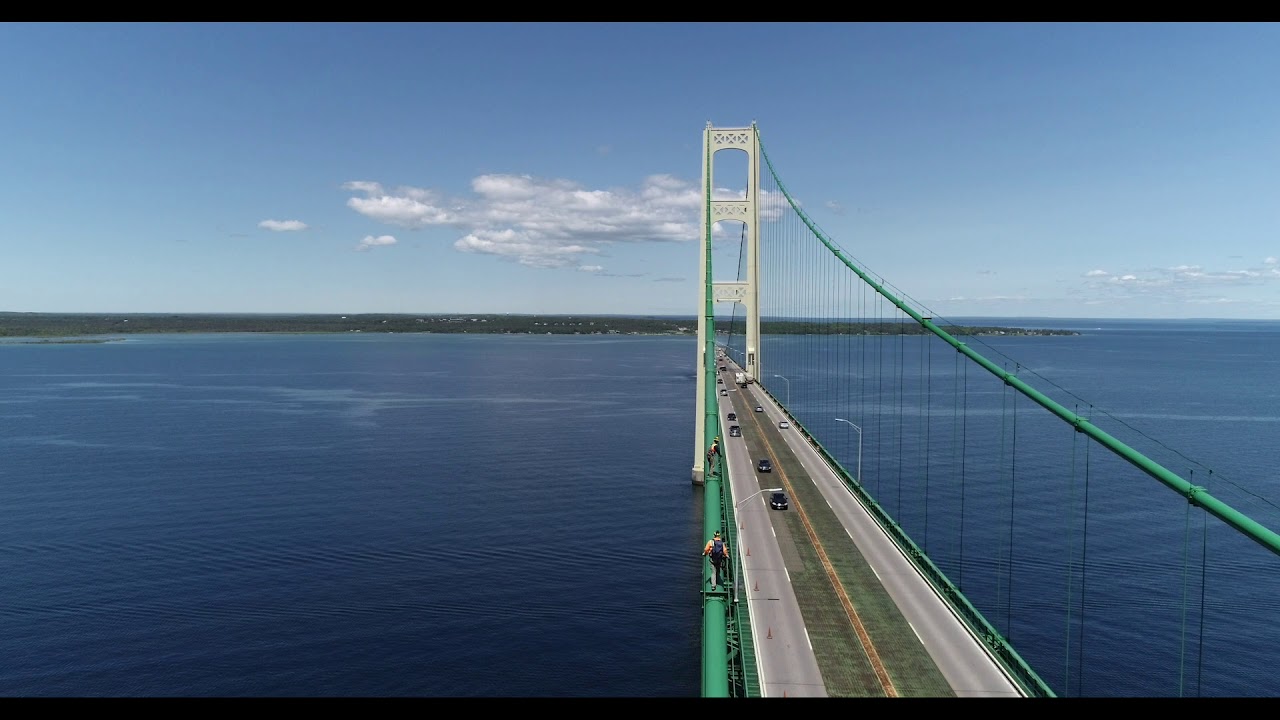 MDOT photographer Tim Burke recently assisted a Japanese production company shooting a documentary about one of the Mackinac Bridge Authority’s steeplejacks. Here is some of the footage shot using a drone.