I am a graduate student working under Dr. Claudio Mazzoleni in the Environmental Optics Laboratory (EOL) at Michigan Tech. Currently I am studying the absorption spectra of water vapor to determine the appropriate transition lines suitable for my experiment. Water vapor is a critical gas present in the atmosphere in variable amounts that absorbs in various wavelength regions from the far infrared to the UV region. This results in hundreds of band spectra and thousands of transition lines. I am using the HITRAN database to simulate and select the optimal lines for my study using a Tunable Diode Laser. I am working to develop an instrument that can monitor the water vapor concentration in the Cloud chamber soon to be installed at Michigan Tech. Before stepping into this experiment, I studied the absorption band of CO2 using a tunable diode laser.

I have also been working on the development of a Quartz-Enhanced Photoacoustic Spectroscopy system. A piezo-electric quartz tuning fork has been successfully utilized in photoacoustic spectroscopy in a gas filled resonator for the study of light absorption by gases. Our group is determined to extend this technique to measure aerosol absorption in real world situations. 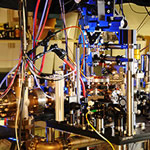 Physics alum Nathan Hinkley ’09 is the first author in a Science Express publication entitled “An Atomic Clock with 10-18 Instability”. The paper was picked up by several news outlets, including Scientific Computing, LA Times Science Now, Photonics.com, and National Public Radio.

Petra Huentemeyer (Physics) has been awarded a $156,750 research grant, the first year of a potential three-year $470,250 project, for “Studying Cosmic-Ray Acceleration and Propagation, Gas Content and Interstellar Radiation Fields in our Galaxy with the HAWC Observatory” from the National Science Foundation.

Mutli-scale modeling of nanoparticle based transistors

For half a century the integrated circuits (ICs) that make up the heart of electronic devices have been steadily improving by shrinking at an exponential rate. However, as the current crop of ICs get smaller and the insulating layers involved become thinner, electrons leak through due to quantum mechanical tunneling. This is one of several issues which will bring an end to the party, after which future improvements will have to come from employing fundamentally different transistor architecture rather than fine tuning and miniaturizing the field effect transistors in use today.

Several new transistor designs, some designed and built here at Tech, involve electrons tunneling their way through arrays of nanoparticles. We use a multi-scale approach to model these devices and study their behavior. For the smallest details of how often electrons jump from one particular nanoparticle to another, we use a first principles approach (density functional theory) to study the quantum mechanics involved. To estimate the change in energy due to the movement of a single electron, we use the finite element method to calculate electrostatic capacitances. The kinetic Monte Carlo method allows us to use our knowledge of these details to simulate an entire device — sometimes consisting of hundreds of individual particles — and watch as a device ‘turns on’ and starts conducting an electric current. Finally, we are developing new algorithms that will allow us to simulate the collective behavior of thousands of devices.

This work is ongoing under the advisement of Dr. John Jaszczak, in collaboration with the research groups of Dr. Pandey, Dr. Bergstrom, and Dr. Yap, and with support from the Miles fellowship.

PI Claudio Mazzoleni and Co-PI Kendra Wright (Physics) have been awarded a $30,000 grant/student fellowship from the National Aeronautics and Space Administration for “Radiative Properties of Free Tropospheric Aerosols in the North Atlantic at the Pico Mountain Observatory.”

The Friedmann equations can only be balanced when negative energies are coupled to a greater magnitude of positive energy or positive curvature, and minimal cases of both of these are reviewed. The future and fate of such universes in terms of curvature, temperature, acceleration, and energy density are reviewed including endings categorized as a Big Crunch, Big Void, or Big Rip and further qualified as “Warped”, “Curved”, or “Flat”, “Hot” versus “Cold”, “Accelerating” versus “Decelerating” versus “Coasting”. A universe that ends by contracting to zero energy density is termed a Big Poof. Which contracting universes “bounce” in expansion and which expanding universes “turnover” and contract are also reviewed.

I am working with Dr. Petra Huentemeyer on the HAWC (short for High Altitude Water Cherenkov) experiment, a very high energy (VHE) gamma-ray observatory currently being built in Mexico. In contrast to optical or radio waves, gamma-ray photons cannot penetrate the Earth’s atmosphere. Instead they collide with particles in the atmosphere and create showers of secondary particles through electromagnetic and hadronic interactions. Once completed the HAWC experiment will consist of 300 water Cherenkov detectors (WCDs), that will measure these secondary particles as they sweep through the array. The directions of the primary gamma-ray photons are reconstructed using the time between the signals in each WCD. Thus timing calibration, which is what I am currently working on, is crucial for good angular resolution. As of now, more than one third of the array is finished and operational. At the moment, I am doing a preliminary analysis of data collected with this sub-array. Figure 1 shows a picture of HAWC on July 26, 2013. My research is focusing on pulsar wind nebulae (PWNe), the largest class of galactic VHE gamma-ray sources. PWNe produce electromagnetic radiation in a very broad energy range from radio to VHE gamma rays, and thereby provide an excellent laboratory to study the physical processes at very high energy. Figure 2 shows the crab nebula at different wavelengths. Using data collected with the complete HAWC array, I will reconstruct the energy spectrum of gamma rays emitted by PWNe. I will combine my analysis results with data from other experiments that take measurements at lower energies, to reveal the physics processes occurring in PWNe.

Recipients of Summer Undergraduate Research Fellowships (SURFs) will present end-of-summer project updates Monday and Tuesday (Aug. 12 and 13), from 9 to 11 a.m., in Fisher 139.

SURF award recipients in physics include:

Joseph Charnawskas
Advisor: Raymond Shaw
The Effects of the Gravitational Force on Water Particles in a Turbulent Flow