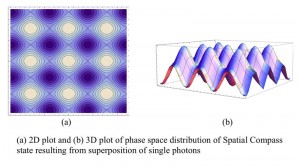 Quantum Information Science (QIS) is an up-and-coming field that exploits the peculiar properties of quantum superposition and entanglement by using quantum objects, such as atoms, molecules, photons and phonons. As photons interact weakly with their environment and are very robust against environmental disturbance, they are considered the most promising candidates for the applications of QIS. The preservation of intrinsic quantum properties of light in macroscopic environments will be the key for practical realization of QIS. For my Ph.D. research, I’m working with different quantum light sources, spanning from single photon systems such as entangled photons to millions of photons such as weak coherent light. I study the intrinsic correlations of quantum light in macroscopic environments, while mainly concerned with their applications in quantum metrology and communications.