College of Sciences and Arts Newsblog 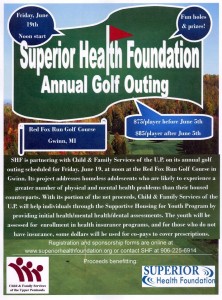 The College of Sciences and Arts is among those sponsoring lunch and prizes for the annual Superior Health Foundation (SHF) Golf Outing.

Registration and sponsorship forms are online at SHF.

Dean Bruce Seely of the College of Sciences and Arts has chosen to recognize David Olson, a senior lecturer in mathematical sciences as the final Dean’s Teaching Showcase member for spring 2015.

Dean Seely commented on this selection by saying, “Up to this point I have selected younger faculty whose ideas and approaches seem naturally to align with the national patterns of past practices in the class room. For the third selection, however, I am focusing on a person whose demonstration of sustained excellence in teaching and instruction should motivate everyone–David Olson. He has been a leader in teaching in a department noted for excellence. He has taken on the task of adding the necessary knowledge and the external certifications of the Society of Actuaries (SOA) that allow him to guide the department’s actuarial sciences concentration. He has helped advise majors and served on numerous curricular committees. But the most important reason for recognizing Olson is the length of time he has been so good.”

Olson’s initial reaction to Seely’s nomination was “Yikes, I’ve been here 20 years. How did that happen?” But his second reaction was more serious and significant, for it signals the reality of the challenge university faculty face in the classroom. “Teaching technology is progressing so rapidly that I’m hopelessly far behind,” he noted, before adding “If anyone is not hopelessly far behind, they’re not paying attention. I’m sometimes on the bleeding edge, like when Canvas came out, but mostly I look for items where the process just got simpler, like recording class for student-athletes. BIG change, and one that will make it much easier to put together videos.”

Seely sees this technology question as “an obvious conundrum for faculty today.” He and Olson agree that it’s not enough just to know “what the newest ideas and approaches are.” Instructors need to find out “…which ones make sense for the needs at Michigan Tech.” Seely emphasizes, “Novelty for its own sake almost never makes sense in such a dynamic environment. DavidO’s key understanding is that technology needs to facilitate student learning.”

In order to help with this process, Olson focuses on interaction. “My biggest trick is that I listen to students, face-to-face. How is the class going? Concerns? Are there any issues that aren’t clear? What’s really helping you learn? Do you have a good study group? How’s life? What’s your favorite movie? Every now and then a student tells me that some random classroom activity really helped, and so I’ll do more of it, and ask other students whether it’s helping them.” Moreover, Olson notes the vital necessity of talking to other faculty members as well to find out what they are trying, what’s working, and what’s not.

The point is that Olson is never satisfied. “In that last desperate 15 minutes before class, I’m usually asking myself the following questions: ‘What am I trying to accomplish? What activities might work?’ Experiment. Tweak, tweak, tweak.”

The final gauge of this desire to always seek better outcomes can be found in Olson’s last comment. “I have dreams of a revolution, a new STEM sequence that takes advantage of what’s now possible with multimedia and the internet: Scientific Modeling with Calculus and Computers.” Seely indicates that this goal matches nicely with some ideas circulating within the department, so he fully expects to see such a class take shape in the near future. Seely emphasizes, “But at root, this initiative will grow from Olson’s constant drive to do things better to help students learn.”

Olson will be formally recognized with the 11 other Dean’s Teaching Showcase nominees at a luncheon during 14th week. Please join Dean Seely and the Jackson Center for Teaching and Learning in thanking Olson for his outstanding contributions to the teaching mission of the College of Sciences and Arts.

Bruce Seely, Dean of the College of Sciences and Arts, provided significant context for this week’s Dean’s Teaching Showcase nominee, Andrew Galerneau. Andrew, a lecturer in the chemistry department, is primarily responsible for teaching Organic Chemistry, which, according to Seely is “one of the more dreaded foundational courses for majors and non-majors.” Seely knows that student evaluations are generally lower in classes that are “large, required and foundational”, and Organic Chemistry is all three of these.

But according to Seely, Andrew “sees this situation as a challenge, not a limiting factor.” By making use of research-based active learning strategies and motivational techniques like gamification, Andrew helps students “really learn the material”. At the same time, Andrew’s enthusiasm and excitement helps him “bring students – even those who are initially reluctant – to see material as interesting and important.” Andrew’s passionate commitment to helping students learn keeps the course positive in this challenging environment.

Andrew demonstrates this passion as he describes his teaching methods. Speaking about his technique of having students answer three open-ended pre-lecture questions before each lecture, he says: “ I personally grade at least of third of these questions prior to lecture and deliver direct feedback on my student’s assignments. I want them to know that I am reading what they write and that I am actively interested in how they are learning the material.” He also provides small incentives for discussion board participation and uses an “achievement system” to recognize students using anonymous monikers and Canvas announcements for perfect performance in certain elements of the class. His goal is to “foster a community of students who are passionate to engage in peer-to-peer learning.”

Seely sees Galerneau as the latest committed faculty member to bless the chemistry department, placing him on a list with people like Fredrick Williams (for whom the instructional innovation award was named) and Paul Charlesworth (an instructional innovation award winner who has extensively developed content and methods in the introductory chemistry course.) Seely feels “very lucky to have people who possess such passion and excitement about, and dedication to, teaching.”

Andrew will be formally recognized with the 11 other Dean’s Teaching Showcase nominees at a luncheon near the end of spring term. Please join Dean Seely and the Jackson Center for Teaching and Learning in thanking Andrew for his outstanding contributions to the teaching mission of the College of Sciences and Arts.

The Dean’s Teaching Showcase nominee for this week comes from the College of Sciences and Arts. Dean Bruce Seely has chosen to recognize Scott Kuhl, an assistant professor in the Department of Computer Science with an adjunct appointment in Cognitive and Learning Sciences. Dean Seely values “what Scott Kuhl attempts to accomplish as a teacher mainly for the mindset he employs, and less for the specific teaching techniques has adopted.” He notes that Scott “does not differentiate between regular classes, summer youth and support for Enterprise activities as educational venues—but approaches all with the goal of creating a fun and motivating environment.”

In his more traditional courses, Scott does attribute his teaching success to specific techniques, like providing detailed assignment descriptions with numerous tips to “help get students going in the right direction.” He also provides numerous examples, some of which he walks through in class in detail, and encourages students to share additional examples with each other. Finally, he emphasizes prompt feedback for his students. He has accomplished this by creating an automatic grading program which provides a “provides a transparent, well-defined set of expectations for assignments” and a score that can be adjusted by an instructor or grader as necessary. He’s even willing to share this tool with those interested.

Kuhl is also focused on continual improvement. Though the Husky Game Development (HGD) Enterprise he leads is focused on games, he attributes its dramatic growth under his leadership to a careful cycle of feedback, change and evaluation. He sees the value of interdisciplinary teamwork, communication, development and management for students in HGD, and has led the group in both publishing academic papers and receiving sponsorship from both Chrysler and the Department of Labor.

Scott will be formally recognized with the 11 other Dean’s Teaching Showcase nominees at a luncheon near the end of spring term. Please join Dean Seely, computer science chair Min Song and the Jackson Center for Teaching and Learning in thanking Scott for his outstanding contributions to the teaching mission of the College of Sciences and Arts.

Ten Michigan Tech AFROTC Detachment 400 cadets in their second and third academic years competed in a national selection board to attend the annual summer field training encampment at Maxwell Air Force Base in Montgomery, Alabama. They competed against all other 144 AFROTC detachments in the nation for limited slots, and all ten cadets were selected—a rare honor for any AFROTC detachment.

Each will attend one of five four-week encampments throughout the coming summer. Their training will include leadership and followership skills, problem-solving, time management, decision-making under pressure, teamwork, marksmanship, physical fitness, drill and ceremony, military ethos and knowledge, confidence building, cultural competency, survival skills and operating in austere deployment environments.

These ten cadets have been preparing all spring semester in an intense training program led by AFROTC cadet trainers Nicholas Grygleski and Jacob Ahles. This is a significant milestone in AFROTC; attendance is required to proceed in the program and become a commissioned officer in the Air Force. The ten cadets will return next fall to become the new cadet leadership in the 400th Cadet Wing here at Michigan Tech AFROTC. The Det 400 cadre and staff are immensely proud and eager to see them in action when they return.