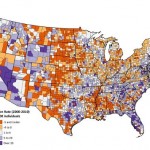 Migration Patterns Reveal Much about US Population, Research Finds

Richelle Winkler, assistant professor of social sciences, says Detroit attracted fewer young adults in the 1980s and 1990s than did revitalizing cities like Chicago. Then, with the economic recession between 2000 and 2010, more young people actually left Detroit than people of other ages.

“In this extreme situation, the young were more likely to move out,” she says, “because they are more mobile and not as tied to families and mortgages. This kind of shift in the signature [age-based pattern] is rare and indicative of real and profound socio-economic change.”

Winkler’s work is part of a new population-map website, Net Migration Patterns for US Counties housed at the Applied Population Laboratory at the University of Wisconsin–Madison.