The peculiar field of Industrial Archaeology presents excellent and fertile ground for interaction between the disciplines, but this unusual ground is unevenly exploited. Current developments in Industrial Heritage in the Keweenaw and around the globe point to ways that we can enhance collaborations. Scarlett will introduce some brief examples of how geological and mining engineers and scientists could fruitfully interact with archaeologists involved in the study of industrial heritage, discussions will ensue.

Students at Michigan Tech gathered outside for a ceremony on campus to honor the occasion. The founding document was signed on September 17, 1787 in Philadelphia, Pennsylvania. It is a federal requirement that all universities do something to mark the anniversary date.

“I think it gives students a really good reminder to think about the Constitution as the document that we all admire and has worked a long time for this country,” said Social Sciences Department Lecturer Susanna Peters. 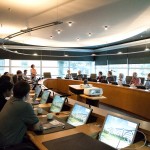 Don Lafreniere (SS/GLRC) co-hosted a scientific panel on Spatial Analysis in Historical Demography last week at the Université du Québec in Quebec City, Canada. Sponsored by the International Union for the Scientific Study of Population, the panel brought together researchers from around the world to discuss emerging scholarship in spatial demography and to strengthen dialogue between historical and contemporary demographers.

Fred Quivik will be presenting “Managing Underground Development from Afar: Anaconda’s Walker Mine in California, 1915-1941″ on Friday, September 25, 2015 at 3:00 p.m. in Room 610 of the Dow Building as part of the Geological and Mining Engineering and Sciences’ Geoseminar presentations.

Don Lafreniere (SS/GLRC) has received a $193,008 partnership development grant from the Social Science and Humanities Research Council of Canada for a project titled, “Canadian Historical Geographic Information Systems Partnership.” This is a two-year project. 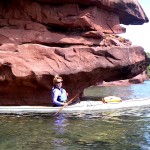 The second year of community seminars/discussions at the Carnegie Museum of the Keweenaw were announced this week by emeritus professors Bill Rose and Susan Martin. The initial discussion is September 15 and will be led by Nancy Langston (SS) and the GLRC: Sustaining Lake Superior. The museum’s doors will open at 6:30 p.m. for refreshments and introductions, and the lecture will begin at 7 p.m. The series will run through April 2016, with a guest speaker featured on the third Tuesday of each month.

Rose and Martin, Carnegie Museum board members, say they have lined up distinguished senior researchers from Michigan Tech to address topics of interest to teachers, students, residents and the larger community.

Melissa Baird (SS), published, “Heritage Ecologies and the Rhetoric of Nature” in The Rhetoric of Heritage (Kathyrn Lafrenze Samuels and Trinidad Rico—editors, University of Colorado Press).

On the weekend before orientation, the Industrial Archaeology Program (SS) made a graduate-study tour to Milwaukee. Five Social Sciences faculty and five graduate students (SS and HU, both MS and PhD) investigated industrial production, adaptation to industrial decline and how urban patterns have been affected by industry, both historically and today.

The five-day trip, partly underwritten by the Chipstone Foundation of Milwaukee, included factory process tours, museum visits, and a day at Chipstone discovering explanatory and interpretive strategies for material culture, primarily using the history of the ceramics industry as the focus for the day.

Visits included the Kohler Company, which produces ceramic and cast iron bathroom fittings; Caterpillar Global Mining (formerly Bucyrus-Erie), which builds some of the largest earth-moving machinery on the planet; Harley-Davidson Powertrain Operations, where we saw engines and transmissions being assembled on a state-of-the-art assembly line; La Lune designer rustic furniture company, where small-batch artisanal woodworking is still practiced; and the Falk Foundry (Rexnord Industries) in Milwaukee, which has sadly been decommissioned in the last six months, but which offered a glimpse of active deindustrialization.

Museum visits included the Hamilton Wood Type Museum in Two Rivers (WI), the Grohmann Museum at the Milwaukee School of Engineering, which has an extensive collection of artwork depicting industrial work, and the Iron Mountain (MI) Pumping Museum. The final stop of the whirlwind tour was the Wisconsin Historical Society’s Herrling Sawmill in Greenbush (WI), a reconstructed 1850s vertical sash sawmill. The historically accurate sawmill has been reconstructed on the basis of archaeology done by Michigan Tech’s Industrial Archaeology Program in the 1990s. Sadly, the day we visited the saw blade was misaligned and a main bolt had sheared, so it was not running, but it was wonderful to see the final result of our archaeology of 20 years ago.

The Carnegie Museum hosts tours of Huron Creek. Carol MacLennan (SS) and Alex Mayer (CEE) will host a pair of tours tonight. Begining at 5:30 p.m. and again at 7 p.m. the tour of Huron Creek travels from its rerouted home behind Walmart to its entry into the Portage Canal. You will learn about how area mines and other development changed the route and the ecology of Huron Creek. $25.00 per ticket ($20 members) includes guided tour and refreshments at Museum.

Seats are limited, reserve tickets by calling 482-7140 or email

Note — your seat is NOT GUARANTEED UNTIL PAID. The museum will be open at noon today. The Red Jacket Trolley is undergoing repairs this summer so they will use use a small tour bus instead.
Continue Reading →