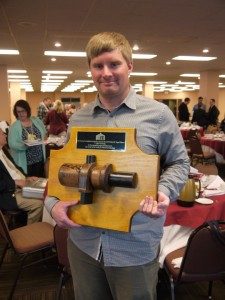 The West Point Foundry in Cold Spring, NY, the site of an intensive industrial heritage and archaeology (IHA) project by Michigan Tech faculty and grad students from 2002-2009, was designated an American Society of Mechanical Engineers (ASME) Historical Mechanical Engineering Landmark on Oct. 5.

One of the largest integrated iron foundries and machine shops in the first half of the 19th century, the West Point Foundry is also one of the most intact industrial archaeological sites of its type in America.

The Tech IHA investigations helped lead to the designation. Arron Kotlensky (M.S. IHA 2007) wrote the nomination on behalf of Scenic Hudson, the property owners, and he and Steven Walton (SS) were at the designation ceremony to lead tours for the president of ASME, local historical society board members, the press and the interested public.

The story received coverage in the Cold Spring media, Foundry Management and Technology and by the ASME.

Walton and Kotlensky also designed the brochure for the event.