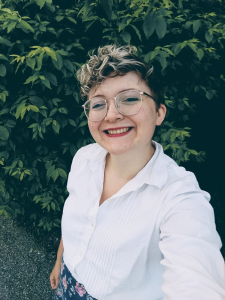 This is a guest post from Lena Stenvig, an undergraduate student at Michigan Tech. Lena is studying Computer Science and minoring in Environmental Studies. Lena took the photos included in this blog post. She can be reached at lsstenvi@mtu.edu 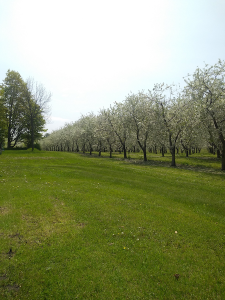 America is all about its family-owned farms. From its popular food chains serving America-grown burgers to its corn-mazes in the fall attracting people from all around, none of it would be possible without the original small-town humble farmers that do their job equally for supporting their families and for the love of what they do every day; but now our farmers need help. When people moved away from their family farms over to less body-intensive jobs for work, fewer farms began producing more product on more land. Even so, many farmers struggle to produce enough crop to sustain themselves and their family. Around 91 percent of farming families have at least one family member working at a job that is not the farm. This is where Behind the Meter, or BTM comes in.

Behind the meter is a means of producing your own energy so that you are not pulling all of the energy you use from the grid, and as a result pay less for your electricity bill. A popular technique to behind-the-meter is installing solar-panels in one’s yard on upon the roof. In this way a household can produce green energy to lower its carbon footprint and can save on the electricity bill. A typical household has room for a few solar panels. Enough to sustain itself for most of the summer months, but usually not enough when the winter heating bill kicks in. A modern American farm has much more land than your typical resident. Even if most of it is used for farming, there are certainly space that could easily be allocated for a small solar farm. Having worked for Garthe Farms LLC this summer, a cherry farm deep in cherry country near Traverse City, MI, I have seen first-hand where and how this can work. My uncle, Gene Garthe, runs this farm and in recent years invested in four large solar panels that sit in empty space near the driveway nearing the farm house. These four solar panels produce enough energy to run what electricity is needed for the farm, and that is all they desire and need.

Despite producing plenty of energy via solar, Garthe Farms is not a emissions-free facility. Large machinery is used to harvest the cherries from their trees. There are three machines that are necessary in cherry harvesting: the Shaker, which shakes the cherries from the trees, the Catch Frame, which catches the cherries shaken by the Shaker and conveyors them into a tub, and the tractor that takes the tubs when full to the loading dock and brings the Catch Frame a new tub in which to fill more cherries. All three of these machines require diesel fuel to run, and as much work as one can complete towards electric vehicles, it is not economically feasible at the moment to make a machine that chugs through an entire tank of fuel in eight hours of work to operate on an electrically-rechargeable battery. To make up for their fuel usage, perhaps it is better that farms simply produce a form of green energy that can make up for the amount of fossil fuels they consume. 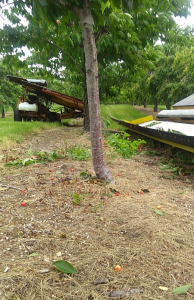 Cherry harvest in motion: The Shaker (far) moves to the next tree while the Catch Frame (near) is receiving a new tub in which to place the harvested cherries.

In this way farmers can reverse the BTM method. If they can produce their usual crop while also producing energy in either the form of solar or wind, they can sustain their household while also receiving return on what they put out to the grid. This can work if they can have some of their own personal solar panels to run what they need to on the farm, and then working with solar or wind companies to lease certain areas of their land to be utilized for said energy production. For wind, this is easy by simply taking up a small portion of land for each windmill. The minimally invasive turbines do not take up much room on the farm and do not hinder the crops from receiving enough sunlight. Solar panels can prove to be trickier. Because of their method of energy production, solar panels would not work well in a field full of crops that also require sunlight in order to grow. For farms that grow plants that take up less room per unit such as potatoes or corn, placing solar panels in spare spaces around the field while mostly utilizing wind power might be the best option. For farms like my uncle’s, it is a different story entirely.

Much of a cherry orchard’s area is taken up by plants and grasses that grow below the trees, and the trees stand spaced approximately ten feet apart within each row. Each row stands about another twenty five feet apart. Where some farms may be only able to place solar panels near roads or at the end of rows, orchards may place the panels in these locations are more. If one row of trees were to be replaced with solar panels, the loss of trees would be fairly minimal while also adding enormous potential for solar production. Even without removing trees, placing solar panels at the end of rows would not affect the production of fruit while also receiving gain on solar production.

If we are to look closer at our American farms and examine the issues they face today, and if we can only look at the potential they hold for energy production, we may not only be able to solve the growing problem of farms going bankrupt, but also for finding a place to produce greener energy without disrupting land that is not being used and additionally would ecologically be better off as it is. In this way farmers can continue to do what they love, and not have to work more than they have to in order to pay bills and keep their farm from dying. With this I might say the path onto greener pastures might just be creating greener pastures.