By
Steven Brisson, Chief Curator for Mackinac State Historic Parks, gave a public talk on Wednesday, April 14, 2010, as part of the Archival Speakers Series sponsored by the Michigan Tech Archives. His topic was D. Frederick Charlton, the first professional architect to reside permanently in the Upper Peninsula.
Over four-hundred buildings are credited to Charlton, including important public and private commissions and the buildings for four state institutions.  His office designed structures in a variety of popular styles of the last phase of Victorian architecture.  These included Romanesque, Queen Anne, Colonial Revival, and Classical Revival.  Three of Charlton’s most important works are the Marquette County Court House, the John M. Longyear House in Marquette (moved and rebuilt in Brookline, Massachusetts), and the Upper Peninsula State Hospital for the Insane at Newberry. Brisson’s research at the Michigan Tech Archives focused in particular on material from the Herman Gundlach Collection.

This research was supported by a Michigan Tech Archives Travel Grant, funded by the Friends of the Van Pelt Library. Since 1998, this program has helped scholars advance their research by supporting travel to the manuscript collections at the Archives. The program is intended to encourage research using the Archives’ lesser known collections or promote new methodological approaches to well-known collections. From a competitive field of applicants, the grant committee selected four scholars this year whose research typifies the spirit of the grant program. They join the ranks of twenty-two past recipients in this most recent round of awards.

The grant supports travel to the Archives with stipends of up to $750. Once a research proposal has been selected, the amount awarded is determined according to an applicant’s distance from Houghton, Michigan, and the degree of financial need. A full-time graduate student working to complete her or his dissertation is an example of the kind of applicant considered to have a high level of financial need. Although the majority of award recipients are associated with academic institutions either as students or facility, applicants need not come from an academic environment. The program recently supported a strong research program in ethnology by funding two genealogy practitioners exploring Calumet’s 19th and 20th century Polish community.

In addition to the research topic, the award committee considers a person’s track record for completing projects in a timely manner. A strong applicant will demonstrate an ability to publish their research, create a public web page, or otherwise make available the results of their work at the Michigan Tech Archives. The Archives houses a rich collection of historic resources  that we want people to know about. And we don’t want the distance someone might have to travel to the Upper Peninsula to discourage them from coming here. The travel grant helps us achieve both of those goals.

Four researchers were selected to receive a Michigan Tech Archives Travel Grant for the current year. This year’s recipients will investigate a diverse array of topics in the Archives’ manuscript collections. Research subjects include the practice of 19th and 20th century medicine in a remote industrial community; the relationship between representations of three-dimensional data and the flow of information within an organization; the regional work of Michigan architect D. Fred Charlton; and the politics and economics of community development during an era industrial decline.

For information about Brisson’s research, architect D. Frederick Charlton, or the Michigan Tech Archives and its collections, email us at copper@mtu.edu, call us at 906-487-2505, or visit us on the web at www.lib.mtu.edu/mtuarchives. 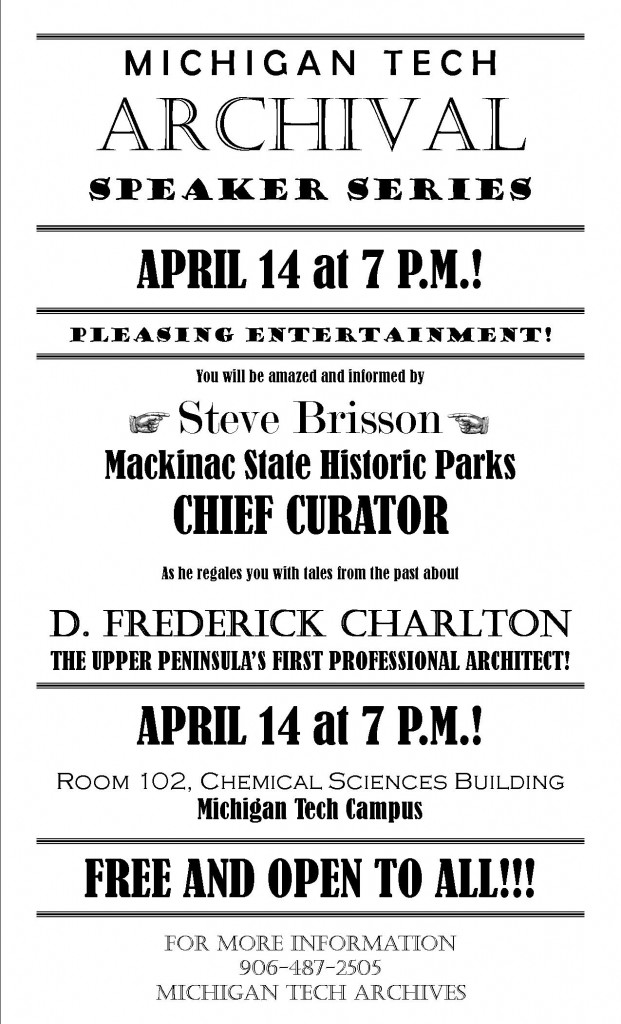