The Risks of Radicalism 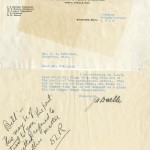 Unfortunately, the I. W. W. book was not included with the letter. The context for this letter (given below), derived from various sources in the Michigan Tech Archives, demonstrates the value of having an array of different sources at the same research facility.

We don’t know if Schacht took any action on this matter, but it is easy to see the potential risks of expressing radical opinions if your job could be threatened by the actions of your child.

This project is supported with a grant from the National Historical Publications & Records Commission.