Flashback Friday: Something About a Pasty 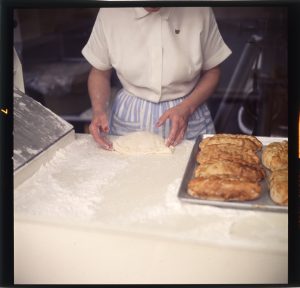 A good old Cornish song proclaims, “There’s something about a pasty that is fine, fine, fine!” We Yoopers and friends know the truth of those words. The delicious dish nourishes the body and warms the spirit with its blend of meat, potatoes, and rutabaga, all nestled inside a flaky crust.

How did a meal synonymous with Cornwall become a staple of the Upper Peninsula? Cornwall’s long history of copper and tin mining led the rest of Great Britain to remark wryly, “Wherever you find a hole in the ground, you’ll find a Cornishman at the bottom of it.” Life in the mines of England often meant low wages and back-breaking labor, but it also cultivated a skill and knowledge of the work that made the Cornish miners a gold standard. As Michigan’s copper mines were first being opened for industry, their founders looked to Cornwall for able laborers, and the people of Cornwall, whose mines were tapering off, looked to Michigan for a new hope. Twenty Cornishmen, according to one scholarly history of the pasty, were already at work in the Copper Country by 1844. With them came their favorite workday meal, which was subsequently adopted en masse by colleagues of all backgrounds.

One of many variations on the pasty recipe held at the Michigan Tech Archives. This one was provided by the ladies of the Calumet United Methodist Church.

We don’t know for certain who invented this tasty pocket of joy, which has seen considerable changes over the years, but we do understand why it was so appealing to the men who worked in the mines and the women who prepared their dinners each day. The pasty’s hearty fillings can be prepared in a large batch and energize a person for a day of hard work; the meal can be held in the hand and eaten without utensils; and it’s easy, relatively speaking, for a miner to reheat a pasty over his candle far underground. Nowadays, you’ll see pasties around the Copper Country lunch table, sold at community fundraisers, at picnics by the shores of Lake Superior, or on parade at Calumet’s Pasty Fest, held this Saturday, August 18.

While we can all agree that pasties are scrumptious, debate rages about other aspects of pasty culture. Do carrots belong in a pasty? Should the potatoes be cubed or sliced? Can a pasty mascot appropriately be named Toivo? Most importantly, how can a person justify gravy when everyone knows that real pasties are eaten with ketchup? Alfred Nicholls and his family show the joy of pasties at the Central Mine Reunion, undated.

One response to “Flashback Friday: Something About a Pasty”