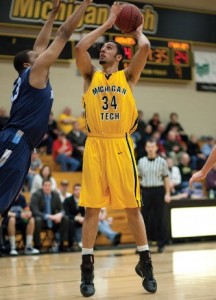 Haidar, a BSEE senior in the Department of Electrical and Computer Engineering, was named GLIAC Player of the Year for the second straight year and has broken four GLIAC records and seven school records this season. The Windsor, Ont., native broke the league record for points (541) and field goals made (188) in a season. He also established season records for free throws made (158) and attempted (209).