Fridays with Fuhrmann: Removing the barriers for women in electrical and computer engineering 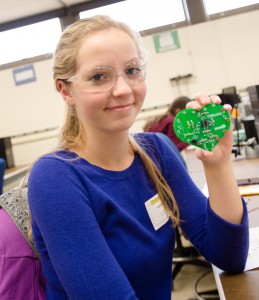 This week we learned that Michigan Tech, along with the University of Michigan and Michigan State University, has been selected for a grant from the National Center for Women and Information Technology (NCWIT) Pacesetters program, sponsored by the National Science Foundation (NSF), Google and Qualcomm. The aim is to develop aggressive goals and plans to increase the participation of women in computing and information technology. Michigan Tech is pleased to be recognized for its efforts to bring more women into the field. I congratulate Linda Ott from the Department of Computer Science on her leadership in bringing the grant proposal process to a successful conclusion.

This is a good opportunity for me to offer a few informal thoughts about the issue of women in electrical and computer engineering and what we can do, and need to be doing better, to bring more women into the field. This has been a conundrum for the ECE Department for a long time. We are not alone in that struggle; it is a nationwide issue. The female undergraduate enrollment in the ECE Department has hovered below 10% for many years, although there has been a very slow rise and this past fall we were at 10.8%, a minor victory of sorts I suppose. Many of us in electrical engineering are left wondering why this has to be the case. We can jump up and down and stand on our heads and say what a great field this is, and talk about all the career opportunities in EE (and I believe that with all my heart) but still that message doesn’t seem to be getting across, or at least isn’t making an impact. I will be the first to admit that I say all those things as a 58-year-old male who has had a reasonably successful and rewarding career, and that it is hard for me to see things from the perspective of a young woman about to graduate from high school.

You hear a lot of things about where the disconnect might be. It could be our culture, especially our youth culture, in which girls form opinions about themselves in middle school and high school about ability in math and science, which have little basis in truth but which they carry for the rest of their lives. It could be the professional environmental in high-tech areas like Silicon Valley, notorious for its “brogramming” culture in certain parts of the start-up world. It could be the lack of role models, in colleges and universities where electrical engineering and computer science is taught, and in industrial settings that come after. It could be that women look into the working world and just don’t see a path forward in an environment that is so dominated by men. All of these arguments have merit, and we need to be vigilant and aggressive in removing the barriers that are implied in each of them.

One often hears the argument that women are not attracted to electrical engineering because it is not a field that is “helping” or “nurturing”. I am going to go out on a limb here and say that this is complete hogwash and I reject it completely. First of all, saying that all women want to be caregivers is just buying into the stereotypes that have kept them out of the field in the first place. Second, and more importantly, the idea that electrical engineering is not a “helping” field is flat-out ridiculous. I would argue that electrical engineers have done more to help humankind in the 20th century than any other professional group you can name. What is more “helping” than bringing electrical power to every home and office in the United States? What is more “helping” than creating a communication network that allows people to connect via voice, text, or video, halfway around the world, at the touch of a button? What is more “helping” than designing the technology and the systems that provide for our common defense, protecting the nation and keeping us all safe in our homes? What is more “helping” than creating the technology that brings us the aesthetic joy and pleasure of music, video, and cinema? If someone wants to make an argument in support of the medical profession, I suppose we could sit down and have a good debate, but the first thing I would point out, as I did in this column three weeks ago, is that EEs were major players in that arena too!

Now that I got that off my chest, I’ll conclude by mentioning some of the things we are doing in the ECE Department at Michigan Tech to attract more women into our ranks. The ECE Department participates in Michigan Tech’s ADVANCE initiative, an NSF-supported program designed to the hiring and retention of women faculty, thereby creating a professional environment that our students can view as a model for the industrial world. We have wonderful and creative outreach programs for middle and high school age girls, in our summer camps and during the academic year; this is led enthusiastically by our Associate Chair Glen Archer, with help from a great group of students in the Blue Marble Security Enterprise. Dr. Archer was also the ECE point of contact for the successful NCWIT proposal. We have created an ECE Women’s Center in the EERC, a space on the 7th floor where our female students can meet for academic and social interactions. We have instituted two new concentrations within the BSEE degree, in Biomedical Applications and in Environmental Applications, that have a secondary but explicit aim of attracting more women to the field. I can’t say that we have found the magic bullet yet that is going to boost our female enrollment to 20% or 30% or more, but we are giving it our best shot.

This is an issue for which there are probably as many opinions as people who think about it. On this, and any other issue for that matter, I am always open to hearing from others and having a discussion. If you have read this far and want to take it further, please feel free to get in touch.