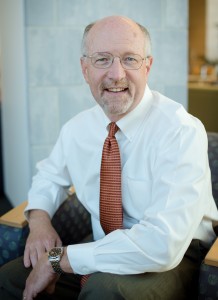 Today is the Friday before Spring Break at Michigan Tech. There are still a few classes today but for the most part things are pretty quiet as students slip out of town. This is a special day for me, as it was on the Friday before Spring Break in 2008 when I first set foot on the Michigan Tech campus, as part of the chair interview process.  I remember it was a cold windy day, with temperatures in the single digits.  Being new to the area, I just figured that was the norm here in early March.  It took me a while to learn that 5 degrees is cold even for Houghton!

Since we are at the halfway point in the semester, I thought I would write a few words about the half-semester course that I teach. It’s on my mind since I just submitted the final grades. This does not have a lot to do with major department or university issues; it’s just my pet project.

For the past four years, every semester I have taught a one-credit freshman course titled Essential Mathematics for Electrical Engineering. This grew out of another course that used to be taught here called Introduction to Signal Processing, which was the ECE Department’s response to a national movement in EE education called “DSP First”. The idea there was that electrical engineering students would be better served by first learning system concepts through the medium of digital signal processing (DSP), rather than by starting with electric circuits, which was considered somewhat old-fashioned and stodgy. We have since decided that that approach does not work very well for Michigan Tech students, for whatever reason, and that electric circuits isn’t such a bad place to start after all. It is concrete, it is practical, and it has limited scope which is important when one is breaking new ground.

That course in signal processing, which I did teach a couple of times, did have one really valuable component. The first month or so, roughly one credit’s worth, was spent on mathematical material that was critical not only for signal processing but many other EE subjects as well. A decision was made by the department to carve out this material, put it into a one-credit course, and make it a required prerequisite for everything that follows, starting with circuits. Essential Mathematics for Electrical Engineering was born.

The course covers material that seems to show up more in electrical engineering than in any of the other engineering disciplines. In a nutshell, the topics are sinusoids, exponentials, complex numbers, complex exponentials, phasors, and a little bit of calculus for complex exponentials and damped sinusoids. This is stuff that is critically important for circuits, linear systems, power systems, signal processing, control, and communication – in other words, the majority of the EE curriculum. Students may have seen some of the material scattered throughout their high school and college math courses, but I wanted to put it all together in a unified way. I have often seen throughout my career that EE instructors will assume that students know this material, but they cannot point to a course where they were supposed to have learned it. I set out to rectify that situation.

My approach to this course is “less is more.” I present a carefully prescribed set of topics, and I tell the students exactly what I expect them to learn. It’s not much, so I want them to really learn it and not just “be exposed” to it. The course is pass/fail, and the grade is based entirely on a closed-book one-hour exam with a pass threshold of 70%. I know that sounds a little intimidating, so I give them 3 chances to pass the exam. What I like to tell them is that the exam is like the “driver’s test” for electrical engineering – 3 chances to get 70%! In my experience so far, about 1/3 of the class passes on the first try (and are done early), another 1/3 passes on the second try, and most of the remainder pass it on the 3rd attempt. Historically the pass rate for the course is about 90%. It takes some students longer than others to figure out that I am serious, but eventually most get on board and do just fine.

One of the key elements of this course is Euler’s Formula, which ties together sinusoids, exponentials, and complex numbers in a beautiful way. [If you’re not familiar the formula is e^j theta = cos(theta) + jsin(theta).] I tell students that the whole course is about learning Euler’s Formula and understanding what it means. I go as far as telling them, if we run into each other at some watering hole in Houghton and they can recite Euler’s Formula from memory, I will buy them any beverage they are old enough to drink. This has actually happened – more than once!

I hope – and believe – that the course has had a positive effect on the students and our EE curriculum. I am not shy about asking students later if the course was useful, and the answer usually a definitive yes. It is not a major course, but it is an important stepping stone and I am happy with that

My challenge now is to find someone else to help me teach it, as I take on more administrative responsibility and start to wind down some of my teaching and research. This course has become my baby, and given my inclinations toward micro-management it is going to take a lot to turn it over to one of our other very capable ECE faculty members. I guess I’ll just have to swallow hard and think of it as a learning experience for me.