Fridays with Fuhrmann: The image of ECE 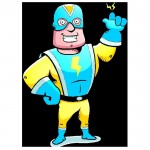 A couple of weeks ago I attended the annual meeting of the Electrical and Computer Engineering Department Heads Association, or ECEDHA, in San Diego. I enjoyed seeing old friends, making new ones, and having good discussions about a number of issues that we have in common and may not realize.

One of those issues is that of the ECE “image”, that is, how the general public, and specifically prospective students and their parents, views the field of electrical and computer engineering. There is a lot of angst and hand-wringing over the fact that we as a profession are not widely known or appreciated for what we have accomplished, and that in fact we are “losing ground” to other disciplines who are moving in on our turf.

This brings up a couple of thoughts for me. The first is, should we be worried about this at all? I think I will put that one off, and today I will offer a couple of observations on how I think we got to this point.

First of course is the “nerd” stereotype associated with electrical engineers, and engineers in general. This is promulgated in popular culture – think e.g. of the comic strip Dilbert, or Wollowitz in “The Big Bang Theory”, or many of the characters in “Revenge of the Nerds.” We all cringe at these stereotypes, although most of us in our heart of hearts will admit there is a kernel of truth in them; some even embrace them fully. Still, it is a constant battle to convince young people that one can be an engineer and still live a happy, healthy, productive, and well-adjusted life. I do what I can when given the opportunity.

A second issue is the “invisibility” part, that is, no one knows who we are and what we do. In this regard I think that as electrical engineers we have become a victim of our own success. We happen to work on systems that depend wholly or in part on the manipulation of electricity – voltage, current, electric fields, and the like – and it just turns out that of all the forces of nature in the universe, electricity is probably the most malleable. We can do things at unbelievable scales of both space and time. We can make electrical devices change their state a billion times a second, and can put a billion different such devices on a chip no bigger than a square centimeter. As a consequence, we can build systems that do unbelievable things, like a smart phone that connects to the Internet and downloads and displays videos from half a world away. The problem is, this technology is so successful that it is adopted quickly and commoditized. It is so useful and popular that people will just assume that it exists (or even claim that they have right to it) and they are unaware where it came from and the effort that it took to bring it to market. One can say this about electrical power to the home, telephone service, radio, TV, audio systems, medical instrumentation, computers – the list goes on and on. All this stuff just showed up in our lives in the space of two to three generations. But if you ask kids who invented the iPhone, guess what they will tell you, almost certainly: scientists.

It may be that part of the reason we as a profession are invisible is that the stuff we work with – electricity – is also invisible. The work of a mechanical engineer is obvious in the motion of an automobile, and the work of a civil engineer is obvious in the structure of a bridge. It’s there for all the world to see. However, people just have to take our word for it when we say we are pushing electrons around for the benefit of humanity. You can see the results of our work – that video downloaded to your phone, say – but everything that made that happen remains a mystery to most.

What to do about this situation? I suppose we have to address the first question I asked, namely, should we worry about it at all? Stay tuned; I’ll pick that up another day.