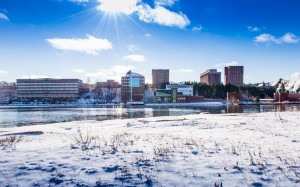 Greetings and Happy Spring everyone.  I am thrilled to bring you some exciting news from the world of high tech.

First off, Google has announced that as part of its effort to develop an autonomous, or self-driving, car, they have been secretly developing the technology that will make it self-powered as well.  Specifically, they have invented a closed-loop wind power system in which the motion of the car turns a roof-mounted windmill that powers both the electric motors and the on-board computers, which require roughly equal power.  At highway speeds the energy conversion is so efficient that the generators create more energy than is needed to propel the car.  The energy is stored in large batteries, and can be sold back to local utilities at “unfilling stations” which Google also plans to deploy at street corners across America, in a cooperative venture with Starbucks.  The new vehicle, called the Blowhard, is expected to eliminate American dependence on fossil fuel for transportation. A second team of civil engineers has been assembled by the tech giant to consider the retrofitting of highway overpasses to accommodate the new design.

Second, Apple and Facebook are teaming up and plan to use their considerable economical and political clout to lobby for a repeal Shannon’s celebrated Channel Capacity Theorem.  At a joint press conference, Apple CEO Tim Cook and Facebook CEO Mark Zuckerberg decried the excessive regulatory burden of this antiquated 68-year-old result.  Said Zuckerburg, “We need relief now from the political correctness of Shannonism and everything it is doing to hinder the awesome power of innovation and entrepreneurship across the U.S.  We now have devices that can access all of human knowledge, but because of a bunch of eggheads who don’t understand the real needs of our industry, all that people can do is use the technology to insult strangers and look at videos of cats.”  Cook concurred.  “We need some fresh thinking in Washington to unlock the true potential of the Internet, to give all Americans something for nothing.  I hope everyone has that in mind as they evaluate the candidates for national office in the upcoming elections.”

Finally, in a surprise move reversing an earlier decision, the National Academy of Engineering has named the automated voice answering system as the #1 technical achievement of the 20th century.
.
.
APRIL FOOLS!!!