Fridays with Fuhrmann: Spring into Summer 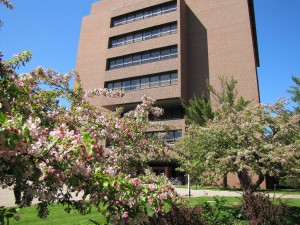 It is a fabulously beautiful day in the Keweenaw, and I am taking the day off to get some things done around the house, and to get ready to spend the weekend with some good friends at a cabin on Lake Superior, about an hour north of town.

Back around the time of Winter Carnival, I took a break from writing about engineering and education, and focused instead on snow and winter recreation in the Copper Country. Later on this summer I will do the same for all the summertime recreational opportunities, which are also abundant.

Today I just want to say that I am very much looking forward to the summer, which is starting about now. We don’t get much in the way of spring in Houghton. In April and early May there is an “in-between” time when the snow is melted but the days are still cold, often gray, and there is no green in the trees and grass. The town itself looks a little worn out from the long winter, and the streets are kind of dirty and dusty from all the stamp sand that was put down when there was snow. Then, all of a sudden – boom! – the weather warms up, the trees leaf out, the lawns turn green, the city cleans up the streets, and it is summertime.

Summertime also means long days in Houghton. They are made even longer, apparently, by a quirk in the time zones. Most of the Upper Peninsula, including Houghton County, is in the Eastern time zone. This is despite the fact that, if you draw a line straight north from Chicago, which is in the Central time zone, we are just to the west of that line. We are about as far west in the Eastern time zone as one can get. The “urban legend” is that this was done to keep the copper mines on the same time zone as the businesses in Boston that owned them. One implication for us is that, as we near the summer solstice in June, the sun goes down at around 9:50 p.m. and it stays light until 10:30 or 11:00. Even though we are not nearly as far north as, say, Alaska, in the middle of the summer one can still see a faint glow at night on the northern horizon that never gets completely dark.

Things are pretty quiet around campus. This is a time when a lot of faculty take vacation, go to conferences, or visit professional colleagues. We do teach summer classes in the ECE Department, but those classes tend to have a more relaxed and informal feel compared to the academic year. After Memorial Day things will pick up, as more people return to campus, taking advantage of the time to get some work done, make some progress on research projects, and maybe develop some new ideas and new directions.

One of the items on my “to-do” list for this summer is to develop a good strategic plan for the ECE Department, which the faculty can work on when we all get together again in August. I will let you know how that goes. Actually, the first item on the to-do list is to figure out how to do a better job managing the to-do list. But, I say that every year about this time.
Hope springs eternal.

Enjoy the summer everyone!