Fridays with Fuhrmann: Rants from the Grammar Maven 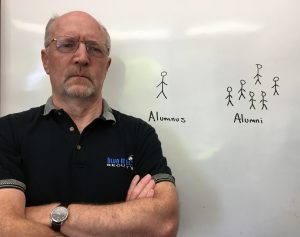 I am taking a break this week from recent discussions of relatively important topics like why we do what we do in academics, so that I can vent about one of my pet peeves. In the big scheme of things, today’s topic is totally unimportant, but sometimes things like this occupy more of our attention than they rightfully should so it’s good just to put it out there. I am referring to a particular issue of grammar that comes up quite often in academic circles.

I am amazed by the number of people who are willfully unfamiliar with the correct use of the word alumni. I am talking about people who should know better: students, faculty, our local daily newspaper, and yes, sometimes, professionals at Michigan Tech who work in communications, development, and alumni relations.

The word alumnus is a noun that comes from Latin, and like all Latin nouns it has what is known as a declension, that is, it has various forms depending on number and gender. This is sort of like conjugation, except that conjugation is applied to verbs, with various forms that depend on who, when, and whether or not the action is hypothetical.

Here is the correct (nominative) declension for the noun alumnus:

We have all heard or read it: an individual person is described as “an alumni” of some institution. For me this is like fingernails on the chalkboard. I must have said this a hundred times, and I guess I will keep saying it as long as I see the error being made, which is probably forever: ALUMNI IS PLURAL. ALUMNUS IS SINGULAR.

[Aside 1: The full declension for a noun includes a lot of other variations, like whether the noun is a subject, an object, or turned into a modifier. Most of those variations apply to the original Latin, not the way the derived word is used in English. In the above I am sticking just to the nominative case; I don’t want to get too far distracted here.]

[Aside 2: Have you ever actually scraped your fingernails on a chalkboard? I did it once, in junior high, and it is really awful. Now go back to what you were doing and try not to think about it.]

I recognize full well that there are two schools of thought regarding grammar. There is the constructivist school, which posits that grammar should follow carefully prescribed rules of usage that are written in stone forever, and the pragmatist school, which says that languages are alive and evolving, and that grammar is whatever the users say it is. I am kind of in the middle; I can tolerate some changes to the language if they make sense, like split infinitives. On the issue of alumni, however, I am a strict constructivist: anything other than the use of the word as given in the table above is flat-out wrong, I don’t care who you are or how many times you have used it incorrectly. Repeating a lie a hundred times does not make it true.

Some people skirt the issue of gender by using the more informal term alum. I think of this as a kind of slang used by people in development, and that’s fine. I am pretty certain that the term is singular and that the correct plural is alums. I have sometimes heard people use alum in the plural, like deer or moose, but every time I do, I find it jarring and think that it has to be wrong. Since we are talking about slang, I doubt if there are any strict rules.

Another one of those things that will never, ever be right is “for you and I” or any other use of the subject pronoun I instead of the object pronoun me in a prepositional clause. Somewhere along the line, people began to think that I sounds more sophisticated and correct than me, in all uses, and this error crept into the language. Again, we hear it all the time.

Here is another common error, still wrong but leading more to raising of eyebrows rather than gnashing of teeth. I often see the word itinerary when people are putting together a schedule for visitors on campus. An itinerary is a schedule for travel, like airline flights and hotels. It comes from Latin roots meaning a journey or a road. A schedule for activity in one place is simply that, a schedule. A schedule for a meeting is an agenda, although that word can have other more subtle meanings depending on the context.

Having gotten all that off my chest, I will close with a couple of items that are more matters of legitimate debate. The first is the pronunciation of the word alumnae, which comes up fairly often at Michigan Tech since we have an organization called the Presidential Council of Alumnae. There are two accepted pronunciations, alum-NEE and alum-NAY. There is not really a whole lot to debate here; it is more of an “agree to disagree” situation between the advocates of the respective positions. I am good either way.

My last item has to do with what we call someone who has served with distinction on the faculty, has moved on to retirement, is recognized by the institution, and happens to be a woman – is that person a Professor Emeritus, or Professor Emerita? The strict constructivists would say that Emeritus is correct since the choice has to do with grammatical gender, not biological sex, and since Professor is a masculine noun (in Latin) it should take the corresponding masculine modifier. The pragmatist can legitimately say yes, but how did Professor become masculine in the first place? When our very own Martha Sloan retired a few years, we came down on the pragmatist side and are proud to call her the very first (and only, so far) Professor Emerita in the ECE Department. I’m good with that one too.

One Comment on "Fridays with Fuhrmann: Rants from the Grammar Maven"