Fridays with Fuhrmann: A Visit with Martin Ford 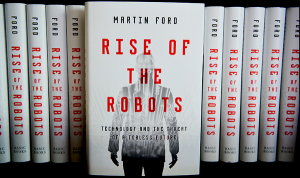 Last weekend Michigan Tech was privileged to host Silicon Valley entrepreneur and writer Martin Ford, author of the NY Times bestseller Rise of the Robots, which is all about the disruptive changes in the recent past and future in the areas of robotics, control, and automation, and the implications for our society and our economy. I was able to join Mr. Ford for a couple of different question-and-answer sessions with interested faculty, and to attend his presentation at the Rozsa Center which was open to the general public. I found the entire day to be stimulating and compelling, and I was very happy about the fact that Career Services and the Rozsa Center were able to work together and pull this off. The evening presentation was very well attended and included a lot of students. I was impressed that so many people were willing to give up their Saturday to hear a PowerPoint presentation about automation – but it really was that good.

Ford’s basic premise was twofold. First, although there have always been concerns raised about changes in employment and the economy due to technological advances, going all the way back to the Luddite movement in 1811, this time things are different due to the nature of the technological advances themselves, primarily in the area of artificial intelligence and deep learning. Second, there has been a marked shift in the relationship between worker productivity and worker compensation, that has led to increased inequality and that will probably continue into the foreseeable future.

The argument that “this time it’s different” centers around the sudden relevance of artificial intelligence and machine learning in engineered systems. Artificial intelligence has been around a long time, and for most of that time I have thought of it as the technology of the future – always has been, always will be. Now, in the past 5-10 years or so, it is becoming the technology of the present. This is due to a couple of factors. One is, the raw computing horsepower needed to carry out artificial intelligence calculations is starting to become a reality, due to the inexorable march of Moore’s Law (which says that, essentially, computing power per unit area on integrated circuits doubles every 1.5 to 2 years.) The second is the algorithms themselves, which have been steadily improving in academic research labs for many years, and which are now getting a turbo boost of innovation in industrial research labs like those of Google and Facebook, who recognize the importance to their bottom line. As evidence that we have turned a corner in artificial intelligence, Ford and many others love to point to the IBM Watson 2011 victory in an exhibition match of the TV game show “Jeopardy” over two human champions Ken Jennings and Brad Rutter. More recently, a program called AlphaGo was developed by Google DeepMind in London to play the enormously complex game of Go, and in May of this year it defeated the No. 1 player in the world in a 3-game match in Wuzhen. What is particularly interesting about AlphaGo is that it is not based on a set of rules or heuristics, but rather it simply (perhaps not so simply) trained itself to play the game through a process of trial and error using the techniques of machine learning. This whole field of “deep learning”, based on artificial neural networks made bigger and better as a result of Moore’s Law, is taking Silicon Valley by storm and has really transformed the economic focus there from electronics to software.

[Aside: I have always maintained that the IBM Watson Jeopardy match was not a fair fight. To make it fair, the entire computing platform and its database would have to fit into a box no bigger than 1500 cubic centimeters, consume no more than 20W of power, and be silent when others are speaking. Watson was a very large computer consisting of multiple servers in a separate room with a very loud air conditioning system, and it had access to huge databases of information. Human players are not allowed to “phone a friend” during the match. The counterargument, I suppose, is that the human players had the advantage of 30+ years of training.]

The starting point for Ford’s argument on the economic disruption of automation is in the relationship between worker productivity and worker compensation. In what is considered by the many the “golden age” of American manufacturing, post-WWII, advances in tools and technology allowed workers to become more and more productive, according to a metric of goods and services produced per unit time. As a result, workers became more and more valuable and thus wages went up in lock-step with productivity. Sometime in the mid-1970s, however, this coupling was broken. Worker productivity continued to go up and up, but wages became flat. Ford often made the statement that, adjusted for inflation, American workers have not received a raise in 40 years. He attributes this to a shift from a situation where tools helped human workers be more productive, to a situation in which tools can simply replace the human workers. The situation continues to this day, and the outlook is for it to continue even more rapidly, leading to greater levels of income and wealth inequality and hence social disruption.

Asked whether he was an optimist or a pessimist, Ford responded that he was a pessimist in the short term, based on the realities on the ground, but that he is still an optimist in the long term when he thinks about human resilience and ingenuity. There are some serious problems we are going to have to come to grips with, but if we can work together to recognize and solve those problems, and maybe even get out in front of them, then there is still hope. He is realistic, but not all doom and gloom. I did find his approach different, and more down to earth, from that of other futurist authors I have read lately, some of whom are wildly optimistic about the future of the human race and its relationship to the machines we are creating.

I found myself nodding in agreement with most of the Ford’s points, and had my own takeaway messages. The first is, and I realize this may sound a bit selfish, this is a fantastic time to be an electrical or computer engineer or computer scientist, about to be entering those fields. The technologies of robotics, control, and automation are advancing rapidly, and the advances are not about to stop. We are the ones who are creating this technology, and thus we are the ones who are going to be in demand in the next few decades. Ford himself, knowing that he was at a technological university, made a couple of offhand remarks to the effect that “you guys are going to be OK for a while.” Those who are losing out socially and economically could say that we are part of the problem, and they may very well have a point, although I think as well-educated problem solvers there is every reason to think we can be part of the solution as well. But, setting that aside for a moment, from the individual point of view I would have to say that I cannot imagine a better career to be considering right now than something in the intersection of EE, CpE, and CS.

As evidence of that I would point to our very own Career Fair, which was held this week. Over 340 companies were on campus recruiting Michigan Tech students for co-ops, internships, and full-time. My friends over in Career Services tell me that everybody – everybody – is looking for more electrical engineers and computer engineers. We cannot fill the demand right now of all the companies looking to hire our students. This story is reflected also in national starting salary data. According to the Spring 2017 report of the National Association of Colleges and Employers (NACE) which covers hiring of the Class of 2016, the top starting salaries by major in the nation, for groups with sample sizes of 500 or more, were:

These salary numbers are echoed locally. According to our Career Services 2016 Annual Report, Michigan Tech electrical and computer engineers (which were lumped together) had a 99% placement rate and an average starting salary of $65,951, which was highest among majors in the College of Engineering. ECE was second only to Computer Science, which did very well with an average starting salary of $78,333. The ECE figure is lower than the national average, but it is worth pointing out that many of our graduates take positions in the upper Midwest which has a lower cost of living than California. Our starting salaries are very close to what is reported in the NACE survey for the Great Lakes Region: EE $65,815 and CpE $67,610. Our Career Services numbers are self-reported and must be taken with a grain of salt; nevertheless there is no question in my mind that our graduates are doing very well. I never hear complaints otherwise.

A second point I want to make that was sparked by Martin Ford’s presentation, although tangential to his primary message, has to do with the ascendancy of the overall field of computing relative to engineering. He said it right out of the gate, that all the action in Silicon Valley right now is in artificial intelligence and deep learning. Silicon Valley got its name and its reputation from the design and manufacture of integrated circuits, but that is now taking a back seat to software engineering. The four U.S. corporations with the largest market cap right now are Apple ($791B), Google/Alphabet ($662B), Facebook ($490B) and Amazon ($459B). Apple still manufactures products, and Amazon manages a massive product distribution system, but even so the backbone and the core competency of these companies is essentially software. There are areas where software engineering intersects traditional engineering, to be sure, and the most visible example of that right now is in autonomous vehicles. The reason that Google can get into this game in the first place is that they do not have to design the power train. The value added by taking a traditional vehicle and making it autonomous comes from a suite of sensors, a trunk full of computing hardware, and all the cognitive data processing and artificial intelligence algorithms that end up controlling the accelerator, the brakes, and the steering. I predict that over the next 10-20 years we are going to see a lot more of these systems where the technological advances are primarily on the computational side, not on the physical side. I also believe that we need to be doing more to prepare our engineering students for a world that will be dominated by computing and software, and I will have much more to say about that in future columns.

Clearly my two take-away messages above were not really what Martin Ford came to talk to us about. In the end he advocated for a couple of things. One was more education in the social and economic impact of robotics and automation, which is certainly something I support and which would make all the sense in the world as part of our general education program. The second was starting a conversation around the idea of a guaranteed universal income. I think he is an proponent for this idea, but he recognizes the enormous political challenges and was content on this trip just to get people to start thinking about it. So, I am starting to think about it. I’m not ready to jump up and down arguing on either side, but am willing to learn more and have the conversation.

Fall is coming slowly to the Keweenaw this year. It’s been a wet summer and fall, so the colors should be pretty good as long as we can get a good cold snap to bring them out. Not seeing that in the forecast yet. Have a great weekend everyone!