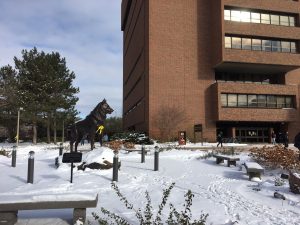 A couple of weeks ago I reported with barely contained glee that winter was on its way. I was right. We got a few inches of additional snow this past week, and for the time being it is sticking around. Thursday night temperatures plunged into the single digits in the western part of the Upper Peninsula. The cross-country ski trails at Michigan Tech are open, and I plan to be out there on Saturday. It’s a good time to make sure I have all the right gear, or at least remember where I put it at the end of the season last year. It’s nice to have the ski season start a little early for a change.

Saturday is also Veterans Day, and so in what has become a bit of a tradition I would like to recognize those members of the ECE Department who have served in the U.S. Armed Forces:

I thank these gentlemen for their service to the Nation. I also want to acknowledge these individuals for their service to the ECE Department in their current civilian careers. I try not to do this too much, but on those occasions when I need to ask people to put the interests of Michigan Tech and the ECE Department above their own personal interests, they have always answered the call, and I am deeply grateful. They serve as an example for all of us.

We are in the middle of preregistration for the Spring 2018 semester, and because we are in the second year of an increase in the number of new ECE students, we are seeing particularly large enrollments in key sophomore courses like Digital Logic and Circuits II. Right now Associate Chair Glen Archer and I are working to make sure that we put the right instructors in these courses, and even though we still have a couple of question marks I am confident that these courses will be expertly taught. I have always been a big believer in putting our best instructors in these critical early courses, where pedagogy matters as much as the material.

I have to believe that the increase in enrollment is due in part to increased awareness of the demand for computing professionals, exemplified by the data I showed last week. Judy Donahue, our academic advisor for the BSEE program, tells me she has been processing an unusually large number of requests for transfers into the ECE Department. I’m not really surprised, but we will have to make sure we are prepared to offer our new students everything they are looking for. Coincidentally, just as I was preparing to write this, I got wind of a recent report from the National Academy of Science about the growth in Computer Science enrollment and what universities all across the country are doing in response. I am looking forward to reading that and sharing some of it here. The topic fits squarely within the interests of our Computing and Information Sciences Working Group, which has started its own study of how computing is approached, as a broad academic and research area, at 40 U.S. universities.

November 10 is the anniversary of the sinking of the Edmund Fitzgerald, in 1975. I’m not sure what that has to do with anything else in today’s column, but I suppose I can use it as an opportunity to remind everyone to be careful while traveling, especially a week from now when people take off for Thanksgiving. I don’t know anyone going out on Lake Superior, but the roads can be a little dicey this time of year with fresh snow. Take it easy and don’t get in a hurry!