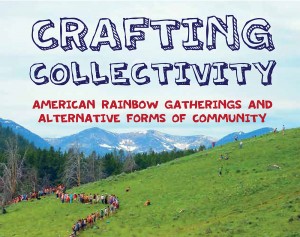 Sociologist Chelsea Schelly, Ph. D. will present a talk entitled, “The Rainbow Way: Participation and Experience in the Rainbow Gathering Culture,” based on her recent book, Crafting Collectivity: American Rainbow Gatherings and Alternative Forms of Community.

The will take place Wednesday, March 25, in the Van Pelt and Opie Library East Reading Room, Michigan Technological University. The event is part of the Library’s Nexus: The Scholar and the Library series. Join us at 4 pm for refreshments. The talk begins at 4:15 pm.

Parking on campus is free after 4 pm.

Nexus: The Scholar and The Library

Drs Elizabeth Flynn, Patricia Sotirin, and Ann Brady from the Humanities Department at Michigan Technological University, will give an invited presentation at 4:30 pm on Thursday, December 6, in the East Reading Room of the Van Pelt and Opie Library on the Michigan Tech campus.

“Resilience” is a powerful term that appears with regularity in times of crisis. Too often, though, it is associated with individual heroism or an innate ability to bounce back. Feminist Rhetorical Resilience, in contrast, associates it with relationality, community, and connectedness. The talk will describe the very different contexts within which the 7 authors of the collection’s essays developed their conception of resilience–biodiversity in India; the Portuguese musical form of the Fado; hymen reconstructions in Turkey; spousal/partner hiring policies at U.S. universities; survival strategies of a poor but proud elderly Detroit woman; the collusion of nineteenth-century feminists with reactionary eugenic rhetoric; and ways of importing queer studies into the writing classroom. The talk will also describe the 7 responses to these essays by scholars in feminist rhetoric. The authors of the original essays, in turn, reflect on the responses. This unusual structure is itself relational, communal, and connected. The process that produced the book also demonstrates resilience. Contributors to Feminist Rhetorical Resilience, for instance, made it to Houghton for a conference coordinated by Flynn, Sotirin, and Brady shortly after Hurricane Katrina despite a closed airport and torrential rain.

The event is part of the library’s events series “Nexus: the Scholar and the Library,” which illuminate ways scholars and scientists productively use libraries and archives. It is open to the public and is sponsored by the Van Pelt and Opie Library. Join us for free refreshments.

Nexus: The Scholar and The Library

Johnson will speak on the development and writing of his recently released book, “Romancing the atom: nuclear infatuation from the radium girls to Fukushima.”  The book chronicles over one hundred years of atomic and nuclear development focusing on what he depicts as the human love affair with the atom.

“I’m also looking forward to being a part of a movement to educate people of all ages about the history and current events regarding the atomic age: what we did, what we have left behind, what we’re still doing,” said Johnson. Drawing examples from the uranium dial painters of the early 1900s right up to the recent nuclear disaster in Fukushima, Japan, Johnson seeks to engage readers and listeners in deep thinking about the atom, nuclear energy and choice.

More on the book can be found at: www.romancingtheatom.com

Before coming to Michigan Tech, Johnson was a professor at the Miami University, Ohio, where he directed a graduate program.  At Michigan Tech, Johnson served as Chair of Humanities for nine years and has been instrumental in the Reading as Inquiry program for first-year students, now entering its tenth year of operation. He has also consulted with a number of corporations, including Microsoft, Lenscrafters, and General Foods. His published works include articles in virtually every major journal in his respective disciplines and the book User-Centered Technology: A Rhetorical Theory for Computers and Other Mundane Artifacts, won the 1999 Best Book Award in Scientific and Technical Communication from the National Council of Teachers of English.

The event is part of the library’s series “Nexus: the Scholar and the Library” which illuminates ways scholars and scientists productively use libraries and archives. It is open to the public and is sponsored by the Van Pelt and Opie Library. Join us for free refreshments. For further information: (906) 487-2500, library@mtu.edu or www.mtu.edu/library