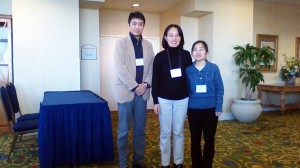 Three physics alumni reunited at the New Faculty Workshop, sponsored by the AAPT (American Association of Physics Teachers), the AAS (American Astronomical Society), APS Physics, the Research Corporation for Science Advancement, and NSF (National Science Foundation). Changgong Zhou, ’06, Lin Pan, ’08, and Haiying He, ’09, were the only cohorts that originated from the same school and knew each other personally.

The Workshop for New Physics and Astronomy Faculty was held on November 7-10, 2013, in the American Center for Physics, College Park, MD. AAPT sponsors programs to help new faculty become more effective educators and support their quest to gain tenure. 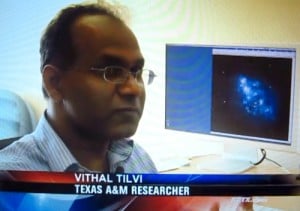 Vithal Tilvi, who graduated in 2006 with an MS in Physics from Michigan Tech, co-authored a paper in Nature on the most distant galaxy as it was 13 billion years ago.

The paper’s lead author is Steven Finkelstein, an assistant professor at the University of Texas at Austin and 2011 Hubble Fellow who previously was a postdoctoral research associate at Texas A&M under the mentorship of Texas A&M astrophysicist Casey Papovich, who is second author as well as current mentor to Tilvi. Ten other international institutions collaborated on the effort, from California to Massachusetts and Italy to Israel.

On a crisp, clear April night, Tilvi, Finkelstein and his graduate student, Mimi Song, sat behind a panel of computers in the control room of the W.M. Keck Observatory, which is perched atop the summit of Hawaii’s dormant Mauna Kea volcano and houses the two largest optical and infrared telescopes in the world, each standing eight stories tall, weighing 300 tons and equipped with 10-meter-wide mirrors.

They detected only one galaxy during their two nights of observation at Keck, but it turned out to be the most distant ever confirmed.

Read more at Science, Texas A&M University. Watch the video of the interview with Tilvi.

El-Ganainy’s work has been published in Optics Express, New Journal of Physics and International Journal of Theoretical Physics. He is a member of the Optical Society, International Society of Optics and Photonics and Institute of Electrical and Electronics Engineers. His research experience includes theory and applications of non-Hermitian optics, quantum effects inside photonic crystal structures and optical nonlinearities in interaction nano-suspensions.

Our Universe Seen With TeV Eyes 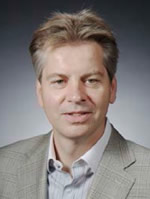