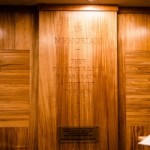 Michigan Technological University has had a War Memorial Wall ever since its Memorial Union Building was dedicated in May 1952, but it only named those lost during World War II and the Korean conflict.