Henquinet Published in the Journal of Applied Volcanology

Luke J. Bowman and Kari B. Henquinet (SS) published an article “Disaster Risk Reduction and Resettlement Efforts at San Vicente (Chichontepec) Volcano, El Salvador: Toward Understanding Social and Geophysical Vulnerability” in the Journal of Applied Volcanology. Bowman is a PhD candidate in the Department of Geological and Mining Engineering and Sciences and Henquinet is the Peace Corps Master’s International Director and a Senior Lecturer in the Department of Social Sciences.

Researchers across the Americas look to forests for power, transportation, fuel and heat. This weekend and into next week, more than 80 researchers from Brazil, Argentina, Canada, Mexico, Uruguay and the US will meet in Houghton to research bioenergy. The work is part of the Partnerships for International Research and Education (PIRE) through the National Science Foundation.

Kathy Halvorsen (SFRES) is leading the research team meeting. She says bioenergy goes beyond just the biofuels discussion and finding alternative fuel for cars. “This a research team studying how we can help to slow climate change and ensure local energy security,” she says. “We also look to minimize the negative impacts of energy choices and maximize benefits.”

In the PIRE research team meeting, Halvorsen will help lead interdisciplinary discussions and research concerning the socio-economic impacts of different forest bioenergy sources. The results and groundwork, however, require the focused efforts of more than a hundred people.

Wellstead Published in Handbook on Complexity and Public Policy 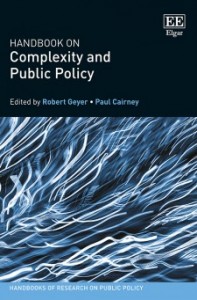 Asst. Professor Steven Walton (Social Sciences) was noted for his contribution to an ongoing project on the “Origins of Firepower” at the Royal Armouries and National Firearms Centre, Leeds [UK] in the Jan. 17-23, 2015 issue of New Scientist.  In “Do it Again: What can we find out by re-enacting the science of yesteryear” [paywall*] (pp. 31-35), Richard Webb reported on replication work with early gunpowder testing apparatus being undertaken by Haileigh Robertson, a Ph.D. student at the University of York, and one of Walton’s advisees. Robertson is exploring the philosophical and technical knowledge about gunpowder int eh early 17th century for a Ph.D. in the history of science, and Walton, an expert on historic gunpowder, built a replica of Joseph Furttenbach’s eprouvette from 1627 (see image) for her to use in testing. The New Scientist article says of their work:

Today Robertson is aiming to repeat the eprouvette work using a replica device built by historian Steven Walton of Michigan Technological University in Houghton. It has two vertical supports about 60 centimetres high, with a post suspended between them. Attached to the bottom of the post is a brass lid which sits atop a small powder chamber and priming pan. When gunpowder is ignited in the powder chamber, the force of the explosion should propel the brass lid and post up past a series of ratchets that flip up, and then catch the lid as it begins to fall. The height the lid reaches is a measure of the gunpowder’s relative potency. Robertson’s collaborator Peter Smithurst, an emeritus curator of firearms at the National Firearms Centre, first packs the chamber with modern “black powder”. Technician Trevor Weston approaches cautiously with a long lit taper. I stand ready with the video camera. “I wouldn’t want to stand too close,” says Robertson, “until we know what it does.” What it does, besides make an almighty flash and bang, is hard to discern at first. But when the smoke disperses, the lid is balancing 13 ratchets up, half a metre off the floor. So far, so good. Less successful are gunpowder mixtures prepared using old recipes by Smithurst, a trained chemist. There is the odd fizzer like a Roman candle, and quite a few proverbial flashes in the pan. No one is sure why these mixtures don’t work as well – perhaps the modern stuff is finer-grained, with a larger surface area to encourage ignition. Or maybe the samples have got damp somehow. Archaeologists and historians alike want to understand the factors affecting the potency of early gunpowder. The power and range of early guns depended on the energy it could generate, so gunpowder influenced not only the design of cannons and armour, but also the evolution of battlefield tactics. By reproducing these experiments we get a feel for what was possible – and an idea of the frustrations.

Chelsea Schelly, Assistant Professor of Sociology, has been awarded an Early Career Research Award from the Rural Sociological Society for her proposal titled “Policies for Self-Provisioning: Understanding the Success of Alternative Rural Communities.”  The award will help support her summer fieldwork in an intentional community, which will be the last empirical case study in her current book project.  The book project examines technology use in intentional and alternative communities, looking at how different kinds of technologies can be used to support residential life, the policies that support alternative technology adoption in these places, and the practices involved in living with technologies that differ from those used to support mainstream residential dwelling.

The Department of Social Sciences invites the campus community to recognize Pat Martin for his 38 years of service to Michigan Tech as Professor of Archaeology. The department will hold a reception to recognize Pat from 3 to 5 p.m. Friday, May 15, on the 2nd floor of the Annex to the Academic Office Building.

Pat, who has served as the Chair of Social Sciences for the last six years, was instrumental in the creation of the department’s Industrial Archaeology graduate program. After his retirement, Pat will remain active as a research professor, initiating projects and advising students, as well as serving as the Executive Secretary of the Society for Industrial Archeology and as the President of The International Committee for the Conservation of Industrial Heritage — so “retirement” is slightly misleading.

Mainstreaming involves integrating climate adaptation measures into existing policies and programs. This article reviews the policy process and policy capacity of government organizations and suggests that both need to be incorporated into climate change adaptation assessments. A critical part of mainstreaming is evidence-based decision-making, which emphasizes that decision makers should have the best available information in order to make knowledgeable decisions. This requires policy work that involves a wide variety of statistical methods, applied research, and advanced modeling techniques to gauge broad public opinion and attitudes as well as more routine research techniques. A review of previous past quantitative studies conducted mainly in Canada identifies factors driving policy capacity within government departments responsible for formulating, choosing, implementing, and evaluating climate change adaptation policies and programs. Policy capacity has traditionally been objectively measured and includes indicators such as the number of policy staff, their education levels, resources available, roles and tasks, and ongoing training. More attention needs to be paid to the subjective perceptions of individuals who undertake policy work, in particular the attitudes towards the policy-making process. This paper concludes by proposing a policy capacity framework that includes individual, organizational, and sectoral policy capacity considerations.

From Tech Today by Mark Wilcox

Bruce Seely, dean of the College of Sciences and Arts at Michigan Tech, has announced that Hugh Gorman will be the next chair of the Department of Social Sciences.

Gorman, who has been on the Social Sciences faculty since 1996, will begin his new duties July 1.  He succeeds Patrick Martin, who completes his term as chair and will retire June 30.

Seely says Gorman has played an integral role in the department’s master’s and doctoral programs in environmental policy. “Hugh is a well-respected scholar in the intertwined communities of history of technology and environmental history,” Seely explains.

Gorman says one of his goals will be to nurture the department’s existing capacity to undertake world-class interdisciplinary research. “Most people are aware of the department’s important contributions to the University’s general education program,” he says. “But our faculty is also producing policy-related knowledge that guides technological development in a direction that encourages uses of the built and natural environment that are sustainable, economically viable and just.”