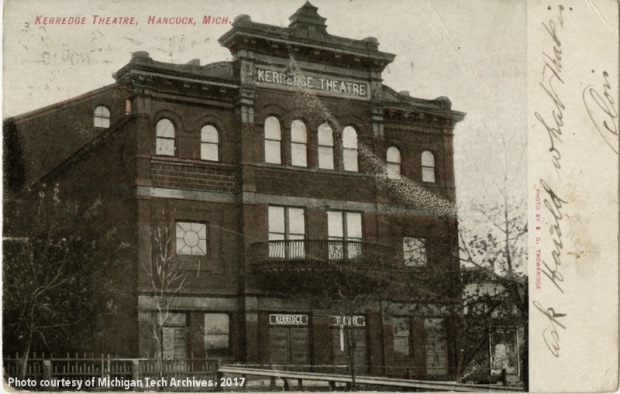 We’ve all needed a little fun lately, and several prior blog posts have discussed what people of the Copper Country did to entertain themselves back in the mining days. We’ve struck up the company band for a relaxing Sunday afternoon concert, and we’ve headed out on the streetcar for picnics at Electric Park. Now let’s all head to the lobby and venture into Hancock’s venerable Kerredge Theatre, a longstanding home for movies, music, and dramatic performances.

When workers began construction of the Kerredge in 1902, it dominated its block of East Quincy Street. Small houses dotted the hillside behind it, and an abandoned tramway path for the Quincy Mining Company separated it from a modest Finnish Lutheran church. A little closer to Ripley, the first luxe mansions had begun to rise in the affluent East Hancock neighborhood. But the Kerredge–three stories tall at its streetfront, five at the back of the lot–rose above all of them. With its heavily-ornamented facade and expansive brick walls, it radiated prosperity and spoke to a Copper Country with grand ambitions.

The men behind the theatre had aspirations to match. Echoes of the great American success story resonated in William Kerredge’s life. His father Joseph, a gamekeeper turned general laborer, and mother Phoebe brought young William over to southern Ontario when he was no more than three years old. From there, evidently concluding that the infant Copper Country held greater promise than Canada, the Kerredges moved to Michigan. By 1870, teenage William resided in Hancock with his parents and two younger sisters. Like his father, who found a post in a local sawmill, William worked as a laborer. By the time he married eighteen-year-old Mary O’Neill in 1879, however, he reported his occupation as merchant. Young William was moving up in the world: he had trained as a tinsmith and embarked in the hardware business. His trade prospered in a growing copper town, one that needed the construction supplies and tradesmen’s tools that Kerredge provided. By the mid-1890s, William and Mary Kerredge had moved into a comfortable, newly-built home in West Hancock; the new residence provided ample space for their son, Ray, daughters Phoebe, Pearl, and Emma, and Joseph Kerredge in his last years.

It isn’t clear what drew Kerredge to the performing arts or when his interest began. As his hardware business took off, however, he began to look beyond the world of saws and nails to curtains and footlights. In 1901, the Polk city directory for Hancock listed him not only as proprietor of the hardware but also of St. Patrick’s Hall, a gathering place for various social groups in town and, in the words of Hancock historian John Haeussler, “arguably Hancock’s premier playhouse” at the century mark. Despite St. Patrick’s success in the arts world, its operator had bigger dreams. He envisioned something grander, something that would attract top-tier acts to the top of the state and provide a beautiful home for community productions. Perhaps the Calumet Theatre, which opened its doors in March 1900, inspired him. At any rate, the Kerredge Theatre progressed quickly from idea to reality. The brick playhouse began hosting productions in 1902 and established itself as a fixture in the community soon thereafter.

In its heyday, the Kerredge could host up to 1,500 theatregoers for a performance, about one-third of Hancock’s population in 1900, and William Kerredge did his best to fill each seat. An article in the Daily Mining Gazette recounted his particular skill in scoring desirable bookings, describing them as “of sterling order,” the type that “put the theater in the field of the most important playhouses in the Midwest.” Variety also characterized the typical Kerredge season, which opened in the last days of summer. Shakespearean dramas arrived in Hancock, as did French operas and stories inspired by the life of Alexander the Great. Comedies, especially musical comedies, proved particularly popular, although most of their titles–”Peggy from Paris,” “Southern Skies,” “David Harum”–are unknown to connoisseurs today. Other oeuvres, like Ibsen’s “A Doll’s House,” resonate through the decades.

These productions, both the ephemeral and the enduring, brought with them actors and musicians from around the globe. Like the economic opportunities of the Copper Country, the allure of the Kerredge was international. Chauncey Olcott, known for making the rounds of Midwestern theatres, performed in Hancock, as well. Enrico Caruso, the celebrated Italian tenor, appeared bathed in the footlights on one occasion. John Philip Sousa brought his ensemble to play his compositions in Hancock. Sarah Bernhardt trod the boards of the Kerredge, and, according to one rumor, even toured the Quincy Mine to experience life underground. Lillian Russell, whose style was as extravagant as her talent, apparently earned twelve overtures in a single performance at the Kerredge. Capitalizing on the quality of entertainers that the Kerredge was attracting, an enterprising mayor of Hancock, A.J. Scott, built the massive Scott Hotel next door, at the corner of Quincy and Reservation in 1906. The luminaries appearing at the Kerredge did not have far to go when they were ready to turn in for the night, and one wonders how many unsuspecting hotel guests ran into a Bernhardt or a Caruso on the way down the stairs in the morning.

Yet the Kerredge was not merely for big names and bright lights; it remained a community theatre in spite of its glamor. Students from Painesdale High School presented “The Dawn of a New Era,” an educational play with themes centered on international peace and women’s suffrage written by local educator Flora Jeffers, at the Kerredge in 1912. The production was just one of many amateur and school presentations to debut in Hancock. Long before the Rozsa opened on the Michigan Tech campus, its students found a welcome home for their dramatic expressions. By the 1920s, college productions of shows like “A Lucky Break” and “The Poor Nut,” described as “a comedy of modern youth,” became springtime staples at the Kerredge. The theatre adapted, as well, to the advent of moving pictures, both for entertainment and education. Fielding Yost, a renowned athletics director at the University of Michigan, projected films of the Wolverines’ football triumphs on the Kerredge movie scrim in 1923 as part of a lecture to Yooper high schoolers. As enticing top acts to the Copper Country became more difficult, the famous faces of America increasingly appeared on screen in Hancock rather than in flesh and blood; live productions at the Kerredge took on an increasingly local character alongside a growing slate of films.

William Kerredge, who had guided his namesake theatre to realization and whose skill had helped it become a dominant force in upper Michigan’s entertainment, served as proprietor for some decades after its creation. He entrusted daily management tasks to his son, Ray, whose responsibility increased after William’s death from a stroke in 1927. Sadly, Ray’s own poor health forced him into retirement in middle age, and he died from heart troubles in 1938. The Kerredge outlived both men. Rallies, movies, and concerts attracted the people of the Copper Country down to their theatre for decades to come, creating memories that senior residents of Hancock cherish to this day.

But all good things come to an end, even those we most enjoy. In the small hours of May 29, 1959, a fire of unknown origin sparked at the Kerredge Theatre. Rapidly, the flames gained speed, consuming everything in their path. Heartbroken former patrons of the Kerredge gathered on the sidewalk by the hundreds, watching the theatre’s walls and roof collapse into a smoldering ruin.

It was the last and most tragic show the Kerredge ever offered.

One Comment on "Flashback Friday: Bright Lights and Big Names"