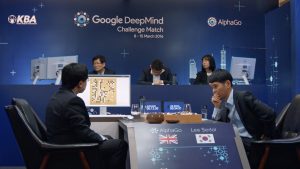 AlphaGo is featured in this year’s 41 North Film Festival hosted by the Rozsa Center for the Performing Arts. Directed by Greg Kohs, the documentary chronicles a journey from the halls of Cambridge, through the backstreets of Bordeaux, past the coding terminals of DeepMind in London, and, ultimately, to the seven-day tournament in Seoul. As the drama unfolds, more questions emerge: What can artificial intelligence reveal about a 3000-year-old game? What can it teach us about humanity?