Fridays with Fuhrmann: On Academic Disciplines 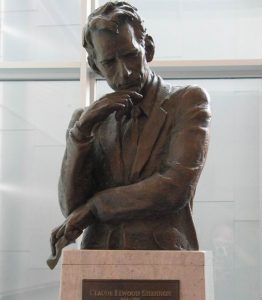 Read just about any description of research activity in the United States today, say from the National Science Foundation, and you are sure to find something about the importance of multidisciplinary or interdisciplinary work. The idea that people need to work together in teams and across traditional boundaries has become dogma in research communities, and casting one’s work in an interdisciplinary light has become all but required for obtaining research funding. Of course, I am all for people working together in teams when that makes sense, and for not letting boundaries get in the way of good work and collaboration. But, the emphasis on interdisciplinary work that has become so prevalent in recent years has gotten me to wonder – what makes an academic discipline, anyway? And who gets to decide?

The reason we have academic disciplines in the first place is that the sum of all human knowledge is vast, and there is no way for any one person to know it all. We have to specialize somewhat, to decide what it is we are good at and what we are passionate about. It also helps for us to build communities of like-minded people, with common knowledge and common values, and from these values are born the branches of knowledge that we think of as academic disciplines. The organization of all universities I can think of is built around such disciplines, usually in a hierarchical manner with very broad categories at a high level (engineering, arts & sciences, business, etc.) then with increasing levels of specialization as you drill down into departments and degree programs. There is no one model for all universities, but a lot of universities in the United States, especially large comprehensive universities, look very much alike.

For the most part this system works pretty well. It facilitates communication and a common sense of purpose among groups of people, and that is usually a good thing for getting work done and discovering new things. For research communities, there is a process one goes through to become a part of the group, called getting a doctoral degree (PhD or similar); usually through qualifying examinations or other milestones one proves that he or she has what it takes to become part of “the club.” When we craft degree programs, even at the undergraduate level, we often ask the question “what is it that we expect everyone in our field to know?” and then build courses and course sequences appropriately. When we go out into the world, we can label ourselves as a certain kind of person with a certain set of knowledge and skills, and this division of labor has served us well economically.

What we have to recognize, however, is that these things that we call disciplines are not necessarily predetermined in some obvious or logical way. Often there is a historical evolution of fields, and the organization may be an artifact of the way things turned out in the discovery of new knowledge. A discipline is a branch of knowledge, and the nature of the branch is a result of how the tree grew. I sometimes think of academic disciplines as “quantization bins” for knowledge, and there are a lot of different ways one could do it. Another analogy is this land mass in North America we call the continental United States. We think of that as being carved up into 48 states which seems natural to us, the proper order of things, but it is really the result of 240 years of history and politics, and if we were to start something from scratch today we might come up with something entirely different. (For an entertaining look at that last topic, read How the States Got Their Shapes, by Mark Stein.)

Sometimes the topics that get mashed together to create a discipline seem really far apart intellectually, although when viewed through an historical lens it makes all the sense in the world. The best example I know is my own field of electrical engineering. This is a relatively new discipline (when compared to disciplines with ancient roots like mathematics or physics) and it has gone through a remarkable evolution in its 150-year history. It began when smart people recognized that these forces of nature we collectively call electricity could be harnessed for the good of society. They developed tools for the generation, transmission, and distribution of electric power, and the use of that power to turn motors and light lights. Shortly thereafter, however, others like Samuel F. B. Morse and Alexander Graham Bell figured out that those same forces of nature, and that same copper wire, could be put to use transmitting information at high speed and over long distances. What happened next was very interesting: in order to take advantage of the new physical technology, we needed a new branch of knowledge to decide how best to encode information into time-varying physical variables like voltage and current, and at its core that branch of knowledge really has nothing to do with voltage and current. What resulted is what we now call communication theory. This new mathematical theory of communication was beautifully crystallized in the work of the pioneering engineer and mathematician Claude Shannon, and an even more mathematically elegant and sophisticated field of information theory was born. Information theory is the foundation for all digital communication that makes smart phones and the Internet work. (Claude Shannon is the closest thing we have in EE to an iconic hero; he is our Albert Einstein. His bronze bust is featured in this week’s photo. There are at least two castings I am aware of, one on the campus of the University of Michigan in Ann Arbor, and the other in his home town of Gaylord, Michigan.) Take a look at the IEEE Transactions on Information Theory and you will find no mention of volts, amps, or watts – it’s all math. Similar stories can be told about signal processing, or control theory, and of course computer science and computer engineering. The field of electrical engineering has branched off in dozens of different directions and now it encompasses a highly diverse set of topics and skills – and yet we still think of it as a discipline with a common core of knowledge.

Having what you do included in a discipline like electrical engineering brings certain advantages. There is the name recognition and the respect that goes with the title of electrical engineer. It is a job title for companies to post, to which prospective employees can respond. It is well-recognized on college campuses and known by students as a great major with lots of potential (we like to think so, anyway). The Institute of Electrical and Electronic Engineering, or IEEE, is the largest professional organization in the world. Essentially, electrical engineering as field, despite its huge technical diversity, enjoys many of the benefits that people look for when they form societal groups – tribes, gangs, whatever you want to call them. We EEs are a tribe with a shared sense of identity.

What about the situation where, in the vast domain of human knowledge, there are bits and pieces scattered about that intellectually could be considered very close, but have not been pulled together into one discipline? One advantage of working in such fields might be that one’s work is always considered interdisciplinary, since it falls in the cracks between the historically established and recognized disciplines. That might be great for writing grant proposals, but I am not sure it outweighs the disadvantages of being academically homeless, of not being part of a tribe with shared values and shared culture. When one works at the boundaries, no matter how artificial those boundaries might be, one never gets to be on the inside. That sense of independence might be exhilarating at first, but after a while it might also get to be disheartening. Chris Byrnes, my former dean at Washington University in St. Louis, said it best when he said: you can’t be multidisciplinary without a discipline.

Those who follow this column and/or know what I have been up to lately will not be surprised to learn that I am talking about computing. I have come to the conclusion that computing in a very broad sense is a discipline, and if it is not it should be. The reason it is not considered a discipline now is much the same reason that electrical engineering is a discipline: it is an artifact of the historical evolution of the field. When I talk about computing I have a pretty big bucket of topics, including: core computer science, software engineering, computer systems, system administration, computer networks, cybersecurity, high-performance and scientific computation, data science, statistics, analytics, information systems, medical informatics, artificial intelligence, machine learning, computer engineering, computer architecture, robotics, automation, the Internet, web-design, graphic design, multimedia systems, video games, human-computer interaction, and probably a lot more. If one looks at that laundry list I imagine that one reaction might be – wow, that certainly is a diverse set of topics. To which I respond, yes, but it is no more diverse than that set of topics that we bundle together and call electrical engineering. Or, if one wants to argue that point (and I could see it) I can certainly say that the list above is not nearly as diverse as everything we call just engineering. The main difference is, while one might find a thread of intellectual consistency throughout those topics, they all came from different areas, unlike the story of electrical engineering where one thing led to another, which led to another, and so on. Furthermore, since there are so many different origins, a variety of different groups can and do lay claim to them. The question we have to ask is, does the current way we think about what is a discipline, or what falls in the spaces between disciplines or overlaps multiple disciplines, continue to serve us in our quest for the discovery of new knowledge?

To be continued. Next week: In Defense of Silos.