ECE 2011-2012 newsletter The Circuit is now available. The publication highlights recent activities in the department including: 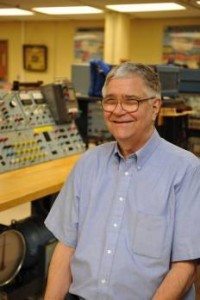 After 42 years of distinguished and dedicated service to the Department of Electrical and Computer Engineering and Michigan Tech, Professor Dennis O. Wiitanen announces his retirement, to be honored May 4, 2012. Prof. Wiitanen is a nationally recognized leader in electric power and energy systems. His most significant impact and his lasting legacy, though, is in undergraduate education. Thousands of Michigan Tech students have completed his classes in power system design and analysis, and have gone on to take their place in the workforce.

Dennis was, and continues to be, a tireless team member and advocate for the Department of Electrical and Computer Engineering. No one knows more about the inner workings of the Department. He has served as the Associate Chair for the Department for twenty-five years and for five different chairs. For many of those years he was Chair of the Undergraduate Programs Committee, guiding the evolution of our educational programs to keep pace with ever-changing technology and workforce needs.

We invite you to participate in a very special initiative being put forward by the ECE Department, an initiative to honor Dennis Wiitanen on the occasion of his retirement. In recognition of everything that “Doc” has done, the Department is establishing the Dennis Wiitanen Professorship in Electric Power Systems. The funding to make this professorship a reality is 70% in place, but we need your help to finish the job. Our goal is to raise $300,000 to bring the total endowment to $1 million. Endowments are private gifts invested to produce income annually for use as faculty support, scholarships, or other needs. In this case, the income would be used to support the Wiitanen Professorship holder and to provide funds for supporting ECE students, purchasing equipment, and funding travel. Your gift can make it happen.

This will be a unique professorship on the Michigan Tech campus, in that it will be named in honor of one of our own rather than a single external donor. Several years ago, a fund was established for a professorship in electric power systems; gifts were solicited from several industry partners, with the primary contributors being Detroit Edison, Consumers Energy, Northern States Energy (now Xcel Energy), Upper Peninsula Power, and Wisconsin Public Service. The account has sat dormant, accumulating investment income, but the time has come to put the money to its intended use. Because the funding sources are so diverse, the ECE Department decided that the best title to put on the position is the name of the one person with a common connection to all of these entities, someone who has had a bigger role in the education of power engineers than anyone else at Michigan Tech: Dennis Wiitanen. For more information or to make a gift or pledge.

It is our goal to have everything in place by the time of Prof. Wiitanen’s retirement dinner, which will take place on the Michigan Tech campus on Friday, May 4, 2012. Please join us in celebrating the many accomplishments and contributions of Dennis O. Wiitanen to the Department of Electrical and Computer Engineering and Michigan Tech University. See Wiitanen Celebration for event details and to purchase tickets.

The Rail Transportation Program (RTP) and the Rail Engineering and Activities Club (REAC) announce the seventh annual Railroad Night from 7 to 10 p.m., Tuesday, Feb. 21, at the Shelden Grill in the Magnuson Hotel, Houghton.

This year’s keynote speaker is Kevin Kesler, chief engineer in the operating practice division for the Federal Railroad Administration (FRA).

Student admission is $3 for the event (or $5 for admission plus REAC membership). REAC is open to all students of any discipline. For more information, see Rail.

Tickets will be on sale through Feb. 17 for students:

There is no fee for faculty or administrators, but an RSVP to Pam Hannon at prhannon@mtu.edu is required by Friday, Feb. 17, as well.

The Railroad Engineering and Activities Club (REAC) will hold a business meeting from 6 to 7 p.m., today, in Dillman 214.

REAC is open to members of any discipline who have an interest in finding out more about REAC activities and the rail industry.

Pizza and pop will be provided.

For more information, contact Pam Hannon, coordinator, MTTI, at 487-3065 or at prhannon@mtu.edu .

The Michigan Tech Sustained Support to Ensure Engineering Degrees (SSEED) program (funded by NSF S-STEM) is in its second year of four. In 2011-12, the program awarded 33 scholarships ranging from $1,000 to $5,000 to engineering juniors and seniors. The program awarded five fellowships of $8,000 each to first-year engineering graduate students.

For more information, see SSEED, or contact Michele Miller at 487-3025 or at mhmiller@mtu.edu . 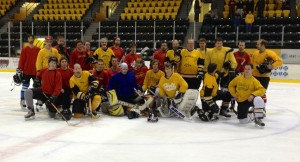 Faculty school Students 11-8 in the annual ECE Faculty vs. Students Hockey Game held on Saturday afternoon, December 10, 2011 at the John J. MacInnes Student Ice Arena. Team captain, Jeff “Bad Dog” Burl lead his team to a narrow win against the youthful 18-player student team. Leading the scoring for the faculty was Guy “We Needed a Fast Guy” Hembroff; goalies Scott Geverink and Chris Carrier kept it all together between the pipes.

The teams were cheered on by fans of all ages including a visit from the Huskies Pep Band. Prizes and pizza were enjoyed by all after the game in the SDC’s Blue Line Room.

The 2011 ECE Student Awards Banquet was held on Thursday, April 14, 2011 in the Memorial Union Building Ballroom on the Michigan Tech campus. The banquet is held each spring to honor ECE senior students and senior design/enterprise teams. It is also a time to recognize those who have gone above and beyond in their contribution to academics and the community. This year the ECE department was proud to present the following awards.

Another highlight of the awards ceremony is the presentation of the Eta Kappa Nu Honor Society “Outstanding Professor of the Year” award. This year’s recipient was Dr. Chris Middlebrook, Assistant Professor in the area of Photonics. Dr. Middlebrook began teaching at Michigan Tech in fall 2007.

The ECE fall 2010 newsletter, The Circuit is now available. The publication highlights recent activities in the department including:

> Dave House:  Why Research is Key to the Future of Tech and to ECE

Computer engineering and computer science are both key to advancing knowledge of computing. The engineers focus on design and integrating software and hardware, while the scientists concentrate on analysis and the fundamental nature of computing.

Now, with the enthusiastic support of the Department of Computer Science, the Department of Electrical and Computer Engineering is creating a space where Michigan Tech’s computer engineers and scientists can put their heads together.

The new Center for Computer Systems Research will occupy the entire fifth floor of the Electrical Energy Resources Center (EERC). The Seaman Mineral Museum, a longtime tenant of the area, will be moving to a new building in the Advanced Technology Development Complex. Construction on the center is slated to begin December 1, with the opening expected in April 2011.

“We’re excited about working with the computer science department on this,” said Dan Fuhrmann, chair of electrical and computer engineering. “We’ll be looking at experimental architectures, new applications, and new ways of doing computing.”

Steven Carr, interim chair of computer science, is equally enthusiastic. “It’s a really neat opportunity for Computer Science and Computer Engineering to finally collaborate in a much more defined way,” he said. “We have always worked well together, and there are faculty in both departments who have the potential to cooperate closely on large projects. The center will play a big role in making that happen.”

The half-million-dollar renovation is funded in part by two $150,000 gifts, one from the James Fugere Foundation and the other from the Dave House Family Foundation. The remaining $200,000 is being underwritten by numerous smaller donations given to the department over the last several years.

“The fact that this is made possible completely by alumni donations is phenomenal,” said Fuhrmann.

Brainstorming for the new center began over a year ago, when Michigan Tech launched a strategic initiative to hire faculty in the area of computational discovery and innovation. Through the initiative, the department has gained two new computer engineering faculty, Zhuo Feng and Saeid Nooshabadi.

“We started thinking about what we could do to reinforce the hiring initiative and our relationship with the computer science department,” Fuhrmann said. In addition, the computer engineering program was growing; with new master’s and PhD degrees, it needed more space.

The Center for Computer Systems Research addresses all three issues. The new faculty are expected to be heavily engaged; Nooshabadi in particular will play a leadership role, since his research crosses the disciplines of electrical engineering and computer science. Preliminary plans include offices that can be used by faculty from both departments, informal meeting rooms, laboratory space, a conference room, space for graduate students, a seminar room, and even a kitchen. A department committee chaired by Senior Lecturer Glen Archer provided guidance to OHM Engineering Services in Hancock, which drew up the plans.

The center represents a huge step forward for the department, and it wouldn’t be happening without support from alumni, Fuhrmann stressed. “I’d like to thank all of you who have contributed to the department over the years,” he said. “Your generosity has made this possible. We literally couldn’t have done it without you.”

“This is one of the first designs of an optical cloak, in particular, of a cylindrical shell,” Semouchkina told PhysOrg.com. “This is a non-metallic low-loss all-dielectric cloak. … In contrast to the previous designs, the design of our cloak has been developed at a careful control of interactions between resonators, since a true multi-resonator structure has been simulated. It makes the design essentially more reliable.”

The structure of the proposed cloak consists of identical nanosized chalcogenide glass resonators arranged in a concentric pattern. In simulations, the researchers found that glass resonators in the shape of a cylinder with a diameter of 300 nm and a height of 150 nm provided the best results for the light wavelength of 1 micron.

“The design employs identical resonators in all layers of the cloak, which, from the point of view of fabrication tolerance, presents a tremendous advantage versus fabricating nano-sized elements of different prescribed dimensions,” Semouchkina said.

The spoke-like configuration of the resonators forms radial magnetic moments despite different incidence angles of incoming light. As Semouchkina explained, the magnetic resonance response creates the desired effective parameters of the medium. [Read more at Physorg.com]