A study by Nathan Manser (GMES/EF) on human pathogen destruction in resource recovery systems is cited in the World Health Organization’s recent Guidelines on Sanitation and Health.

The purpose of these guidelines is to promote safe sanitation systems and practices in order to promote health. They summarize the evidence on the links between sanitation and health, provide evidence-informed recommendations, and offer guidance for encouraging international, national and local sanitation policies and actions that protect public health. The guidelines also seek to articulate and support the role of health and other actors in sanitation policy and programming to help ensure that health risks are identified and managed effectively. World Health Organization

Simon Carn on the 2018 Ambae Eruption 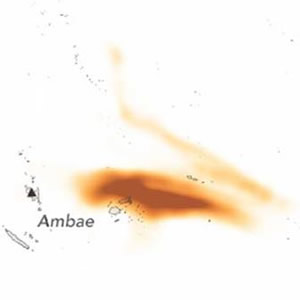 Simon Carn (GMES) was quoted in the story “From NASA Goddard Space Flight Center: ‘2018’s  Biggest Volcanic Eruption of Sulfur Dioxide,'” in sciencesprings. The story was also covered in Long Room, What’s Up with That? and Science Daily.

“With the Kilauea and Galapagos eruptions, you had continuous emissions of sulfur dioxide over time, but the Ambae eruption was more explosive,” said Simon Carn, professor of volcanology at Michigan Tech. “You can see a giant pulse in late July, and then it disperses.”

Aleksey Smirnov is an Excellent Reviewer

Aleksey Smirnov (GMES) has been recognized as an Excellent Reviewer for 2018 by the Editorial Board of Earth, Planets, and Space (EPS).

EPS is the flagship journal of the Society of Geomagnetism and Earth, Planetary and Space Sciences, the Seismological Society of Japan, the Volcanology Society of Japan, and the Japanese Society for Planetary Sciences. It is an open access journal. All articles are made freely and permanently accessible online immediately upon publication.

It is essential for an academic journal to have qualified reviewers to maintain its scientific standard. EPS

Simon Carn (GMES) was quoted in the article “Why Is a Climate Change Skeptic Headlining Science Conferences?” in the Daily Beast. Carn refutes statements made by retired geophysicist Peter Ward that volcanic eruptions, not greenhouse gasses, are responsible for climate change. Ward made the comments in an address to the Geological Society of America.

Why Is a Climate Change Skeptic Headlining Science Conferences?

The Geological Society of America—the country’s premier research and professional organization for geologists—met in Indianapolis earlier this month.

Amidst the otherwise nerdy, sleepy lectures on volcanoes, rocks, and other natural formations was one from Peter L. Ward, a retired geophysicist, who delivered a talk on how volcanic eruptions—not greenhouse gases—are behind climate change.

That’s odd, since the role of greenhouse gas emissions as the primary cause driving climate change is universally backed by scientists.

“Peter Ward has claimed that ‘all’ volcanic eruptions deplete ozone, including the type we call ‘effusive,’ like the eruption of Kilauea that occurred last summer in Hawaii,” volcanologist Simon Carn, an associate professor [now full professor] at Michigan Tech, told The Daily Beast.

Effusive eruptions, in which lava steadily flows out of a volcano onto the ground, typically inject gases to much lower altitudes than explosive eruptions. That means they’re highly unlikely to deplete ozone. “They don’t produce very much chlorine/bromine, and the emissions do not reach the stratosphere where the ozone layer is located,” Carn explained. “His ideas linking volcanic eruptions to ozone depletion and global warming are completely unsubstantiated.”

Read more at the Daily Beast, by Bahar Gholipour.

Simon Carn (GMES/EPSSI) is the principal investigator on a project that has received a $65,671 contract from the University of Wisconsin-Madison.

The title of the project is “Use of Direct Broadcast POESS and GOES for Localized Convective Weather Forecasting.”

Gierke and Oommen Present in Tbilisi

John Gierke, professor and chair of GMES and Thomas Oommen (GMES) presented collaborative work on “Field Data Collection and Slope Stability Analysis in the Vicinity of the Enguri Dam” and “External Loadings and Landslide Hazards at Enguri,” respectively, at the culminating meeting for the international project funded by NATO’s Science for Peace and Security: “SfP G4934 Security Against Geohazards at the Major Enguri Hydroelectric Scheme in Georgia.”

Kenneth Hinkel (GMES/EPSSI) is the principal investigator on a project that has received a $75,436 research and development grant from the National Science Foundation. The project is titled “Collaborative Research: Causes and Consequences of Catastrophic Thermokarst Lake Drainage in an Evolving Arctic System.” This is a three-year project.

Lakes are abundant features on coastal plains of the Arctic, providing important fish and wildlife habitat and water supply for villages and industry, but also interact with frozen ground (permafrost) and the carbon it stores. Most of these lakes are termed “thermokarst” because they form in ice-rich permafrost and gradually expand over time. The dynamic nature of thermokarst lakes also makes them prone to catastrophic drainage and abrupt conversion to wetlands, called drained thermokarst lake basins (DTLBs). Together, thermokarst lakes and DTLBs cover up to 80% of arctic lowland regions, making understanding their response to ongoing climate change essential for coastal plain environmental assessment. 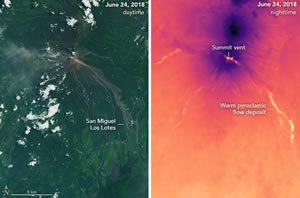 On June 3, 2018, torrents of hot ash, rock, and gas poured down ravines and stream channels on the slopes of Volcán de Fuego—Guatamala’s Volcano of Fire. More than three weeks after the eruption, the Landsat 8 satellite continued to detect elevated temperatures in some of the pyroclastic flow deposits.

“Fuego left pyroclastic flow deposits that cooled down quickly at the surface but are still very hot inside,” explained Michigan Technological University volcanologist Rüdiger Escobar-Wolf. “Cooling deposits can show surface temperatures above the background level for a long time—weeks, or even months. However, that temperature may be only slightly above the background level, as the heat from the interior slowly seeps out of the deposit to the surface.”

Rudiger Escobar-Wolf (GMES) is the principal investigator on a project that has received a $115,024 research and development grant from the National Science Foundation.

This Rapid Research Response (RAPID) award will be used to better understand the deadly eruption at Fuego volcano (Guatemala) on June 3rd, 2018, and in particular the pyroclastic density currents (PDCs) that caused the fatalities. How those PDCs initiated, what caused them to move that far, and what could be the conditions under which they may form in the future, are all poorly understood issues. By looking at the PDCs deposit, mapping them and study their stratigraphy in the field, analyzing the the chemical, petrological, and physical characteristics (density and vesicularity, grain size distribution, etc.), and by using numerical models to understand their flowing dynamics, this team hopes to be able to tell where the PDCs material came from, and how it was fragmented and transported. They will also look at geophysical and geochemical monitoring data leading up and during the eruption, particularly from the local seismic network and satellite remote sensing data, to characterize other aspects of the eruption as well (eruption intensity and duration) and put the PDC information in that context. This knowledge will improve our understanding of the formation of this kind of PDCs, particularly at basaltic volcanoes like Fuego, and could be relevant to many other similar volcanoes worldwide and in the US.

Mapping Lahar Threats in the Aftermath of Volcán de Fuego

Greg Waite is an Outstanding Reviewer

Greg Waite (GMES) was among the “Outstanding Reviewers of 2017” named by Eos, Earth & Space Science News. According to the American Geophysical Union (AGU), the reviewers listed “have all provided in-depth evaluations, often over more than one round of revision, that greatly improved the final published papers. This increase in complexity, in turn, has increased the challenge and the role of reviewing.”

Winning reviewers were selected by the editors of each journal for their work. Editor M. Bayani Cardenas cited Waite for his service to Geophysical Research Letters.

Quality peer review is thus a critical part of the social contract between science and society.Eos

Read more at Eos, by Brooks Hanson and Lisa Tauxe.