Founded in 1919, the American Meteorological Society (AMS) is the nation’s premier scientific and professional organization promoting and disseminating information about the atmospheric, oceanic, hydrologic sciences. 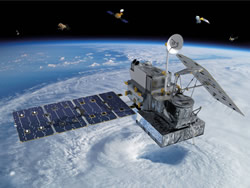 Mark Kulie (GMES/EPSSI) is the principal investigator on a project that has received an $86,255 research and development grant from the NASA. The project is entitled “Snowfall in the GPM Era: Assessing GPM Snowfall and Ice Microphysical Retrievals Using Independent Spaceborne and Ground-Based Observations.” This is the first year of a potential two-year project totaling $186,255.

Chad Deering (GMES/EPSSI), is the principal investigator on a project that has received a $250,718 research and develop grant from the National Science Foundation.

The project is titled “Assessing Changes in the State of a Magma Storage System Over Caldera-Forming Eruption Cycles, a Case Study at Taupo Volcanic Zone, New Zealand.”

This is the first year of a potential three-year project which could total $349,665.

The largest volcanic eruptions are rare events but can represent a global catastrophe. Smaller eruptions may still have significant (billions of dollars) economic impacts and may affect the lives and livelihoods of large numbers of people, even in places distant from the erupting volcano (e.g., the relatively small eruption in Iceland in 2010). This project focuses on the Taupo Volcanic Zone (TVZ) in New Zealand as a case study of a large and very active volcanic system, and will focus on developing a better understanding of how the temperature and mobility of a magma body below the surface changes before, during, and after a major eruption. This study will contribute to our understanding of the volcanoes that produce such large eruptions (for example, Yellowstone volcanic system in the US), and will provide critical context for interpretation of real-time hazard monitoring at these and other active volcanoes. In addition, the project will include research experience for a K-12 teacher and development of new standard-based physics, chemistry and mathematics curriculum that will be disseminated broadly.

The Ontario Geological Survey, Ministry of Northern Development and Mines and the A. E. Seaman Mineral Museum teamed up to co-host the 63rd Annual Institute on Lake Superior Geology held in Wawa, Ontario May 8-12.

The meeting was attended by 137 geologists from the US and Canada. Academic institutions (58 members), government agencies (28 members), and mining and consulting companies (36 members) were well represented among attendees.

The Institute publishes technical volumes in hard copy for each meeting and offers them open-access online after the meeting is completed.

The Institute is well regarded for its high quality field trips having recently won a national award from the Geoscience Information Society for the Outstanding Geologic Field Trip Guidebook Series.

The Institute initiated a new annual award for 2017, Pioneer of Lake Superior Geology, to recognize those individuals who made significant contributions to the understanding of the geology of the Lake Superior region primarily prior to the Institute’s awarding of the prestigious annual Goldich Medal in 1979.

The first Pioneer of Lake Superior Geology is Douglass Houghton (1809-1845). Bornhorst nominated Houghton for the award and wrote, along with Larry Molloy, President of the Keweenaw County Historical Society, the two-page biographical sketch published in the Proceedings Volume. As the first speaker for the technical sessions, Bornhorst provided the highlights of the important attributes that contributed to Houghton’s success.

James DeGraff (GMES/GLRC) is the principal investigator on a project that has received a $27,500 research and development contract from the US Geological Survey. The project is “The Keweenaw Fault Geometry, Secondary Structures and Slip Kenematics Along the Bete Grise Bay Shoreline.”

Nasa scientists warned that the volcano may have spewed out large amounts of sulphur dioxide (SO2), which is harmful to human lungs.

The higher SO2 amounts downwind could be due to multiple factors, including variable emissions at the volcano (such as an initial burst), increasing altitude of the plume downwind or decreasing ash content downwind,

Read more at the Daily Mail, by Will Stewart.

Simon Carn (GMES) discusses sulfur dioxide emissions in an article accompanying a NASA Image of the Day showing the extent of the fires in Mosul, Iraq. 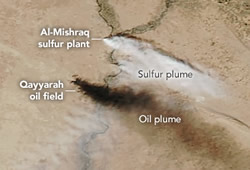 In June 2003, atmospheric scientists at NASA’s Goddard Space Flight Center and the University of Maryland, Baltimore County, used satellites to track how much sulfur dioxide streamed into the atmosphere from a fire at a sulfur mine and processing facility near Mosul, Iraq. They calculated that the fire at Al-Mishraq, which burned for nearly a month, released 21 kilotons of toxic sulfur dioxide per day. That is roughly four times as much as is emitted each day by the world’s largest single-source emitter of sulfur dioxide, a smelter in Noril’sk, Russia.

More recently, sulfur dioxide has been lofted to higher altitudes where it may undergo long-range transport. —Simon Carn

News outlets around the world covering the Mosul, Iraq fires quoted Simon Carn (GMES) for his work in sulfur dioxide emissions. The original story was posted by NASA’s Earth Observatory along with satellite images; news outlets include ABC News, Nature World News, Yahoo News and a number of science blogs.

The Smithsonian Magazine referenced Simon Carn’s (GMES) volcanology research, which seeks to incorporate emissions data into the Smithsonian database, in a feature story along with an interactive map.