I was recently given the opportunity to be a Lean facilitator for a 5S Kaizen event. The goal of the event was to organize the Van Pelt and Opie Library staff document management system. I found this to be a great project and was inspired by the event to write a blog post going over some of the lessons learned. The project also remind me of how the 5S method (Sort, Set in order, Shine, Standardize, Sustain) can be applied to both Google Drive documents as well as Network Drive documents. 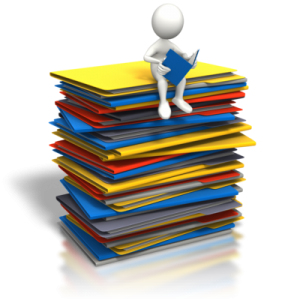 Here are some things to try when working with a large documentation systems: 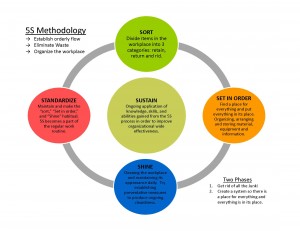 If you want to see some of the tools and templates that our office has compiled on 5S feel free to check them out here. To learn more about continuous improvement at Michigan Tech visit http://www.mtu.edu/improvement/, or call (906) 487-3180.  We have multiple resources for you, including a Lean lending library!

Hello, this is Elizabeth, one of the student process improvement coordinators at Michigan Tech. This semester one of the classes I am taking within the department of mechanical engineering is “Engineering Design Process.” Within the class we are charged with designing a way to change the landscape of the moving luggage industry. Innovation is one of the main objectives. I decided to look at how I could integrate my course work and job. Taking advantage of the Lean Library in the Office of Continuous Improvement  I checked out the book The Innovators Toolkit. 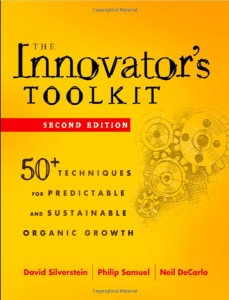 The book starts off with having the user define the opportunity. It stated that, “Taking thousands of shots at an undefined target (unfocused ideation) won’t result in any innovation goal”.  From here the book is broken up into four parts; defining the opportunity, discover the ideas, develop the designs, demonstrate the innovation. Within these four parts there are different techniques to be used. I chose to focus on part two – discover the idea and more specifically technique 16: trend prediction.

In this age of rapid change and a push towards innovation it is important to be able to accurately predict where future trends will be in order that one’s invention matches the needs and wants of those trends. After searching around online I found that a lot of the organizational templates used in the book are available to the public for free. I would encourage you to look at them and use them to your advantage

Lately Affinity Diagrams have been used a lot! So I thought what better way to showcase this improvement tool than with a blog post.

Affinity Diagrams are tools used by groups to gather and sort ideas and issues when brainstorming. Affinities provide structure to and help initiate action in brainstorming sessions. They also support teams by allowing them to work on a creative level with difficult or emotional issues.

Affinities are great to use and extremely simple! All you need are sticky notes, markers, and flip chart paper (if available, if not just use a wall). Tell your team/group what the topic is they are brainstorming on and ask them to write down their ideas or issues on a sticky note. This allows their thoughts to be private if the subject is sensitive. Once complete, gather all the stickies and place them into several groups (the groups will become evident when reading the stickies). It’s as simple as that. This information can then be easily created on the computer for storage purposes. 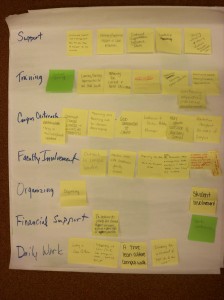 For example The Leaders in Continuous Improvement student organization used an Affinity Diagram when brainstorming different ideas and events for the upcoming semester. This allowed all of the members to come up with several different ideas without being persuaded by any other members. The results were fantastic! Once completed the different ideas were transferred into a computer document and sent out to the members. Another example of Affinity Diagrams was at the Termination Process Kaizen. Affinity was a great tool to get the group to “vent” about the many different issues with the current termination process. The end results allowed the facilitator and team leader to see where the majority of complaints/issues were coming from.

Affinities are great for all projects, so don’t be afraid to get out there and affinitize!

Are you always searching for lost files or tools? Do items from your area seem to just “go missing”? Is it hard to find files on your shared network drive?

If you answered yes to any of these questions, the 5S Blitz might be for you! The 5S Blitz is a Lean Workshop for those who are interested in learning more about Lean and in using 5S to improve their (physical or virtual) work spaces. 5S can be applied to your personal desk, a lab, a supply area, a network drive, and more! The workshop will be taking place on January 28, 2014.

In the 5S Blitz, participants will have a learning session in the morning, and then will be able to go to their work space to start implementing 5S with the help of a campus Lean facilitator before coming back in the afternoon to share their progress and any lessons learned. Throughout the following two weeks, participants can continue to work on their 5S project before sharing their experience in an open report out.

If you’re interested in participating, you can find out more and register today on the Lean Workshops page of our website. You can participate individually or with others from your work area. All you need to register is a 5S project idea!

Book Review: The Five Dysfunctions of a Team

Recently in my Senior Design class the instructor recommended that we all read the book The Five Dysfunctions of a Team by Patrick Lencioni.  The book is a business story centered on Kathryn, a new CEO to a failing high-tech company, DecisionTech.  Throughout the story Kathryn works her way to the root causes of the executive team’s failures that made me think about lean philosophy.  Although the book never specifically refers to lean, many of the principles presented are similar.

Although DecisionTech’s product was great, and there was plenty of money from investors, for some reason the company was failing miserably.  For this reason the Board of Directors hires Kathryn to be the new CEO.  Kathryn has previous executive experience in the automotive industry (there is a reference to a joint US-Japanese automotive plant in California), and she is older than everybody else on the executive team.  For the first two weeks after being hired Kathryn has the previous CEO (who still works for the company) run the business as usual for Kathryn to observe.  Kathryn walks around talking to employees at all levels and attends as many staff meetings as possible.  When I read this I immediately thought about Gemba Walks and the importance of going to see problems at their physical location.

The book goes on to discuss the five dysfunctions of a team, which are:

All of the dysfunctions tie in with each other, and although none are explicitly lean they can all be related to some aspect of lean philosophy.  “Respect for people” is one of the cornerstones of lean that encompasses all five of the dysfunctions.  For instance, a team that respects its own people would have no problem with healthy conflict and problem solving.  Kaizen events may have intense discussions during root cause analysis or four-step problem solving, but as long as the discussion is “hard on the process, easy on the people” a team can show each other respect.

Overall the book was a quick read that provides a new perspective on teamwork.  Patrick Lencioni does not specifically call out any lean principles or tools, but many of the same thought processes are evident throughout the storyline.  Finally, the storytelling method focusing on Kathryn keeps the book fast-paced and lively resulting in an enjoyable reading experience.

If you are interested in expanding your continuous improvement knowledge, consider checking out a book from the “Lean Library“, located in the Continuous Improvement Office . 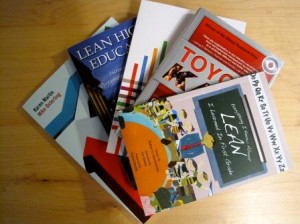 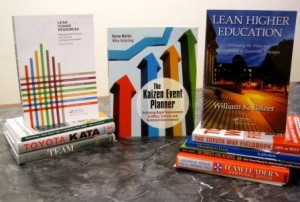 A recent kaizen event addressed a couple problems in residential dining: unauthorized access into the dining halls, and theft of food and utensils.  One tool that we used to drive each day’s discussion was a Fishbone Diagram.  After determining what was currently happening in contrast to an ideal state, a fishbone diagram was created to understand what problems stood in the way of reaching the future state.

The team brainstormed these problems and listed them on the diagram under headings (see picture below).  The diagram aided in creating good discussion and exploration of the problem, the team members were able to piggy-back ideas that related to each other.

After the brainstorming cooled down and the team felt the diagram was complete, various techniques were used to prioritize the issues to see which ones will be tackled and in what priority.   Common themes easily emerged showing where the team should focus their efforts.  At the end of the kaizen event the team had a clear understanding of the problem, its causes, and where to go with countermeasures to improve the problems.

I just wanted to pass along a great resource to the campus community: The Michigan Lean Consortium (MLC).

I have been in touch with some board members from the MLC for a few months now, they are making great strides to bring Lean practice to Michigan businesses.  One of our Lean training consultants  is the Secretary of the MLC, Mike Taubitz.

The MLC offers Lean learning events which are typically many driving hours away from Michigan Tech.  However, they have now begun recording these sessions.  Read about their latest event on Lean Leadership and find links to watch the recording HERE.

If you are interested in expanding your continuous improvement knowledge, consider checking out a book from the new “Lean Library” in the process improvement office.  We will also be expanding our collection in the next few weeks so any recommendations you have would be much appreciated.

In order to solve problems and make improvements, we need to encourage ourselves and people who are involved in a process to question it.

“This is my process, and it doesn’t work as well as I think it should.  Why?“

By asking “Why?” you can identify problems and their root cause allowing you to work towards making the right improvement.  One simple method for solving problems is just that—asking “Why?”  Again and again and again until you get to that root cause.  To learn more about the 5 Whys technique, click here.