Please join us for visiting scholar Shannon Kirkwood at 4:00 pm on Thursday July 17 in the East Reading Room of the Van Pelt and Opie Library on the Michigan Technological University campus. This event is free of charge and open to the public. Refreshments will be served.

In this presentation, Kirkwood will address the politics of female space in a male-dominated labor movement, as well as class consciousness based home, kin and neighborhood networks. These themes will be discussed in the contexts of the Copper Country, Seattle and Glasgow.

Kirkwood’s research visit and presentation are supported by a travel grant from the Friends of the Van Pelt and Opie Library. Since 1988, the Michigan Tech Archives Travel Grant program has helped scholars advance their research by supporting travel to the manuscript collections at the Archives.

For more information, feel free to call the Michigan Tech Archives at 906-487-2505, email at copper@mtu.edu, or visit them on the web at http://www.lib.mtu.edu/mtuarchives/. 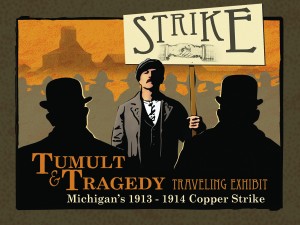 Recalls: For Van Pelt and Opie Library books, a patron may recall a loaned item. The current borrower has 21 days to return the item although we welcome feedback about this timeframe. When the returned item is not returned by 22 days, our fine will increase to $5.00/day from $1.00/day. The high demand on recalled items has made it necessary for us to study practices and fine levels at other research universities who are successful in obtaining prompt returns. The library staff is also studying the potential need for increasing the overdue fines on our convenience items (cameras, calculators, laptops) due to the high demand and high level of overdue items. The increase in the recall fine for books will go into effect on February 15th.

Recalls: Beginning February 15, all interlibrary loan borrowers will be charged $5.00/day for any items they fail to return after receiving a Recall Notice from the library. The fine will go into effect three days after the borrower is sent the recall notice. Recall dates may vary by lending library. In most cases, a borrowed item can be renewed before the due date. This policy and the amount charged is customary at other research universities in Michigan. Delays in returning borrowed materials jeopardizes a lending library’s willingness to continue to lend to us.

Computers are available in the library instruction rooms (library 242, 244) when they aren’t in use for instruction.

These computers are installed with the common campus core software and the library login.

Just use your HuskyCard to swipe in.

The Experimental Education Environment (E3) is a new space meant to support all Michigan Tech instructors’ experimentation with instructional designs, use of instructional technology or educational media and room or furniture arrangement. As a collaboration among the staff of the Jackson Center for Teaching and Learning, Information Technology’s Media Services and the Van Pelt and Opie Library staff, instructors interested in using this space for formal instruction or informal student groups will receive support for their pedagogical ideas or challenges from the Center for Teaching and Learning’s instructional designers or technology idea support from IT’s Media Services.

For more information on scheduling or to register for upcoming orientation sessions, click here.

The Van Pelt and Opie Library has introduced expanded hours.

The new Library Overnight Services are midnight to 8 a.m. every day for current Michigan Tech students, faculty and staff. Hours for guests, visitors and members of the community have also been increased from 8 a.m. to midnight daily.

Entry into the library for overnight services will be at the library’s main door with an active HuskyCard.

For updates about Browzine from Third Iron, check out their Facebook page: https://www.facebook.com/thirdiron

William “Bill” Sproule, professor of civil and environmental engineering, will describe how copper mining’s boom period and winters with over 200 inches of snow led to the development of streetcar lines that served over six million riders at their peak in 1910.

Books, along with Dining Services’ cream cake and fabulous citrus punch will be available. For further information, contact the Office of the University Librarian 7-2500 or library@mtu.edu. 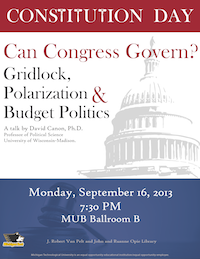 The campus is invited to celebrate Constitution Day on Monday, Sept. 16, at 7:30 p.m. in MUB Ballroom B. The guest speaker, David Canon, professor of political science at the University of Wisconsin-Madison, will explore the context of gridlock and polarization in Congress, outline the stakes of the current budget battles and speculate about what can be done to improve the political climate in Congress. More information.

Tours of the Van Pelt and Opie Library are available every Tuesday and Thursday at 1:00PM.

There is no need to sign up, just meet at the Library and IT Service Center near the main entrance.