The School of Business and Economics awards annual scholarships to students who participate in the Applied Portfolio Management Program (APMP).  The scholarships are made possible by generous donors who have setup funds to recognize specific skill sets and characteristics in the recipients.  Each scholarship is awarded in the Spring of the academic year. We are very grateful to the generous donors that provide excellent opportunities to stand-out APMP students at Michigan Tech.

The Clarence Fisher, Chester Rheault, and Norb Verville APMP scholarships recognize the impact these three former Advisory Board members had in founding APMP.  Recipients of these scholarships this year were: Jesse Patrick, Todd Storm, and Mike Harri, respectively.

As an APMP Board member from origination through today, the Hugh Makens APMP scholarship honors Hugh’s continual support of the students and the program.  Pat Carroll is the 2012 recipient.

Dan Eskola was the recipient of the LSGI Fund Scholarship, also known as the Joe Dancy LSGI Scholarship.  This scholarship is awarded to the student who displays excellent academic achievement, expresses an interest in finance or applied mathematics, and demonstrates high moral and ethical characteristics.  The LSGI Fund is a hedge fund managed by Joe Dancy, a Michigan Tech alumnus from Dallas, TX.

Finally, the Jeff Call Memorial Scholarship was given to Rachael Ristau.  Jeff Call, a 2002 graduate of the School and the APMP, passed away unexpectedly in 2006.  To honor Jeff’s contributions to the School and the APMP Advisory Board, together with Jeff’s parents, the groups established the Jeff Call Memorial Scholarship.  It is awarded annually to the senior who demonstrates the highest degree of commitment to APMP—a commitment Jeff displayed every day during his time at Michigan Tech.

James and Dolores Trethewey have established a new endowed professorship in Michigan Technological University’s School of Business and Economics.

With a $1.16 million gift commitment, the couple is underwriting the James and Dolores Trethewey APMP Professorship. The inaugural recipient is Associate Professor Dean Johnson, founding director of the Applied Portfolio Management Program.

The gift supports the hands-on, real-life investment program that Johnson launched in 1998 with the Tretheweys’ backing. Finance students manage an investment portfolio of approximately $1.2 million with funds provided by a number of donors through the Michigan Tech Fund.

“This is a great and unexpected honor,” Johnson said. “I already owe them so much. Jim and Dee’s support from the first day I proposed the APMP was key to its starting. And, they have also entrusted APMP students with managing their scholarship funds for years.”

Mr. Trethewey graduated from Michigan Tech in 1967 with a BS in Business Administration. He spent most of his professional career at Cleveland-Cliffs, now Cliffs Natural Resources, retiring in 2007 as senior vice president for business development. The family devised the professorship to promote the APMP, he said, but there are many reasons for their support of Michigan Tech.

“Or, is it the Tech culture, which is unique: hard work, ethics, creativity and intellect, all rolled into one? There’s an aura about Michigan Tech. It’s a special place.”

All those things matter, he said, but the impetus behind the Tretheweys’ giving can be summarized by two questions: 1. Did Michigan Tech improve your career and add to the standard of living of your entire family? 2. Do you have the desire and capability to give?

“The answer to both is a resounding yes,” said Trethewey. “Which leaves us with three more questions: How, when and how much?”

“When” is relatively easy. Tech is included in the Tretheweys’ estate plan, but they are also providing substantial annual cash gifts to support the APMP. “We wanted to see the fruits of our labors,” he explained.

“How” and “how much” are a little more complicated. “It’s like going into Walmart for a quart of milk and later coming out with $200 of packages,” he said. “We haven’t quite got our arms around our giving. I think we’re still mulling it around in the aisles of Walmart.”

Johnson is thrilled that the Tretheweys have pulled the APMP off the shelf. “It gives us a permanent source of funding,” he said. “I’d been scratching my chin, wondering how we were going to pay for student travel, with the stock market way down.”

APMP students travel for national investment competitions and, as top finishers, were once invited to open the New York Stock Exchange. Among their other destinations, they also visit the Chicago Mercantile Exchange and attend Warren Buffet’s Berkshire Hathaway annual meeting in Omaha, Neb.

“And we also give them scholarships,” Johnson said. “To fund all this has been a struggle, but now to have Dee and Jim recognize that need and meet it is just amazing.

“It’s also very humbling to have somebody recognize my dream and give it such incredible support,” Johnson added. “I’ve just been doing what I thought was the right thing to do: educate students.”

For the Tretheweys, that’s what their gift is all about. “When you pass through the halls of Michigan Tech, you come out with a first-class ticket to anywhere you want to go,” Trethewey said. “The route and the destination are up to the individual. And special programs like the APMP are examples of the tremendous role universities play in our society. We all have an obligation to help them.”

Trethewey is a member of the Michigan Tech Fund Board of Trustees, the Academy of Business and Economics, the APMP Advisory Board, and the School’s National Advisory Board.

This article was originally published on Michigan Tech News. 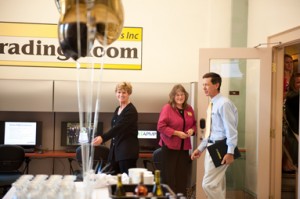 “A great program finally has an appropriate and wonderful home,” said Darrell Radson, dean of the School of Business and Economics. He was talking about the new LSGI Trading Room, which was dedicated Oct. 7. It will house the Applied Portfolio Management Program (APMP), and was made possible by the generosity of Joe ’76 and Vickey Dancy. Joe is president of LSGI Advisors Inc., a venture fund organization.

APMP, mostly comprised of finance majors, is the School’s long-time success story: winning three national competitions in just over a decade while allowing students to invest more than $1 million of real money in the stock market.

For Joe Dancy, the choice was easy.

“The unique thing about APMP is that the students have more responsibilities and decision-making than other similar programs,” he said. “They go to the national competitions and do so well against many other teams. The students are making all the decisions, and I love the diversity. We’ve had students from different countries, female members, and there have been volleyball, hockey, basketball, and football players.”

One such football player this year is Pat Carroll, wide receiver for the Huskies.

“The room is awesome,” he says. “We are lucky to have this place and get this great experience.”

Carroll transferred from Purdue because they didn’t have an APMP program. Besides being at the dedication, he had been busy prepping for his first Advisory Board meeting with Dancy and others later Thursday night.

“We have to pitch our idea,” he says. “We have to say why they should trust us with this money to manage, just like real life. We have to justify our strategy.” (“It was a little nerve-racking,” Carroll said the next day. “But we did pretty well and received a whole bunch of great criticism from the board members.”)

So, what’s new with the new room?

“The addition of Bloomberg TV gives our students the same advantages as industry professionals,” says Dean Johnson, associate professor of finance and the founder and advisor to APMP. “We are the only educational institution in the UP with these improved trading capabilities. In addition to investing, students can also use its job line. It is a job-matching feature on a private line.”

“We’ll be able to do more teamwork and use all our resources to become even more successful,” she said.

Joe Dancy, an avid supporter of Michigan Tech and the Applied Portfolio Management Program, has been featured in the Wall Street Journal discussing the benefits of teaching and establishing relationships.

His message, focused on getting involved, is important:

There are plenty of opportunities in high schools, community colleges and universities for advisers to become involved in academia. Working with a school at any level says to clients and other parties: “People are interested in hearing what I have to say.” It’s also a great opportunity to hear feedback on your work. You find out whether the issues you’re addressing are engaging and whether or not you’re able to effectively communicate them. And advisers are not limited to addressing business programs. You could speak to the members of a math department or law school or you could coach a stock market team.

Thanks Joe, for all of your support and many words of wisdom!

This article is republished from the LSGI April 2011 Advisors Report. Visit the LSGI Fund website.

We are pleased to announce that Michigan Technological University senior Annette Felton is the 2011 LSGI Scholarship award winner. The scholarship is awarded to a student who displays excellent academic achievement, expresses an interest in finance or applied mathematics, and demonstrates high moral and ethical characteristics.

This unique program is comprised of Michigan Tech finance students from various countries around the globe. Historical returns of the student managed APMP portfolio have exceeded the S&P 500 index. While the program is small (14 students this year), graduates of the program are
working across the globe for various financial institutions, money management firms, and hedge funds.

From a statistical standpoint, the students in the program have provided the portfolio with positive ‘alpha’ (excess returns) for the level of risk they have incurred. The students’ portfolio is managed as an ‘enhanced index’ portfolio, split between student selected exchange traded
funds, stocks, and bonds. This year, students have also developed strategies to effectively trade options which has enhanced the learning experience.

APMP students were recently interviewed by a local television station on the impact of global unrest on investment strategy and the markets, and were interviewed live by Bloomberg radio at the recent University of Dayton investment symposium.

Annette is the co-founder and Vice President of the MTU Finance Club and is an active member of the Dean’s Student Advisory Council. Last year as part of the APMP team she attended the Berkshire Hathaway annual shareholders meeting in Omaha and met Warren Buffett and Charles Munger. Graduating in Finance with a minor in International Business and the German language, she has an interest in foreign currency and cash management. She has been offered a position as a financial analyst from the global mining powerhouse ArcelorMittal.

In her free time she enjoys backpacking, volunteering at the humane society, water sports, and traveling both domestically and abroad. We are proud to have Annette Felton as the 2011 recipient of the LSGI Scholarship.

To learn more about the LSGI Fund, please visit their website.