Michigan Tech is mourning William G. “Bill”  Jackson, who passed away peacefully March 1, 2018, in Scottsdale, Arizona. Jackson graduated from Michigan Tech in 1958 with a BS in Electrical Engineering. His generosity is a perfect example of the impact a single individual can have. Jackson made multiple transformational gifts that continue to make a lasting and dramatic positive impact on campus.

Jackson’s first gift to Tech was made in July of 1973. He and his wife, Gloria, continued supporting the University with numerous gifts over the years. These gifts supported departments and initiatives including the Annual Fund, the Class of ’58 Endowed Scholarship, the Industrial Archeology Program and the Rozsa Center.

The couple made their first major gift when they established the William and Gloria Jackson Endowed Scholarship in 1998. This provided scholarships for undergraduate students majoring in electrical engineering, with preference given to graduates of Calumet High School, which provided Jackson, who remembered his roots, with a start in life that he continued to value.

In 2006 Jackson was presented with the Distinguished Alumni Award, the Alumni Board of Director’s highest honor, for his professional achievements, for being a model of the entrepreneurial spirit, for being a champion of higher education and for bringing distinction to Michigan Technological University.

And still Jackson continued giving. Another major gift, given with his late wife Gloria in 2007, established the William and Gloria Jackson Professorship Endowed Fund which focused on bridging information technology and entrepreneurship. The gift arose from Gloria’s strong belief in the power of endowments and Bill’s strong respect and appreciation of the the Department of Electrical and Computer Engineering. The generous gift both established and provided recruiting funds for the endowed professorship now held by Timothy Havens, associate professor in Electrical and Computer Engineering and Computer Science and director of the Data Sciences graduate program and ICC Center for Data Sciences.

Havens says the William and Gloria Jackson position is invaluable. “It provides funds for the Jackson Fellowship that I use to recruit exceptional graduate students. These students are able to work on higher risk/higher reward research, which is beneficial for both the student and also myself. Brian Flanagan, an accelerated master’s student, is the Jackson Fellow and is investigating how advanced data science can be used to predict maintenance in large fleets of vehicles.” This project has allowed Havens to build a new collaboration with Ford.

But Jackson wasn’t done yet. Another major gift made dramatic changes almost immediately and continues to support students and instructors. The William G. Jackson Center for Teaching and Learning, on the Van Pelt and Opie Library’s second floor, was constructed. It includes spaces and equipment for faculty training on new teaching methods and technologies including assessment, recorded lectures and the Canvas learning management system. Though novelties at the time, all now enjoy widespread, effective use in Michigan Tech classes, and more than half of Michigan Tech instructors connect with the Jackson CTL annually for training and support.

In 2013, Jackson’s gift established a secure testing center that allowed local administration of the fundamentals of engineering and other commercial exams as well as support for accommodated exams. Demand for the use of this center has grown exponentially resulting in a summer 2016 expansion (also supported by the gift). In its first fall semester, about 70 exams were administered; today, it’s not uncommon for the center to give that number in a single day, with semester totals approaching 3,000.

Jackson’s gift helped to install lecture-capture capabilities in 20 University classrooms, another trend that has continued to grow. (There are now 38). During fall 2017, more than 5,000 hours of video was reviewed by students, with captures in over 100 different sections. The Jackson gift has provided much needed technology upgrades in several university classrooms, and fully supported the creation of the 60-seat Jackson Active Learning Center in the basement of Rekhi Hall which is tailored to the blended-learning classroom model.

Jackson believed the most important impact were the opportunities his gifts created for people. In addition to providing initial full support of the testing center coordinator position, the gift has funded more than 20 blended learning and online curriculum development grants for instructors in almost all Michigan Tech departments. His gift provided the basis for an equipment loan program, and the impetus to begin a program that helps instructors learn how to teach online.

When Jackson visited campus in July, 2014 to celebrate the opening of the Center that bore his name, Director Mike Meyer was especially struck by his humility, his desire to make a lasting difference and his people focus.

“Bill brought two of his grandchildren along to the open house event,” Meyer says. “It was clear that his family was of paramount importance to him, and he wanted the kids to see the Center and understand his legacy. After a tour of both the CTL and the Testing Center his gift had created and a chance to visit with many of the instructors supported through grants, I tried to thank Jackson formally for his gift. Bill’s humble response? ‘It’s just great to have good people to put the money to work.’”

Bill Jackson and his family can rest assured Michigan Tech will continue to treasure his legacy. His transformational gifts will help students and instructors at Michigan Tech for many years to come. 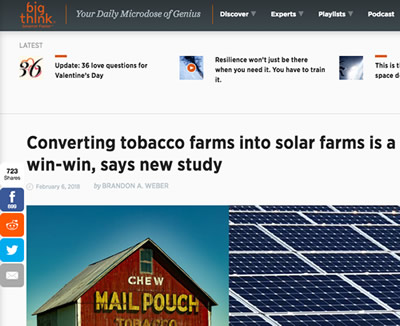 HOUGHTON, Mich. (WLUC) – Michigan Tech was packed with students and business alike as they hosted their annual Fall Career Fair.

More than 350 companies from across the country were recruiting engineers from Michigan Tech University Wednesday. Hundreds of them were from lower Michigan or other parts of the Midwest.

“It was my first choice to come here. I was so happy when I was accepted,” said Bioengineer Student Alex Undlin. “This is well-known as one of the best engineering schools in the country.”

I would not trade my experience here for anything. Alex Undlin

Read more and watch the video at TV6 FOX UP, by Eric DoBroka.

“Today, we have 340 recruiting organization, over 1,100 recruiters and students are here in troves. Here at Michigan Tech, we are a STEM-focused university, so these companies are looking for students in science, technology, engineering and math,” said Assistant Director for Experimential Learning & Career Development Kirsti Arko.

Read more and watch the video at ABC 10 News, by Lee Snitz.

Infinity Machine and Engineering was looking for jobs including electrical and mechanical engineers, programmers and service technicians.

The following outstanding alumni and friends will be recognized at the Alumni Reunion Awards Dinner on campus August 4, 2017:

Board of Control Silver Medal: Presented to persons who, through personal and professional achievement, are outstanding examples to Michigan Tech’s more recent graduates

Alumni Board of Director Awards

Outstanding Young Alumni Award: Presented to alumni under the age of 35 who have distinguished themselves in their careers. The award recognizes the achievement of a position or some distinction noteworthy for one so recently graduated.

Outstanding Service Award: Presented to alumni and friends making significant contributions to the success of the Association and/or the University

Distinguished Alumni Award: This award recognizes alumni who have made outstanding contributions both in their careers and to Michigan Tech over a number of years.

Humanitarian Awards: Presented to those alumni and friends who, through their outstanding involvement and dedication, have made a significant contribution of volunteer leadership or service which has improved or enriched the lives of others and the welfare of humanity, and whose accomplishments reflect admirably on or bring honor to their Alma Mater

Honorary Alumni Award: This award honors individuals who have provided service and support of the university characteristic of dedicated alumni. The Association reserves this award to recognize the strongest non-alumni supporters of Michigan Tech. 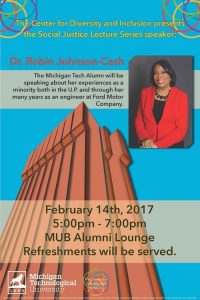 Johnson-Cash, the first African-American woman to earn a PhD from the Department of Mechanical Engineering, Engineering Mechanics (MMEM), offered some insightful advice to the students who were present for her talk.

First, recognize your gift. You have a unique talent that is unmistakeable. —Robin Johnson-Cash

Read more at the Daily Mining Gazette, by Graham Jaehnig.

Robin Johnson-Cash Will Be a Social Justice Speaker

The Center for Diversity and Inclusion has announced the seven speakers for their Social Justice Lecture series.

Among the speakers is the first African-American woman to graduate with a PhD from Michigan Tech’s Mechanical Engineering-Engineering Mechanics Department.  She will return to Houghton to lecture at 5:30 p.m. Feb. 14, 2017, in the Memorial Union Alumni Lounge.

Robin Johnson-Cash will speak about her experiences as a minority engineer at the Ford Motor Company. Her appearance at Michigan Tech is part of the University’s observance of Black History Month.

All of the events are free and open to the public.  For more information, contact Zack Rubinstein or visit the CDI Facebook Page.

Read more at Tech Today, by the Center for Diversity and Inclusion.