The Pavlis Honors College is looking for undergraduate and graduate students interested in becoming agents of change to become University Innovation Fellows (http://universityinnovationfellows.org/) and work on improving the innovation and entrepreneurial ecosystem here at Michigan Tech. The college will be sponsoring 4 students to become Fellows during the Fall 2016 semester. We are looking for creative, action-oriented students who are passionate and excited about innovation and entrepreneurship. Please forward this on to any students who may be interested. We appreciate all of your help in finding awesome students for this opportunity!

The application can be found here: http://goo.gl/forms/N6zQwMHDVr We will be accepting applications until Friday, April 15th at 11:59pm.

The University Innovation Fellows is a 6-week training program administered by Stanford University’s d.school (a commitment equivalent to a 1-2 credit class at Michigan Tech). Through the fellowship, undergraduate and graduate students from across the nation are charged with cultivating a culture of innovation and entrepreneurship at their university. Fellows gain skills, tools and the networks crucial for their mission through online training and video-conferencing sessions. Fellows hone their leadership and communication skills and broaden their understanding of experiential learning, design thinking, interdisciplinary education and, most importantly, student innovation and entrepreneurship.

Upon completion of training, fellows are invited to attend a 4-day retreat at Stanford University and Google. The fellowship is an opportunity to enact meaningful change while being part of a national movement. Current fellows at Michigan Tech have been working on many exciting initiatives (for examples, see the following links, here and here) and can’t wait to have your help in creating the future on our campus.

The scholarship for students pursuing undergraduate degrees in Scientific and Technical Communications (STC) or Business and Economics is funded by Dr. Robert D. Carnahan, class of 1953. Key responsibilities of a scholarship-winning STC major include public relations and reporting for her enterprise team.

The Department of Humanities and the Van Pelt and Opie Library are hosting a cartoon exhibition, Drawing Freely, in the library entrance. The Institut Français and Courrier International present this exhibition on freedom of expression as embodied by fifty press cartoonists from all around the world. Some of the themes treated by the cartoonists are: women’s voices, racism, corruption, dangers online, the new rebels, Charlie Hebdo, etc. 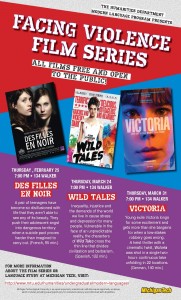 All Films Free and Open to the Public!

Thursday, February 25
7:00 pm, 134 Walker
A pair of teenager have become so disillusioned with life that they aren’t able to see any of its beauty. They push their adolescent angst into dangerous territory when a suicide pact proves harder than imagined to carry out. (French, 85 min.)

Thursday, March 24
7:00 pm, 134 Walker
Inequality, injustice and the demands of the world we live in cause stress and depression for many people. Vulnerable in the face of an unpredictable reality, the characters of Wild Tales cross the think line that divides civilization and barbarism. (Spanish, 122 min.)

Thursday, March 31
7:00 pm, 134 Walker
Young exile Victoria longs for some excitement and gets more than she bargains for when a low-stakes robbery goes wrong. A heist thriller with a cinematic twist, Victoria was shot in a single two-hour+ continuous take unfolding in 22 locations. (German, 140 min.)

Jordan Dagenais, an STC major, has been selected as the 2016-17 Humanities Department Scholar. He  and other departmental scholars will be recognized at the 2016 Student Leadership Awards, to be held on Friday April 15, 2016, from 6:00 – 8:00 PM in the MUB Ballroom.