Guest artist Sarah Hewitt, will give a special lecture,  The Rise of the Feminine: SHE VOWS, tonight at 5:00pm in the Rozsa lower level. Hewitt’s exhibit, “Flats and Rounds,” is on display in the Rozsa A-Space Gallery through Nov. 18. In this lecture (free and open to the public), Hewitt will talk about her work and her influences, her use of unusual materials, and how weaving is connected to past and future traditions. This lecture is presented as part of the VanEvera Distinguished Lecture Series. 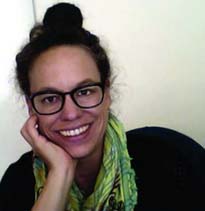 Sarah Hewitt lives between New York and Maine. Her work has been exhibited throughout the country. Recent exhibitions include Kindred Beasts at the Everson Museum, and Accidents into Incidents at Momenta Art. Hewitt has received awards and residencies from the Skowhegan School of Painting and Sculpture, Vermont Studio Center, Purchase College/SUNY, Quimby Colony and Haystack Mountain School of Crafts. She was recently nominated for a Joan Mitchell Painters and Sculptors Grant.

Strand will discuss her book “The Brothers Vonnegut,” which tells the unbelievable story of GE’s Co 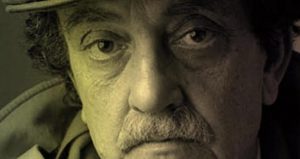 ld War project to take control of the weather, and how it shaped a young aspiring writer named Kurt Vonnegut.

Set at the dawn of the computer era, in a nation beset by atomic anxiety, the story of Kurt and his scientist brother Bernard demonstrates the powerful connections between science and art.

Strand will discuss Nobel Laureate Irving Langmuir’s unresolved meteorological experiments, Bernard Vonnegut’s misgivings about them and Kurt Vonnegut’s use of all of it to write some of the most inventive novels about science ever produced—books that raise questions about scientific ethics that remain just as pressing today.

A book signing and reception will follow the talk. Books will be available for purchase at the signing and at the campus bookstore. This special event is co-sponsored/funded by the Visiting Women and Minority Lecturer/Scholar Series (VWMLSS) which is funded by a grant to the Office of Institutional Equity and Inclusion from the State of Michigan’s King-Chavez-Parks Initiative and EPSSI (The Earth, Planetary and Space Sciences Institute). It is also sponsored by EPSSI and the Departments of Humanities and Social Sciences. 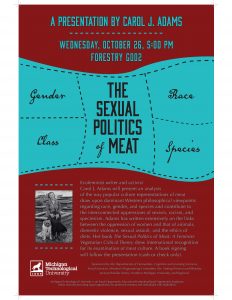 Ecofeminist writer and activist Carol Adams will give a talk, “The Sexual Politics of Meat,” on Wed. Oct 26, 5 pm, Forestry G002. Free to the public. Vegan food will be served. Click on the flyer for more info. 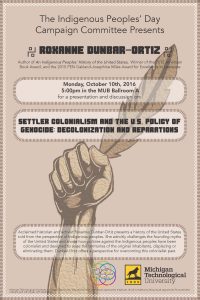 Historian Roxanne Dunbar-Ortiz will speak here next Monday, Oct 10th at the MUB Ballroom A at 5:00pm. She is the author of “An Indigenous Peoples’ History of the United States,” and winner of the 2015 American Book Award. Her talk is entitled: Settler Colonialism and the U.S. Policy of Genocide: Decolonization and Reparations.

Free Lecture: “What Will Election 2016 Mean to Your Future”

Derek Thompson, Sr. Editor of The Atlantic, to Speak at the Rozsa on educational, economic and political topics in his lecture “What Will Election 2016 Mean to Your Future” at 7:30 p.m. Wednesday (Oct. 5).

Derek Thompson is a senior editor for The Atlantic magazine and the author of its 2015 cover story “A World Without Work” about the future of technology and employment. He also writes the business column for the magazine and contributes to the website on issues ranging from behavioral psychology to the economics of entertainment. Thompson is a weekly contributor to “Here and Now,” the national afternoon news show on NPR, and he appears regularly on CBS and MSNBC. He has served as an adjunct professor at the Columbia Journalism School. He has appeared on numerous lists, including Folio’s “15 Under 30 in Media.” Thompson is currently working on his first book about the science of hits in pop culture.

This lecture is free, open to the public and is part of the Van Evera Distinguished Lecture Series, presented with support from WGGL, Minnesota Public Radio.

This will be an opportunity to talk to faculty and advisors in many different departments on campus about the academic minors they offer.
Continue Reading →

A Conversation on Race, Reconciliation and Healing 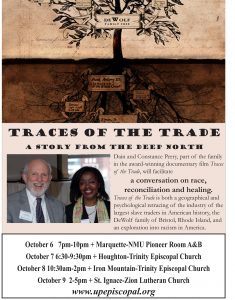 Dain and Constance Perry, he, the descendant of slave owners and she, the descendant of slaves, will present the award-winning documentary, Traces of the Trade:  A Story From The Deep North  (2008 Sundance Film Festival) and facilitate a discussion with audience members about the lessons of the film.  The Perrys create an atmosphere of safety and openness that cuts through fears of judgment, of giving offense, or of being misunderstood that often inhibit discussion of race.  This documentary is a geographical and psychological retracing of the industry of the largest slave traders in American history, the DeWolf family of Bristol, Rhode Island (Dain’s family), and an exploration into racism in America, a legacy of slavery that continues to negatively impact the country today, even in the U.P. 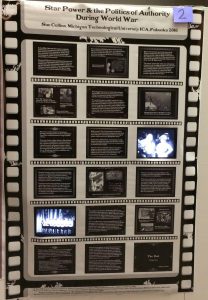 Sue Collins presented her poster, “Star Power & the Politics of Authority During World War” in June at the International Communication Association’s annual conference held in Fukuoka, Japan. Using two ipads, her poster included film footage of both wars’ bond drives featuring Hollywood stars. As a scholar interested in war, she also traveled to Nagasaki and Hiroshima where she visited each city’s war museum and memorials.

By scollins
Resumes are the heart of a strong professional portfolio and should be shaped toward their intended audience. Whether refining an already strong resume or drafting a completely new one, this resume workshop will help you discover the necessary concepts for professional document success.
When: Saturday, September 24 at 1:00 pm to 2:00 pm
Where: Multiliteracies Center, Walker 107 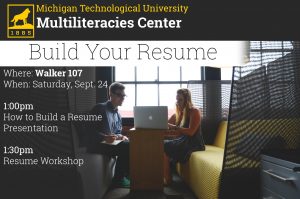 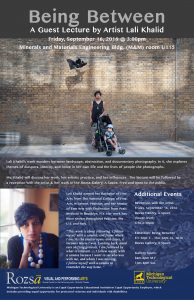