This post was originally published in the Business Operations Blog. It was written by Ann Kitalong-Will, the executive director of business operations here at Michigan Tech. 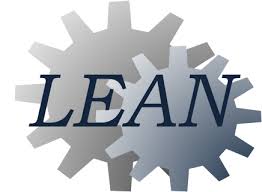 Sometimes continuous improvement results can take some time to materialize. But it’s important to remember to focus on the goals you’re trying to accomplish, and to trust that lean process improvement methods can and do result in reaching the tangible goals that we have in our work.

In 2012, as part of a grant Michigan Tech received through the Federal Mediation and Conciliation Service, we were able to bring consultants to campus to help us continue on our lean journey as a University. Our grant application had proposed an innovative approach to enhancing relations between management and union-represented staff via a rigorous series of Lean training sessions. Lean as a management method is particulary well-suited to accomplishing such a goal, because it is an approach that focuses on the value of each employee, at all levels and within all units. We believed that our proposal would contribute to improving communication and relations between employees at all levels across campus.

I was a co-PI on this grant and participated as a “student” in most of the training sessions. One of the exercises we were asked to do was to facilitate a kaizen(“improvement”) event to solve a challenging process issue in our work. Having recently taken on policy administration at the University, I had become aware of many areas within the policy development process that seemed to cause confusion for customers (policy developers) and for the campus community in general.

We assembled a small group of individuals that included me, and 3 or 4 additional people who served as facilitators, subject matter experts, and customers. From this single kaizen event, we were able to identify some key improvements that needed to happen:

Most of these goals hinged on the need to hire that staff member. I am now pleased to say that in 2014, after a lot of thought and planning, we were able to hire a University Policy Coordinator, Lori Weir, who has jumped right in to making these kaizen-originated goals a reality. She is also constantly looking for ways to continuously improve how we manage policies at Michigan Tech, and I’m looking forward to working with her to realize our vision of what a Policy Office should be.

Most people practicing Lean know 5S–Sort, Set, Shine, Standardize and Sustain–and they know it can be applied to many things. Here at Michigan Tech we have applied this thinking to shared network storage spaces. I have now facilitated 4 of these events.

At the first one I facilitated, I obediently followed what I was taught and started with Sort. We went through all the files and worked on deleting the garbage. For Set, we worked on putting the remaining files into a logical order and making things easier to find.  Shine involved going back through the files (again) and renaming them consistently. When we came to the Standardize step it basically turned into documenting what we had spent a lot of time doing–what should be kept, for how long, where to store things, and naming conventions. Finally, the Sustain phase, including setting up regular audit schedules and procedures for making sure the drive stayed neat and organized.

In the end we did leave with a well-organized, easier to navigate shared drive, but the process itself was frustrating and extremely long. The team spent an inordinate amount of time during the Sort and Set phases strongly “discussing” whether a specific file should be kept or deleted and what folder it should be in. We also did think of metrics, kind of. We looked at the overall size of the share and, in the end, did make it smaller. But if you are only measuring the size of the share and your goal is to minimize it, then the simple answer to achieve perfection of that measurement is to just delete everything and use zero GB, right?

Around that time, I read an article, “5S Shakeup” by John Casey on the Quality Progress website, and had a revelation–perhaps we should be starting with the 4th S instead. On my next network drive 5S event I was able to try this out. We started by creating the standards document. I began this discussion off with one simple question–what is the purpose of this drive? We talked in general about what should be kept at all, how long to keep files, and how to name them. This completely focused the whole event and eliminated the extended discussions on specific items. The Sort, Set, and Shine could all be done in one pass through because the rules were already defined, and these steps were split up and done as homework instead of in a big group. The individuals returned to the next meeting with just a few files they were uncertain about, and the group made decisions on their disposition together.

I also worked on the metrics. At the pre-meeting with the team leader, we dug more into why they wanted to attack this problem. This helped to identify various metrics that would actually measure what they needed them to. If the why was because new staff can’t find things easily, we did several before and after time tests to see how long it took to find various files.  If the problem involved just too much stuff, we still looked at the overall size, keeping in mind that zero is not really the goal, but more like reduce and then maintain that reduced size. We looked at the number of root folders, total number of folders and total number of files.

This event went much smoother, and I heard a lot of comments from the team members that they really enjoyed the experience.  When another campus facilitator was slated to do one of these events she asked me for some tips as she knew I had done a few, so that prompted me to write some Best Practices, which I have made available here: Network Drive 5S Best Practices January 2014.

Change is on the Way!

Often times you can’t help but overhear conversations between your fellow classmates, and regularly the topics of interest revolve around two things–how tough our winters are, and how bad our dining halls are. This unfortunate perception held by some students has sparked a flurry of improvement events currently being held on campus. The one I would like to highlight is the Residential Dining Blueprint kaizen that was conducted this week.

The cries have been heard and the dining hall managers spent 12 long hours over the course of three days creating a blueprint for “what makes an awesome dining hall.” As a student playing the “customer” role on the kaizen team it was very refreshing  to see just how much each and every manager is devoted to improving the residential dining experience. In creating the blueprint the team took advantage of a great organizational tool: the Fishbone diagram (click on the diagram to enlarge it). 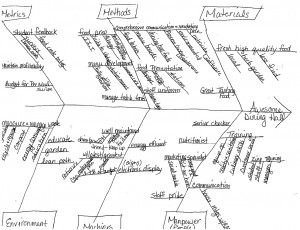 The dining hall managers and staff definitely have their work cut out for them, but that isn’t going to stop them in their pursuit of creating the greatest possible dining experience. I look forward to seeing the improvements in the coming years.

Today we bid a fond farewell to Megan Johnson. Megan has been a student Process Improvement Coordinator in the Office of Continuous Improvement for 3 years. In that time, she was involved with dozens of Kaizen Events, both as a coordinator and as a facilitator.

Megan recently graduated from Michigan Tech with a degree in Biomedical Engineering. She’s taking a position with a global manufacturing company as a Value Stream Team Leader. A value stream is the series of events and the information flow required to transform a customer request into a good or service. Value streams generally cross production lines and departmental boundaries; they have an enterprise focus rather than a functional focus. Megan credits the skills she developed as a student Process Improvement Coordinator and as the president of the Leaders in Continuous Improvement (LCI) student organization with giving her the competitive edge during her job search.

Megan sends her thanks to all of the wonderful continuous improvement facilitators and team leaders that she’s worked with.

Summer is a Perfect Time for Improvements!

Classes are over and the snow is melting, which can only mean one thing…Summer! The return of Summer means longer nights, vacations, and opportunities for improvements! 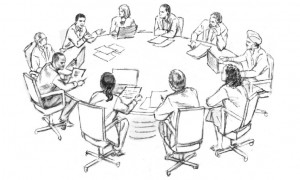 The Office of Continuous Improvement encourages you and your department to engage in small group discussion and talk about continuous improvement opportunities. It doesn’t take much; just a few minutes to exchange ideas and possible improvements for your area. There are plenty of lean facilitators on campus who are ready and willing to help. If you have any questions or would like to schedule an improvement event, please contact us at improvement-l@mtu.edu or call 906-487-3180.