Just shake it! in Nanowerk 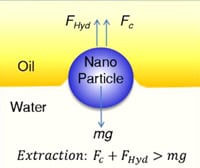 The team demonstrated that water contaminated with nanomaterials can be cleaned up by a ‘hand shaking’ approach that can be performed even in a kitchen.

Just shake it! A simple way to remove nanomaterial pollutants from water

“In our new work, we have demonstrated that water contaminated with nanomaterials can be cleaned up by a ‘hand shaking’ approach that can be performed even in a kitchen.” Dr. Yoke Khin Yap, a professor in the Department of Physics at Michigan Technological University, tells Nanowerk. “Our approach is simple and universal, and can be used for many one-dimensional (1D) and two-dimensional (2D) nanomaterials including nanotubes, nanowires, graphene, and nanosheets. Therefore, our approach would support continue development of nanotechnology by reducing the risk of water contamination.”

I wish I could take every one of my physics students for a walk through the halls and rooms at the annual meeting of the APS Division of Fluid Dynamics. Maybe the best time would be right after their first advanced course in classical mechanics. I would exclaim, “Look, you’ve only just begun, there is so much more!” The meeting is a veritable carnival of physicists…

Read more at the American Journal of Physics.

Yoke Khin Yap (Physics) was awarded by Osaka University in Japan with the title of Global Alumni Fellow. The newly established award is granted to alumni who are academically active overseas. Yap is among the first few honorees joining alumni from Purdue, Pennsylvania, Columbia, The National Institute of Health, Roswell Park Cancer Institute, Cambridge and others.

Yap has been an active alumni of Osaka University. He is one of the founding members and board of directors of the Osaka University North American Alumni Association (OU-NAAA) created in January 2006. OU-NAAA helps alumni in North America connect with the university, students and faculty through social and academic networking activities.

The work of Yap and collaborators has also been highlighted in Nanowerk, Scicasts, Electronics Weekly, EE Times, IEEE Spectrum, KurzweilAl, Sciencedaily, phys.org, EurekAlert and numerous others.

The Almetric system (social attention of a scholarly article) ranks Yap’s paper in the 97th percentile of all tracked articles of a similar age in all journals.

Jaszczak Invited to Write a Viewpoint

John A. Jaszczak (Physics) was invited to write a Viewpoint about a new paper published in Physical Review Letters about important experimental work on the growth of quasicrystals. His article, “Viewpoint: Watching Quasicrystals Grow,” discusses exciting new work that images–at the atomic scale–the growth of an alloy that exhibits crytsallographically forbidden symmetry, but whose structure can be modeled using the famous, non-periodic Penrose tilings. Viewpoints are editor-invited commentaries written by experts in their field about research articles published in American Physical Society journals, and appear in the online-only news site Physics.

From Tech Today, by John Jaszczak.

Ramy El-Ganainy, (Physics) is the recipient of a $99,527 research and development grant from the National Science Foundation. The two-year project is EAGER: Dynamic Characteristics of Electrically Pumped PT Symmetric Lasers.