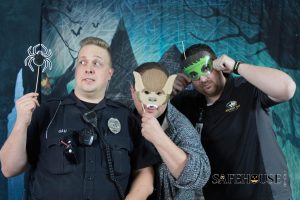 Safehouse, the annual trick-or-treat haunted house in the residence halls, has been a Tech tradition since 1988. Did you help? Share your story.

Pasties, Taco Bell, Starbucks: Where did you travel for food as a student?

If there’s something you take seriously in college, it’s food. Whether it’s driving to Marquette to get some Buffalo Wild Wings or strategically planning a day around which presentations or campus orgs are offering free meals, you don’t get between a college student and food. At Michigan Tech, sometimes that meal takes on a special local flavor. You’ve seen them around town; you’ve eaten them at your desk, on the beach, or maybe even in the dining halls. How much do you really know, though, about the famous pasty?

A good old song from the English region of Cornwall proclaims, “There’s something about a pasty that is fine, fine, fine!” Huskies and friends know the truth of those words. The delicious dish nourishes the body and warms the spirit with its blend of meat, potatoes, and rutabaga, all nestled inside a flaky crust. It’s the kind of meal that gets you ready for a day of cross-country skiing on the Tech Trails or a hike up Mount Baldy. Nothing is quite like the smell of a pasty baking; nothing tastes quite like that first bite. But how did a meal synonymous with Cornwall become a staple of the Upper Peninsula?

Let’s take a quick peek back into history to answer that question. Cornwall’s long track record with copper and tin mining led the rest of Great Britain to remark wryly, “Wherever you find a hole in the ground, you’ll find a Cornishman at the bottom of it.” Life in the mines of England often meant low wages and back-breaking labor, but it also cultivated a skill and knowledge of the work that made the Cornish miners a gold standard. When Michigan’s copper mines–the very ones whose ruins now lie in Houghton, Keweenaw, and Ontonagon counties–were first being opened for industry, their founders looked to Cornwall for able laborers, and the people of Cornwall, whose mines were tapering off, looked to Michigan for a new hope. One scholarly article on the history of the pasty noted that twenty Cornishmen were already at work in the Copper Country in 1844, just one year after industrial mining began here. With them came their favorite workday meal, which was subsequently adopted en masse by colleagues of all backgrounds.

We don’t know for certain who invented this tasty pocket of joy, which has seen considerable changes over the years, but we do understand why it was so appealing to the men who worked in the mines and the women who prepared their dinners each day. The pasty’s hearty fillings can be prepared in a large batch and energize a person for a day of hard work; the meal can be held in the hand and eaten without utensils; and it’s easy, relatively speaking, for a miner to reheat a pasty over his candle far underground. By the time the mines of Michigan closed, the pasty had become a staple that the Copper Country was determined to keep. Nowadays, you’ll find them around the local lunch table, sold at community fundraisers, eaten at picnics by the shores of Lake Superior, or on parade at places like Calumet’s annual Pasty Fest.

Let’s raise a pasty toast to the Cornish who brought us a meal worth celebrating!

What food brings you back to your college days? Was a special meal in particular that you drove to Marquette (or further!) to enjoy? Who makes the best pasties in the UP? And, do you like ketchup or gravy with your pasty?

What you said…in October about Tech!

Just curious—my grandmother Sylvia Combellack used to feed boys from Tech. She lived in the red house on the corner of Houghton Avenue and Garnet. She cooked for boys from 1945-1986. I was wondering if anyone had a family member eat there. –Debbie

“Yes I did. 80 through 83. Great food. Turkey meal and steak meal once a quarter. She told us a story about some foreign students who told her they didn’t like her soup because it was too rich. She said what soup, we had gravy. –Frank L.

I tried my hand at a vegan pasty. Does anyone remember Funky’s Karma Cafe or Conscious Stomach at MTU? Anyone remember Marie’s Deli in Houghton? It was where I first tasted hummus and falafel. Marie remembered all of us MTU grads when we visited her Grand Rapids restaurant. Her son is writing a cookbook and is looking for photos of her days in Houghton if you have any to share. –Cynthia H.

“I remember meeting her during orientation at Tech. A group of us from my high school class were walking across the bridge and we met Marie. She stopped and talked to us for about 10 minutes and then told us to come to her deli. We did go and I went with other groups of friends off and on but she always remembered who I was and when we met. Marie’s Deli had the best food! –Anne C.

“The hummus and Turkish coffee! I doubt I have any pictures and if I did they’re in a shoe box somewhere!” –Stacey K.

“I don’t have any pictures but I remember her deli fondly. I lived above the Lode and had many delicious cheesecakes over the years! I would totally recognize her if I saw her in person. She left a huge impression in my years at Tech.” –Dino F.

“Went on my first real date with Mike Simon at Marie’s, and 27 years later we still remember her and our meals at her restaurant fondly. Her son was sometimes there with her, such a cute little guy! Wish I had thought to take a photo at the time. –Beth S. 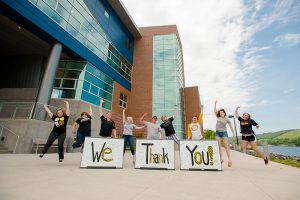