“Darwin was a very special Alumni Board member whose passion for Michigan Tech could not be contained. He has left his Husky paw print on our hearts, as well as on the University” says Kristin Kolodge, President of the Alumni Board of Directors.

The full obituary for Darwin follows.

Darwin G. Moon was born to Leslie C. and Betty Lou Moon on May 28, 1957, in Ann Arbor, Michigan.  In his youth, Darwin was an active member of the Boy Scouts of America and earned the rank of Eagle Scout, the highest advancement rank in Scouting.

Darwin started working at the Air Force Rocket Propulsion Laboratory at Edwards AFB, California in 1980. He went on to work at McDonnell Douglas in Southern California and The Boeing Company for 27 years, most recently in Huntsville, Alabama, where he was a project manager on the Space Launch System.

After a brief battle with pancreatic cancer, Darwin passed away on March 16, 2022.  He is survived by his wife of 37 years, Margarita; sister, Karen (Mark) Vylonis; niece, Megan (Sean) Vylonis-Nelson; two nephews, Derrek Vylonis and Corey Vylonis; and numerous cousins.  Darwin is predeceased by his parents.

Bill (Dr Wilbur H) Campbell died unexpectedly at home early on January 30, 2022.  He was born in 1945 in Santa Ana, California, and earned his PhD in Biochemistry from UW Madison in (1972). A series of post-doctoral positions in different parts of the country led to a faculty appointment in the Department of Chemistry at the State University of New York College of Environmental Science & Technology. He met and married Ellen in Syracuse in 1981, and they moved to the Keweenaw in 1985 when he became the biochemistry professor at Michigan Tech.

In 1993, the Campbells decided to try to bring the discoveries of Bill’s academic research out into the world with new products for testing water quality. NECi, in Lake Linden, was one of the first biotech companies in Michigan. NECi’s products for nitrate testing won USEPA method approval in 2017. They are made in Lake Linden and sold to customers worldwide.

Bill’s step-daughter Lisa Carne works on coral restoration in Belize.  His brother’s family are settled downstate, from Detroit to Ann Arbor.  Sister Jeanette Merki and family are in Kirkland, Washington.

Bill loved trees, birds, wildlife, cats, bears, and peace.  The beauty of the area kept the Campbells here in the UP, despite the winters.

M. Sean Clancey, 66, a resident of Calumet passed away on Monday February 21, 2022 at Aspirus Keweenaw Hospital in Laurium.

He was born on August 20, 1955 in Ishpeming to James and Barbara (Stakel) Clancey. When he arrived home, his two older brothers, ages 2 & 3 – having recently witnessed the birth of a litter of Boxer puppies – were unimpressed, asking “Where are the rest?”. He graduated from Ishpeming High School with the Class of 1973, having focused not only on the English language, but also delving into German and French. His great interest in languages culminated in a highly rewarding trip to Europe, where he was able to focus his attention on the nuances of regional dialects in London and Paris. He was also surprised to learn that a student his age could even enjoy an occasional sip of wine or ale. His earnest studies empowered him to perform exquisite Shakespearian orations and even pull off an unforgettable onstage impression of Joe Cocker while competing in an air guitar contest under the lights at the Champion Horse Pulling Grounds during Beer Fest. One former high school teacher recalls giving him the assignment to write an essay about an inanimate object, using its perspective and point of view. Sean chose Richard Nixon’s wastebasket as the subject of his report.

Following high school Sean attended St. Norbert University, and then moved on to receive his Bachelor of Science degree in Journalism from Marquette University. He next attended Michigan Technological University where he received his Masters and PhD in Rhetoric and Technical Communications. We believe he was the only MTU Masters candidate to ever illustrate a thesis point by juggling three balls during his defense.

Sean’s first job after Marquette was for the Marinette Eagle Herald newspaper, where he worked the Peshtigo beat. After obtaining his PhD, he became a Lecturer at Michigan Tech in 1998. He taught there until his retirement in 2019. He was a multi-year finalist in the Academy of Teaching Excellence and won the MTU Distinguished Teaching award in 2009.

Sean was known by the nicknames “Otto” and “Doc”. Otto came from his high school German class, and Doc came from his skills on the volleyball court. He was an accomplished volleyball player, playing in tournaments across the UP, and earning a DSV (Doctor of Surgical Volleyball) degree awarded by his contemporaries. Another of Sean’s hobbies was golf – encompassing the links, frisbee, and computer versions. He was devoted to the Green Bay Packers (purchasing share number 029474 in 1997) and attended many memorable games at Lambeau Field. Doc was fortunate to be at Marquette University when the Warriors won the national championship under legendary coach Al McGuire in 1977. The Michigan Wolverines also held a special spot in his heart, his Grandfather having been the Student Assistant to Fielding Yost in 1908.

For over a decade, his summer was highlighted by a trip to the Great Northern Bluegrass Festival at Mole Lake, Wisconsin. Nothing pleased the Doc more than peacefully relaxing to music in the Chequamegon Forest with friends. Coming on the heels of that “relaxation”, he always relished the annual August canoe camping trips in the Keweenaw at Bete Gris on Lake Superior (at arguably the world’s most outstanding campsite) with a close circle of friends. For over 25 years, he made that trek and kept close tabs on the veracity of pronouncements at the well-stocked bar. No B.S. ever went unchallenged with The Good Doctor on hand.

Sean was extremely generous with his time. He served on the Board of Trustees for the Copper Range Historical Society and regularly welcomed visitors to their Museum in South Range. He would never pass up the opportunity to deliver meals for the Little Brothers Friends of the Elderly, sacrificing many holidays with his family so that he could help make those days extra special for elderly residents of the Copper Country. In addition, he served as Faculty Advisor to the Delta Upsilon Fraternity at MTU, providing much appreciated guidance for many years.

Sean was a staunch Progressive and tireless crusader for worthy causes. His knock was heard at many a Keweenaw door. He carried signs, gathered signatures, and handed out countless pamphlets while always being well prepared to calmly explain his positions on those issues. He truly Felt the Bern!

Sean always enjoyed a large circle of friends, who treasured his quick wit and easy smile. He was happiest when surrounded by friends and engaged in conversation.

He is preceded in death by his parents, and his beloved dog Luke. He is survived by his brothers: Pat (Diane) Clancey of Green Bay, Wisconsin, Jay (former spouse Mary Windsand) Clancey of Lake Michigamme, Tom Clancey of Tampa, Florida, and special niece Brooke (Joe) Routhier of Ishpeming.

Robert A. Fricke, 99, a resident of Hurontown and the Bluffs Senior Living Community in Houghton passed away Sunday, January 23, 2022, at the UP Health Systems Portage Hospital, in Hancock.

He was born on March 18, 1922, in Hurontown, MI, a son of the late August E. and Ethel M. (Martin) Fricke. Bob was raised in Hurontown, and was a graduate of Houghton High School with the class of 1939. He then attended Michigan Technological University before enlisting in the United States Army Air Force from 1946 to 1948. He then returned to Michigan Technological University, to receive his degrees in Mechanical and Electrical Engineering.

On January 6, 1951, he was united in marriage to the former Dorothea Tetzlaff. The couple moved to different parts of the country during Robert’s working career such as the Local Radar Base in Keweenaw County, Zeeland, MI as City Engineer, Milwaukee, WI and Los Angeles for eight years, while he worked for Rex Chainbelt, then in Cleveland, OH, while he worked for Master Builder and later Union Carbide, in Ashtabula OH. He returned to make his home in Hurontown, when he accepted a faculty position at Michigan Technological University, retiring in 1987.

Locally, Mr. Fricke was a member of Grace United Methodist Church of Houghton. Robert’s life of helping and giving began at an early age when he became an Eagle Scout and continued throughout his life. Locally he was active on many boards and committees with Portage Township, was a former Secretary for Rangers Post #6165 VFW of South Range, the Hancock Lions Club, where he helped begin the handicap ramp project and the Copper Country Kiwanis Club, as well as a former Boy Scout Leader. Mr. Fricke was a 33rd Degree Mason and an active member of Copper Country Lodge #135 F&AM. He was very proud to have received the Masonic Lou B. Winsor Award in 2001, from the Grand Lodge of Michigan.

Stephen George Shetron, 87, of Traverse City, Michigan, passed away on January 5, 2022 after a short illness.

Steve grew up in White Plains, NY. He was a lifelong learner, with degrees from Alfred State (NY), Michigan State, and U of M. He was a professor in Soils Science at Michigan Tech for 30 years, enjoying his teaching and research in mine tailing reclamation. He and his wife Ruth raised their daughters, Becky and Lynne, in Alberta and L’Anse, Michigan. Their family time was full of such experiences as maple sugaring, fishing, cross country skiing, camping and summer weekends at their cottage on Beaufort Lake. Later in his career, Steve and Ruth lived in Houghton.

Throughout his adult life he was active in the United Methodist church and even after moving away maintained a special interest in the L’Anse church. His church home in Traverse City was the First Reformed Church. He was also an active volunteer in retirement, spending time with the Tucson-Sonoran Desert Museum, Native Seeds/SEARCH, and Interlochen. He enjoyed traveling with family and friends, and later in life visited South America, Egypt, drove the Alaska Highway and took a month-long cruise to Antarctica. He was a snowbird in Arizona for many years and enjoyed taking Amtrak back and forth.

Steve is survived by his children Rebecca Nold and Lynne (John) Shetron-Rama, grandchildren Natalie and Andrew Nold, and Benjamin and Elaine Rama. Preceding him in death are his father and mother John Henry and Veeva C. (Sworts) Shetron, his older brother John Shetron Jr, and his wife of 43 years, Ruth (Strobel) Shetron.

When not commuting between states, Doug delighted in being a grandfather and spending time with his wife and children. He was a fellow deer hunter and fan of the Vikings, along with any team who beat the Packers. Doug was a gifted musician, playing piano for his family and friends and sharing his beautiful singing voice with the church choir. He loved to read and collected a large library of books, ranging from countless technical tomes to science fiction and fantasy novels. One of Doug’s greatest passions was teaching and sharing his knowledge with others as well as tinkering with electronics.

Before Blizzard T. Husky became Michigan Tech’s official mascot in the late 1990s, there were several iterations of the Husky mascot.

What are your memories of Tech’s mascot? Tell us below!

Bill ’71 and Kathy ’71 Wassberg were the first students to put on a mascot suit. They came up with the idea to hold a reunion for all mascot students during Alumni Reunion on campus August 4-6, 2022.

Did you or someone you know put on the mascot suit for Michigan Tech? We’d love to connect with you. Email us at alumni@mtu.edu. 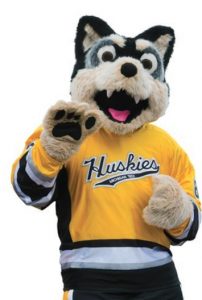 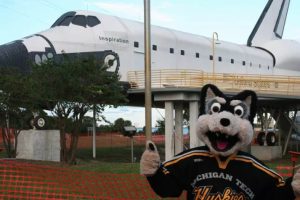 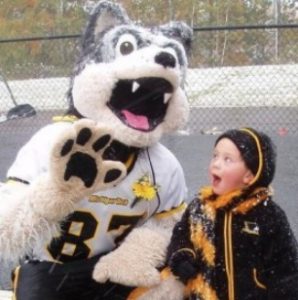 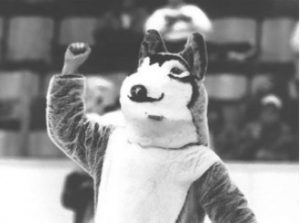 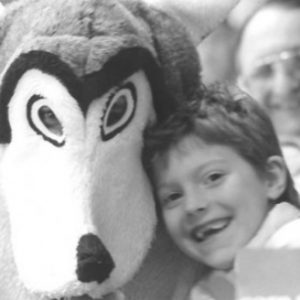 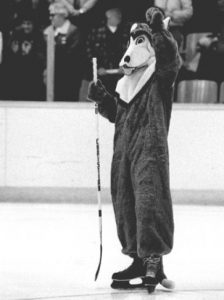 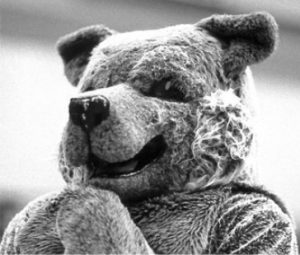 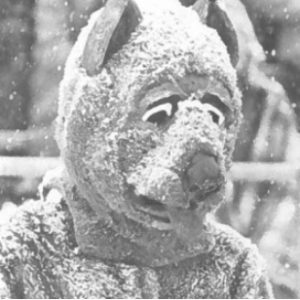 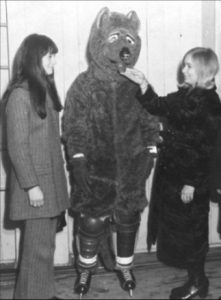