Saeid Nooshabadi (ECE/ICC) is the principal investigator on a project that has received $349,988 from the National Science Foundation for the project, “Collaborative Research: ACI-CDS&E: Highly Parallel Algorithms and Architectures for Convex Optimization for Realtime Embedded Systems (CORES).” This is a three-year project.

Embedded processors are ubiquitous, from toasters and microwave ovens, to automobiles, planes, drones and robots and are typically very small processors that are compute and memory constrained. Real-time embedded systems have the additional requirement of completing tasks within a certain time period to accurately and safely control appliances and devices like automobiles, planes, robots, etc. Convex optimization has emerged as an important mathematical tool for automatic control and robotics and other areas of science and engineering disciplines including machine learning and statistical information processing. In many fields, convex optimization is used by the human designers as optimization tool where it is nearly always constrained to problems solved in a few hours, minutes or seconds. Highly Parallel Algorithms and Architectures for Convex Optimization for Realtime Embedded Systems (CORES) project takes advantage of the recent advances in embedded hardware and optimization techniques to explore opportunities for real-time convex optimization on the low-cost embedded systems in these disciplines in milli- and micro-seconds.

Chee-Wooi Ten (ECE) is the lead principal investigator on a project that has received a $348,866 research and development grant from the National Science Foundation (NSF). Yeonwoo Rho (Math/ICC) is the Co-PI on the project “CPS:Medium: Collaborative Research: An Actuarial Framework of Cyber Risk Management for Power Grids.” This is a three-year project.

There are two investigators from University of Wisconsin-Milwaukee.

As evidenced by the recent cyberattacks against Ukrainian power grids, attack strategies have advanced and new malware agents will continue to emerge. The current measures to audit the critical cyber assets of the electric power infrastructure do not provide a quantitative guidance that can be used to address security protection improvement. Investing in cybersecurity protection is often limited to compliance enforcement based on reliability standards. Auditors and investors must understand the implications of hypothetical worst case scenarios due to cyberattacks and how they could affect the power grids. This project aims to establish an actuarial framework for strategizing technological improvements of countermeasures against emerging cyberattacks on wide-area power networks. 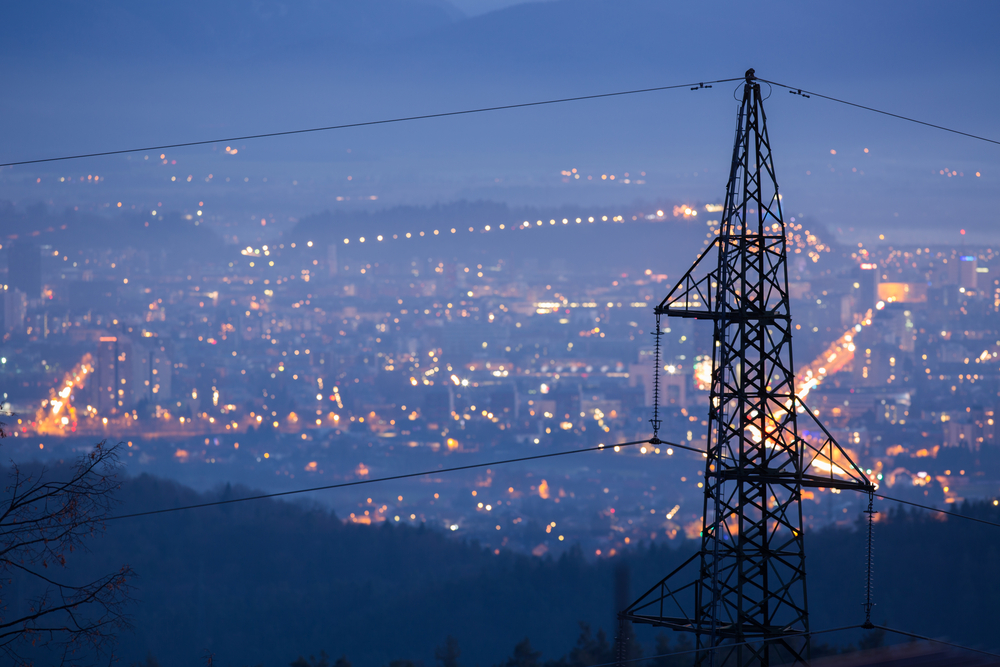 Elena Semouchkina (ECE/ICC), is the principal investigator on a project that has received a $337,217 research and development grant from the National Science Foundation (NSF). The project is “Developing Anisotropic Media for Transformation Optics by Using Dielectric Photonic Crystals.” This is a three-year project.

Transformation optics (TO) is based on coordinate transformations, which require proper spatial dispersions of the media parameters. Such media force electromagnetic (EM) waves, moving in the original coordinate system, to behave as if they propagate in a transformed coordinate system. Thus TO introduces a new powerful technique for designing advanced EM devices with superior functionalities. Coordinate transformations can be derived for compressing, expanding, bending, or twisting space, enabling designs of invisibility cloaks, field concentrators, perfect lenses, beam shifters, etc., that may bring advances to various areas of human life. Realization of these devices depends on the possibility of creating media with prescribed EM properties, in particular, directional refractive indices to provide wave propagation with superluminal phase velocities and high refractive indices in the normal direction to cause wave movement along curvilinear paths. Originally, artificial metamaterials (MMs) composed of tiny metallic resonators were chosen for building transformation media. However, a number of serious challenges were encountered, such as extremely narrow frequency band of operation and the high losses in metal elements. The proposed approach is to use dielectric photonic crystals to overcome these major limitations of MM media. This project will allow graduate and undergraduate students, especially women in engineering, to participate in theoretical and experimental EM research. Outreach activities include lectures and hands-on projects in several youth programs to K-12 students.

Funeral services were held over the weekend for the former CEO of the Upper Peninsula Power Company and a distinguished Michigan Tech Alumnus, Elio Argentati.

According to his obituary on the Jacobs Funeral Home website, Argentati was a 1950 graduate of the Michigan College of Mining and Technology (now Michigan Technological University) with a bachelor’s degree in electrical engineering.

He joined the Upper Peninsula Power Company in 1960 as an applications engineer and rose up through the ranks eventually becoming president, chairman of the board and CEO in the corporate office in Houghton, retiring in 1994.

He was active in the Michigan Tech Alumni Association and a member of the Golden M Club. In 2012 he was awarded the Board of Control Silver Medal.

Funeral services were held Saturday at St. Agnes Catholic Church in Iron River, with interment in the Resthaven Cemetery in Iron River.

Havens and Pinar also attend the Invited Workshop on the Future of Fuzzy Sets and Systems in Rothley, UK. This event invited leading researchers from around the globe for a two-day workshop to discuss future directions and strategies, in particular, to cybersecurity. The event was hosted by the University of Nottingham, UK, and sponsored by the National Cyber Security Centre, part of UK’s GCHQ. 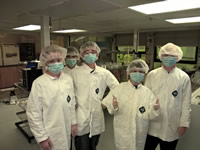 The students learned about the fabrication of silicon-based devices and how silicon wafers are produced. Additionally, they had hands-on experience in the cleanroom and used the photolithography process to transfer a pattern on a photomask to a silicon wafer. The pattern had a scale on it from 100 um (diameter of a human hair) to 1 um (diameter of bacteria) to allow the students to understand the scale that MFF users work at.

The students also hand cleaved silicon wafers to produce dies of gold Michigan Tech logos as a keepsake for their time in the MFF. A similar event is planned for another SYP group this Tuesday (July 25).

By Electrical and Computer Engineering. Read more at the Microfabrication Core Facility, by Chito Kendrick.

The students suited up and worked in the cleanroom to learn about fabricating silicon-based products. At the end, silicon wafers were transformed into dies of gold Michigan Tech logos through the process of photolithography. 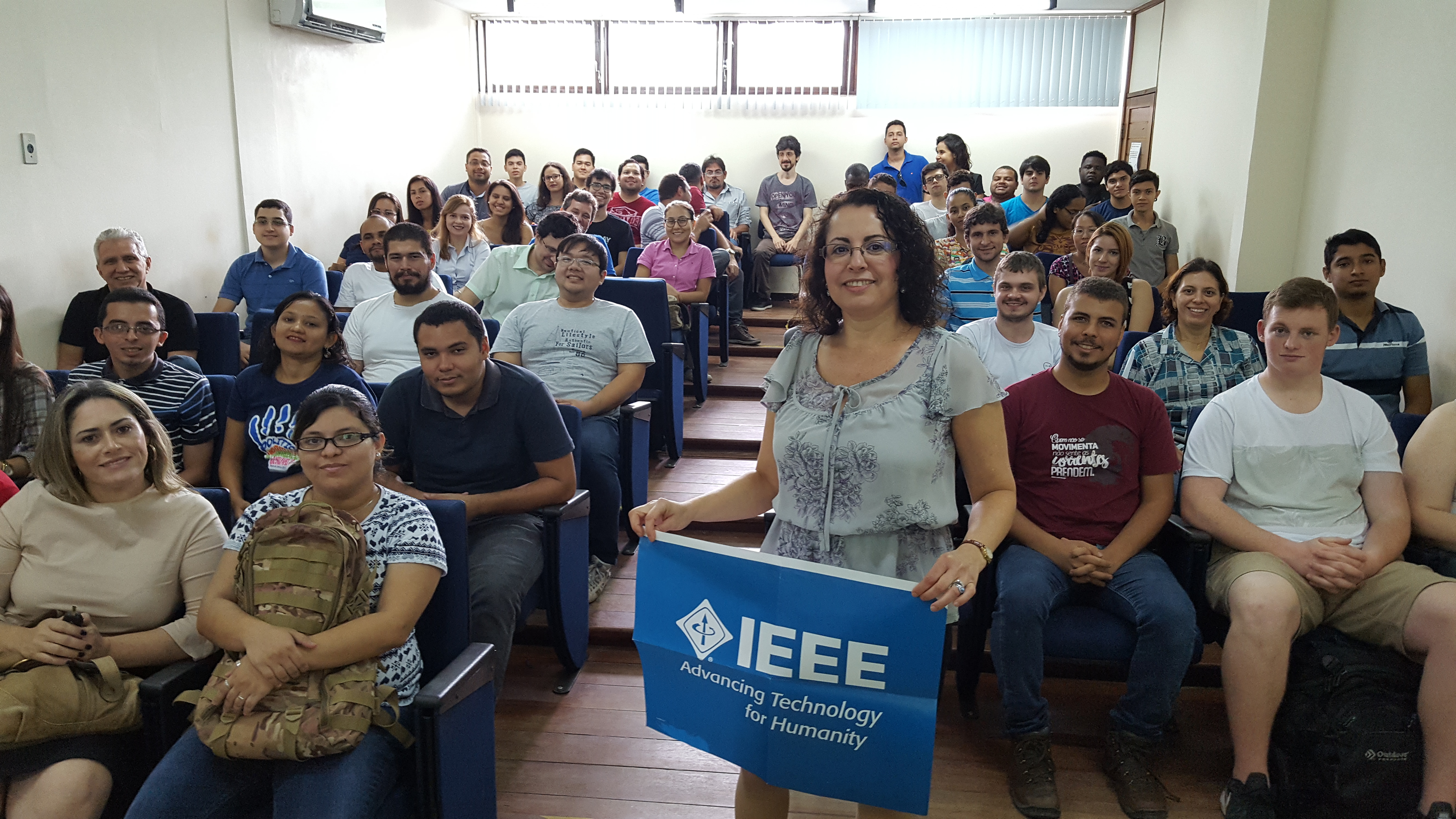 Aurenice Oliveira (ECE) and several students from the Pavlis Honors College recently traveled to Federal University of Pará (UFPA) in Belem, Brazil. The purpose of the visit is two-fold. The work involving the students is to gather information to help determine the needs of the people in the Belem area and develop sustainable communication solutions, backed by the community, to isolated areas. The students involved in the Pavlis Global Leadership Pathway pilot program will spend five weeks immersed in the environment and culture of Belem, Brazil. 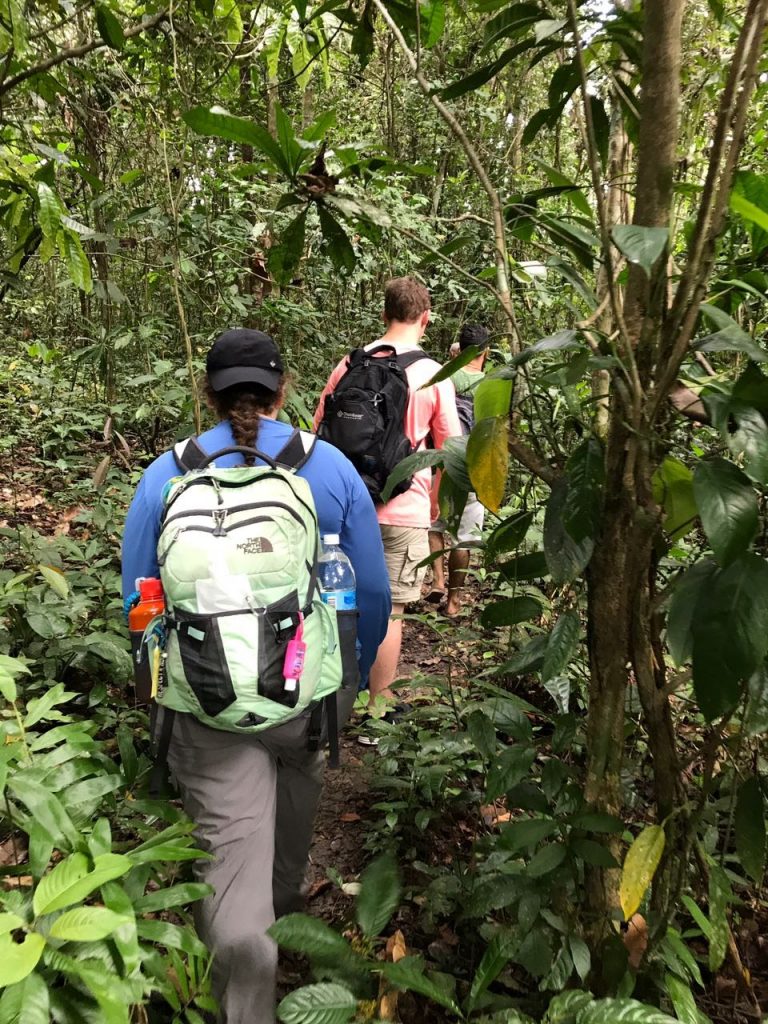 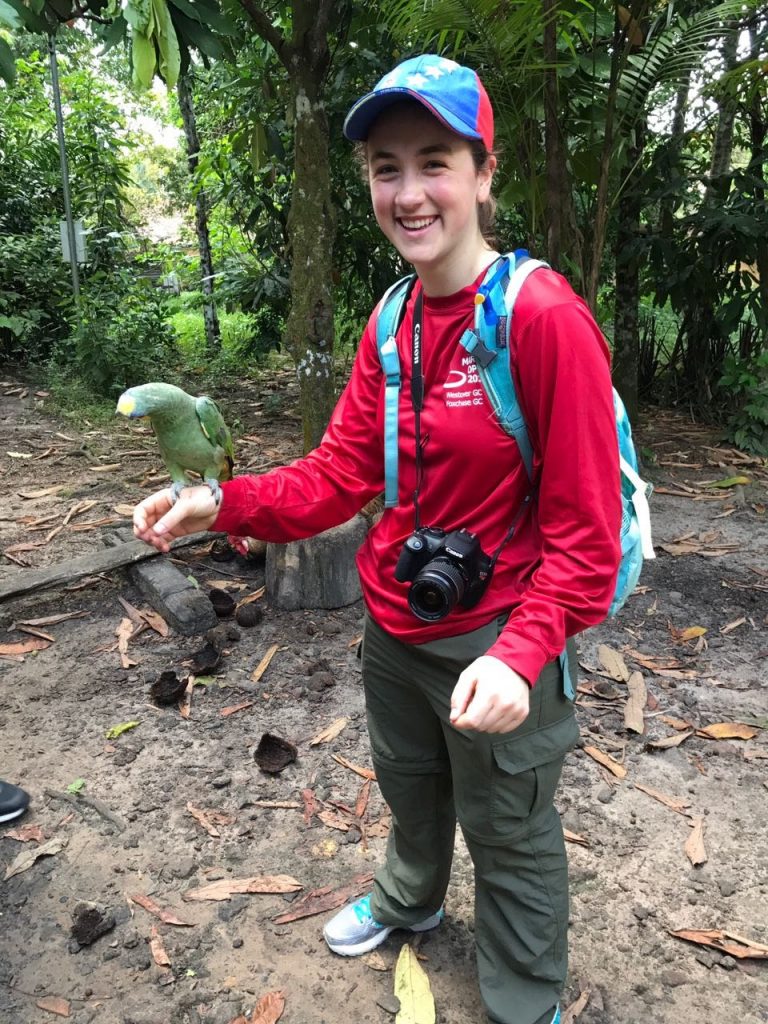 While at UFPA, Dr. Oliveira gave an invited talk hosted by the IEEE Communication Society Student Branch titled “Enabling Autonomous Vehicles with Vehicular Communication Networks.” The presentation was open to the entire UFPA community of students, faculty, and staff. The talk included an introduction to vehicular communication networks and how these networks can support autonomous vehicles. Vehicular Networking has emerged as one of the most important technologies to enable a variety of applications in the areas of: safety, traffic efficient and eco-friendly transportation, and Infotainment. Vehicular Ad Hoc Network (VANET) is the supporting network for Intelligent Transportation Systems services.

Jeremy Bos (ECE/RICC) is the principal investigator on a project that has received a $106,032 research and development grant from the US Department of Defense, Air Force Office of Scientific Research.

The project is titled “Imaging Theory and Mitigation in Extreme Turbulence-Induced Anisoplanatism.”

This is the first year of a three-year project potentially totaling $331,550.