Over the past few months Andi Barajas (full time CTT  staff and part time STC student), Cassandra Matchinski and  Stephanie Hubble (both full time STC student and CTT interns) have been working with Shaughn Kern and Carol Reynolds (full time professional technical writers at CTT) to develop logos for the National Local Technical Assistance Program Association (NLTAPA http://www.ltap.org/about/) as part of a national competition.  The NLTAP Association represents the 58 LTAP and TTAP (tribal) centers across the US.  On an annual basis the centers jointly  train over 174,000 people, in  nearly 6,200 training sessions, and circulate more than 795,000 publications according to the NLTAP website.  The LTAP/TTAP program has been in existence since 1982 when it was formed by the US Federal Highway Administration (FHWA).

I’m happy to announce that  Stephanie Hubble’s entry was selected to be the new logo for the national association and will be used on official NLTAPA business systems such as letterhead and the website.  I also understand that two of the Michigan Tech submitted entries for the competition made the top three.  I think competing and winning on a national level is a testament to the skills and creativity that our staff and students have.  The winning logo will be announced/unveiled at the NLTAPA annual conference in Savannah, GA on July 20th.  Unfortunately Stephanie is overseas this summer and will not be able to attend the conference to receive the award, however a Andi will be at the conference accepting the award for the center.

Congratulations to all of the staff and students that worked on this competition.

Message from Lauren Keenan in Barcelona 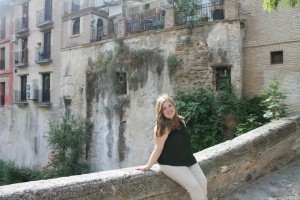 Lauren Keenan has posted this message on our International Programs and Services Facebook page about the great time she’s having in Spain with our Michigan Tech faculty-led program:

“My Study Abroad to Barcelona has taught me how to understand how history and memories influence culture. In addition, I have learned to apply the observations in film, literature, politics, and everyday life to fully comprehend how a city shapes you. This is why we need humanities, they challenge us to think critically in a way we never have before. No one fully understands the importance of studying abroad until you’ve had the experience yourself.”

The Graduate School has announced the awarding of finishing fellowships to the following outstanding PhD candidates, including the Humanities Department’s own Gary Kaunonen:

You can learn more about the candidates here.