Learn more about the films, events, sponsors and how to reserve your ticket online. For more information email 41north@mtu.edu.

(by Erin Smith. This article originally appeared in TechToday.) 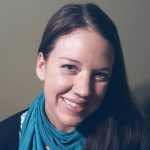 RTC PhD candidate Lindsay Hingst’s dissertation, “A Pedagogy of Witnessing: Linguistic and Visual `Frames’ of the Dark Side in the Multimodal Classroom,” focuses on the theoretical and practical benefits of implementing written, oral, and visual testimonies from traumatic history as a tool for teaching the importance of empathetic and ethical composition practices. Specifically, the dissertation provides resource material for a critical pedagogical model that supports “responsible witnessing” through short writing assignments and a final research project that analyze selected narratives, historical accounts, images, and films spanning World War II and the Vietnam War to more recent global events. HIngst hopes that her work will be of interest to teachers of composition and communication and students who wish to bring approaches to understanding and responding to human suffering and social injustice into the classroom.