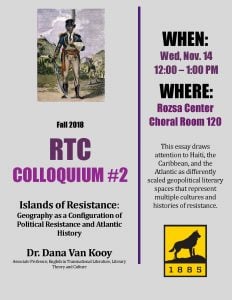 In the Romantic period, islands of resistance constitute a global expanse of spatial and temporal assemblages that encompass isolated rural agricultural estates, mining districts, mountain ranges, and wild “wastelands.” Metropolitan areas and cities can also be represented as islands, as well as nations and other geo-politically defined areas. For the purposes of this essay, I will focus more specifically on the island of Haiti. This island represents a geo-historical watershed: intertwining slave revolts, reactionary invasions, and revolutionary acts of independence, which culminated in the collective establishment of the first independent black state in the New World.

Focusing specifically on Leonora Sansay’s narrative depictions of Haiti’s history and its Revolution in her novel, Secret History (1808), I want to locate and map the shifting depictions of Haiti’s geography and how these markers shape, challenge, erase, and make manifest the many political possibilities for this island of resistance.